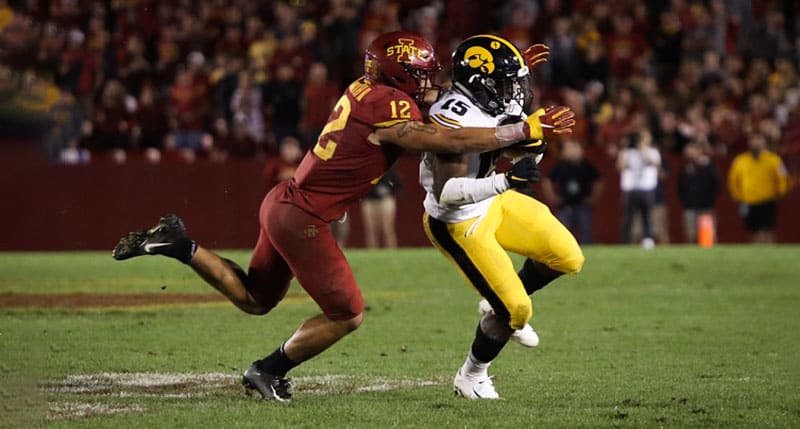 How to Bet Iowa vs. Iowa State in Week 2

Hardcore college football fans were ecstatic to watch a few Top 25 matchups during Week 1. The slate for Week 2 doesn’t have quite as many marquee matchups. However, this fierce intrastate rivalry between Iowa and Iowa State may end up being the most exciting game on the betting board.

Though these schools are from different conferences, this is one of the most heated rivalries in college football. Iowa rolls into Ames after giving the Indiana Hoosiers a royal beatdown in Week 1. Iowa State barely squeaked by Northern Iowa 16-10 last week.

Kickoff is set for 4:30 Eastern Time at Jack Trice Stadium in Ames, Iowa. In this article, we’ll give you a brief look at each team’s offense and defense. We’ll also let you know who we are betting on in this intense matchup.

Oddsmakers are expecting this to be a tight contest as most online sportsbooks have the Cyclones favored by four to four and a half points. Though it’s still early in the week, most of the early action has been on Iowa. This is understandable since the Hawkeyes are coming off such a dominating performance.

Before betting on this or any other Week 2 game, be sure to shop odds using our free odds comparison tool. This nice tool will let you know where to get the best odds and line for your bet.

Here’s a live look at the best point spread and total for Iowa @ Iowa State!

What to Expect from the Iowa Offense in Week 2

Boy howdy did the Iowa rushing attack look imposing against Indiana or what? The Hawkeyes offensive line looked like a strong unit as the running game produced 158 yards. Running back Tyler Goodson led the way on the ground for Iowa with 99 yards on 19 carries. Ivory Kelly-Martin also chipped in with 44 yards on eight carries.

Iowa head coach Kirk Ferentz is an old-school guy that loves to play smash-mouth football. Ferentz is likely to hand the ball off at least 30 times like he did against Indiana. The key matchup to keep an eye on is the Iowa offensive line against the Iowa State defensive line. If the big boys up front can get Goodson going, Iowa has a great chance of pulling the outright upset.

Hawkeyes QB Spencer Petras didn’t have to do too much against the Hoosiers in Week 1. The 6-5 233 pound junior only threw for 145 yards. Expect Ferentz to call a few deep play-action passes to try to keep the Cyclones defense from loading the box.

What to Expect from the Iowa State Defense in Week 2

Iowa State’s defense bailed out the offense in an ugly 16-10 win over Northern Iowa. The Cyclones defense gave up a few chunk plays in the passing game but their rush defense was just plain nasty. Northern Iowa was only able to average 1.7 yards per rush against the Cyclones bullying defensive line.

Cyclones head coach Matt Campbell knows that the Hawkeyes love to run the ball. Look for Campbell to stack the box to try and take away the Iowa running game. The Iowa State defense will probably dare Petras to beat them deep down the field.

Also, expect the Cyclones to send linebackers Mike Rose and Jake Hummel on some delayed blitzes to make Petras uncomfortable. Both Rose and Hummel are tackling machines and well-rounded defensive players.

What to Expect from the Iowa State Offense in Week 2

The Iowa State passing game was efficient but not explosive against Northern Iowa last weekend. Senior QB Brock Purdy did complete 21 of his 26 passes but he only racked up 199 passing yards. Since the Hawkeyes have such a stout run defense, Purdy is going to have to find success down the field.

Cyclones running back Breece Hall is a legitimate Heisman candidate but he got off to a slow start against Northern Iowa and never really got in gear. The 6-1 220 pound junior only rushed for 69 yards last week so expect him to be supremely focused against Iowa this week. Campbell may have to get Hall more involved in the passing game if the Hawkeyes defense tries to take away the run.

What to Expect from the Iowa Defense in Week 2

The Hawkeyes’ defense was absolutely stellar against Indiana last week. The unit only registered one sack but did have five tackles for loss. What was really impressive was how Iowa’s defense baited Indiana QB Michael Penix Jr. into three interceptions.

It may be a bit tougher for the Iowa defense to slow down the balanced Iowa State offense, but look for Ferentz to keep linebacker Seth Benson around the line to try and take away Hall and the Cyclones rushing attack. Defensive back Riley Moss will try to have back-to-back unbelievable games after registering two pick-sixes against the Hoosiers.

We lean slightly to the Cyclones since they are at home and have the more experienced quarterback. However, we don’t feel comfortable laying four and a half points in a bitter rivalry game. Our favorite bet in this contest is on the Under!

Both of these teams love to run the ball, which will keep the clock moving for most of the game. Both teams have ferocious rush defenses as well.

Remember, both Iowa and Iowa State were ranked in the Top 10 against the run in 2020. We see a classic barn burner with the total ending up somewhere in the 30s. Take the UNDER 46! Best of luck!