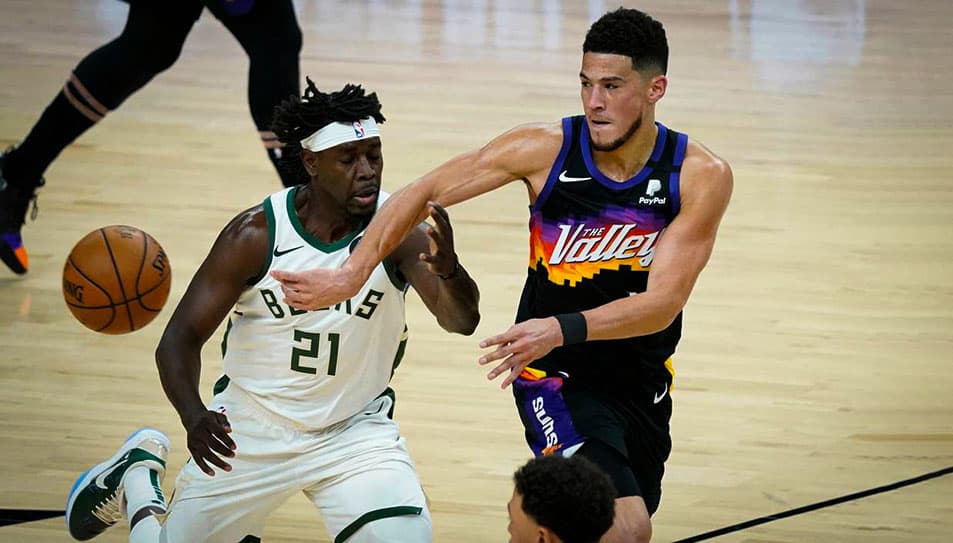 How to Bet Game 2 of the NBA Finals

Game 1 of the NBA Finals played out very similarly to the two most recent game ones played by the Milwaukee Bucks in this post-season. Their bigs were exploited by the opponent switching and scoring on them at will in drop coverage, and by the time coach Budenholzer was ready to make significant adjustments the game was out of reach.

This was exactly the way the Bucks dropped their first game against both Atlanta and Brooklyn. Let’s see if the Bucks can change something up in Game 2! As a reminder, you can always find the best odds for each side of this game using our free odds checker:

Phoenix ended up winning the first game in the series 118-105. This was only the second time Milwaukee's top-rated playoff defense gave up 118 points through their entire postseason run of 17 games. Phoenix entered the game with only the 10th best offensive rating among all playoff teams and the Suns haven't reached 118 points in 11 out of their 16 games in the Western Conference. What went wrong?

The Bucks Must Go Small and Stop Fouling

The small ball lineups have been working amazingly for Milwaukee through the playoffs and coach Budenholzer’s decision to play Giannis Antetokounmpo and P.J. Tucker at the center position instead of Brook Lopez and Bobby Portis won them the fourth quarter by three points. It was too little too late though with the Suns building up a double-digit lead by that point.

Phoenix built most of its lead by switching Devin Booker and Chris Paul onto Brook Lopez and Bobby Portis. Both Booker (27 points, 2 rebounds, 6 assists) and Paul (32 points, 4 rebounds, 9 assists) got to the rim at will and besides the easy layups, they were also making most of their floaters from range.

Neither Lopez nor Portis were quick or agile enough to slow down the two superstars and they were actively hurting the Bucks by fouling more than they should have. The Suns had a free throw rate (free throws made per 100 field goal attempts) of 29.8 compared to Milwaukee's 10.2. The Suns made 25 of 26 free throw attempts, while the Bucks only hit 9 of 16 attempts. This alone would have been enough to decide the game.

Phoenix also had the better turnover rate in Game 1. The Suns only turned the ball over 9 times, while Milwaukee had 13 turnovers.

Easy Buckets in the Paint

Most of Milwaukee’s postseason success came through easy buckets in the paint. Before the Suns series, the Bucks had multiple games where more than 40% of their shots came from the restricted area.

In Game 1 of the Finals, the Bucks only put up 27% of their shots from within 4-feet of the rim and they only shot 61.9% on these, which is well below league average. On the other side, the Suns put up 29% of their shots from the restricted area, and they were shooting 76.2% from these attempts.

Much of the lack of paint scoring did come from the compromised mobility of Giannis Antetokounmpo. Milwaukee’s superstar hyperextended his knee in Game 4 of the Atlanta series and this was the first time we’ve seen on the floor since the incident. Giannis was tagged as doubtful before the game and upgrade to questionable not too long before the tip-off.

While Giannis was the lone starter with a positive plus/minus rating on the Bucks and his state line looks decent at first look, he only made 7 of 12 free throws (58.3%) and 11 total field goal attempts are extremely low for a player of his caliber.

In the two regular-season matchups between these squads, Giannis scored 33 and 47 points. Those are the type of performances the Bucks need from him. He moved better in Game 1 than we expected given the severity of his injury and knowing his injury history, but he was looking visibly tired just three quarters in and came up limping after a collision with Jae Crowder.

With only one day off between the first two games of the series, we wouldn’t expect huge improvements to Giannis’s health, but he could look much better by Game 3, as the teams have an extra day off before the series moves to Milwaukee.

The Bucks got 44 great minutes from Khris Middleton, who was easily their best player on the floor finishing with 29 points, 7 rebounds, and 4 assists, but Jrue Holiday was a non-factor in Game 1. Holiday finished the game in -16 by only making 4 field goals out of 14 attempts (28.6%) and missing all 4 of his three-point attempts. The Bucks might have asked too much of him though.

Holiday is Booker’s defender, the primary playmaker of the Bucks offense, and he has an important role in the scoring department as well. With Giannis still nursing the knee injury, Middleton will need some help on the offensive end, but Holiday seemingly has to many things on his hand.

We’ve seen some smart adjustments from coach Budenholzer late in Game 1, but there were too many things going the Suns’ way. We expect Holiday to have a better game on Thursday, but the high load on Giannis is extremely concerning, especially if he has to shoulder most of those minutes playing in the center position going up against the opposing big men.

The Suns are simply much healthier at this point and they have way better wing depth as well. Phoenix has a much higher floor than Milwaukee. Both Cameron Payne and Cameron Johnson put up 10 points each in the first game while the Bucks bench was mediocre at best. Game 2 could be closer with the Suns not enjoying extra rest anymore, but we would still expect them to win and cover the spread as well. There are too many things that would need to click for Milwaukee to even up this series.