Houston vs Kansas - Betting Preview and Our Best Bet 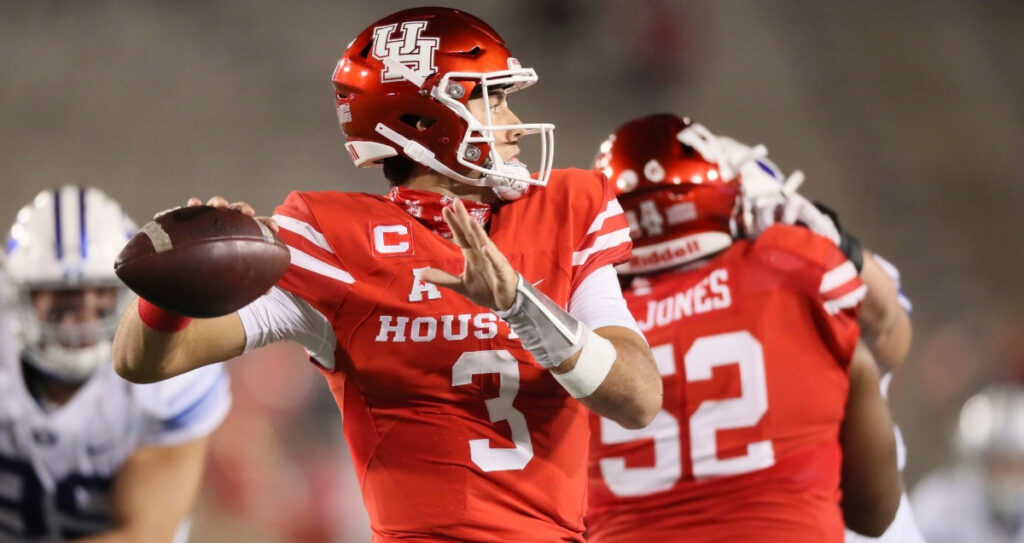 Clayton Tune should provide plenty of offense for Houston vs Kansas. Check out our betting preview and best bet!

The Houston Cougars strolled into Lubbock, Texas, last week looking to become a debutante at the CFP ball, needing only a win over Texas Tech to further their coronation. The Red Raiders were not accommodating hosts, however, earning a 33-30 victory over the No. 24-ranked Cougars and crashing Houston’s dreams to crash the playoffs as a Group of 5 member.

The Kansas Jayhawks, meanwhile, went into Morgantown, West Virginia as a two-touchdown underdog looking to gain respect in the Big 12 Conference. They did just that, erasing a 14-point deficit twice in their contest with West Virginia to win 55-42 in overtime.

In a contest between two future Big 12 Conference foes, will Houston regain its glass slipper to be the Cinderella team in a New Year’s Six bowl game? Or will undefeated Kansas win its second road game this season, a feat the Jayhawks haven’t accomplished in more than 15 years?

What to Expect from Kansas Offense vs Houston

A lethal read-option spread offense helmed by an athletic and accurate quarterback. Junior Jalon Daniels is a difference maker. Through two games, Daniels has passed for 408 yards with a 70% completion rating and ran for 114 yards on 15 attempts. Back-to-back wins gave Daniels a 3-2 record starting for the Jayhawks.

Beyond his athleticism, Daniels’ dynamic ability to choose the best option in the rushing game has been superb, making his decision-making skills as impressive as his statistics through two games. Overall, the Kansas ground attack is punishing opposing defenses, rushing for 500 yards and 11 TDs thanks to their underappreciated offensive line.

What to Expect from Houston Defense vs Kansas

The Houston Cougars retooled their 4-2-5 after losing several players in the offseason. Still, the front six has looked formidable to begin the season with Derek Parish, a senior lineman that has recorded 4.5 sacks and 6.5 TFLs.

Adding in LB Donavan Mutin and his team-leading 20 tackles, including 3.5 TFL, the Cougars have excelled at getting pressure up front as well as limiting opponents to 3.0 yards per rush.

Houston’s defensive backfield has been more hit-or-miss to start the year. Through the first two games of the season, the Cougars have intercepted four passes but are yielding 10.8 yards per completion. Conversely, Houston has also allowed five TDs through the air against pass-oriented offenses.

What to Expect from Houston Offense vs Kansas

A spread offense that has sputtered to start games. Combined, Houston has scored 10 first-half points in two games and went into halftime losing both contests. To make it to overtime in those games, the Cougars required fourth-quarter comebacks of 14-point deficits.

Despite the slow starts, senior QB Clayton Tune has been efficient. The Carrollton, Texas, native has completed nearly 60% of his passes for 472 yards and four TDs to start the season. Backfield teammate Brandon Campbell has tallied a team-best 129 yards rushing and 64 yards receiving to start the year.

What to Expect from Kansas Defense vs Houston

A bend-but-don’t-break mentality and big-play capability defines the 2022 Kansas Jayhawks defense. Against the Mountaineers, Kansas surrendered over 500 yards to a pass-happy offense.

Yet when it mattered, the Jayhawks capitalized on WVU’s mistakes. In the 3rd quarter, Kansas recovered a muffed punt, scoring the go-ahead TD to cap off a 21-0 run by the Jayhawks. And in overtime, the Jayhawks picked off WVU’s JT Daniels, sealing their victory with a pick-six by Cobee Bryant.

Kansas has nearly covered the over/under spread by itself in their first two games as the Jayhawks have a combined total of 111 points. Houston has covered the over in both games this season as well, but the team has needed overtime in both contests to do so.

Kansas as a ten-point underdog is very tempting against Houston. The Jayhawks have significantly improved in their second season under Lance Leipold, and a third win to start the season would not be surprising. Since the infamous Texas game in 2021, Kansas is 5-0 ATS and 4-1 to cover the over.