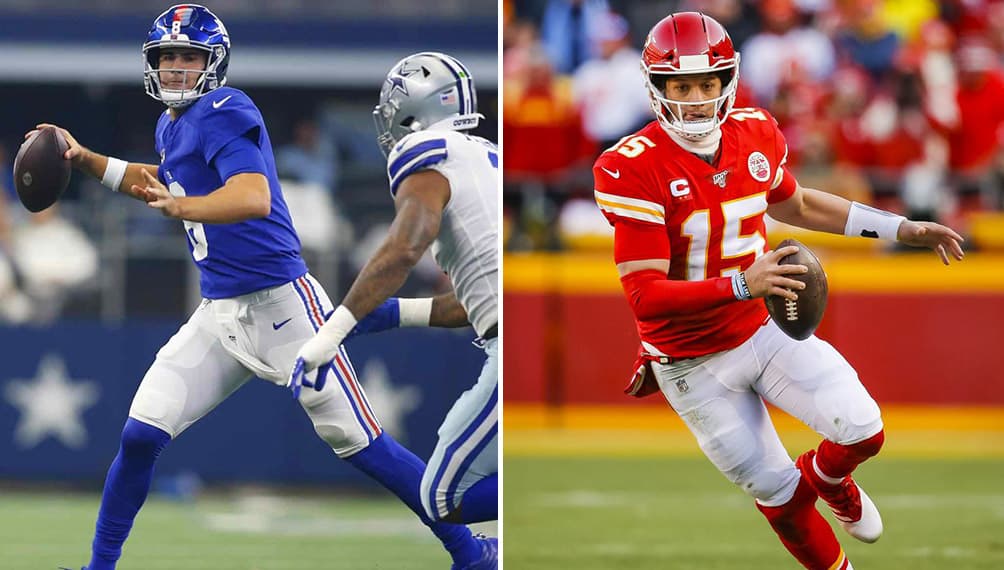 While we covered just about every betting angle for the Giants at Chiefs MNF matchup, we wanted to share our favorite DFS lineup for DraftKings Showdown contests as well.

As always, we recommend focusing on single-entry contests for every slate and particularly with these single-game slates. That being said, we are assuming the majority of our readers will take their shot at the $400,000 Play Action contest that features a $3 entry fee, so we are calling this our optimal lineup for that contest.

As always with these Showdown contests, we are starting both quarterbacks. If we had to pick one to throw in the captain spot, it would be Daniel Jones as he has flashed just as much upside as Mahomes this season, has more running upside, and comes at a $2,700 cheaper price.

That being said, it is Tyreek Hill that finds himself in the Captain's seat thank largely to his ridiculous upside. Hill's 40 point week 1 performance and 50 point week 4 performance are easily the top 2 fantasy totals from any player active tonight, and getting a 50% bonus on a game like that would almost guarantee that you finish inside of the cash line.

Mahomes will be 100% owned tonight and has to be in your lineup. The Giants' defense was expected to take another step forward in 2021, but their numbers are down across the board. They have allowed just under 290 passing yards per game on the road and should provide little resistance to Mahomes in a bounce-back game.

After starting the season hot, averaging 25 DraftKings PPG over his first four starts, Jones got knocked out of the Dallas game and struggled against the Rams and Panthers. We fully expect him to bounce back in what looks like a shootout in Kansas City. The Chiefs defense has been historically bad this season, allowing the second-most FPPG to opposing quarterbacks, and have been especially vulnerable to running QB's giving up an additional 7 DraftKings PPG.

Shepard is a lock if he is active for Monday Night Football, and if he ends up inactive he is an easy straight-swap for Kadarius Toney. Shepard has only three full games played this season but has averaged 12 targets per game in those starts. With Golladay banged up, Shepard will undoubtedly be the focal point of this passing attack tonight, and given the Chiefs give up a 68% completion percentage and 8.6 YPA, that should result in plenty of production.

Gano is clearly underpriced considering how tight player pricing is in the Showdown contest, and just how likely we are to have a shootout in this matchup. He clearly will have a higher ownership % than Butker, but I don't see how you don't play the kicker with 2x the number of field goals on the season and a 2x higher ceiling on the season.

I think you have to start either Robinson or Gordon tonight. If you believe OC Eric Bieniemy that the team is going to increase Gordon's snap count and role in the offense, maybe he is worth a dart. For me, I'm taking the guaranteed snaps with Robinson. If you look at Gordon's three games as a Chief, they are actually Robinson's three highest snap counts of the season. Meaning an increased role for Gordon will likely come at the expense of either Hardman, Pringle, or both. I'll take Robinson at $800, know he's going to get 50+ snaps, and hope I can steal a big play.