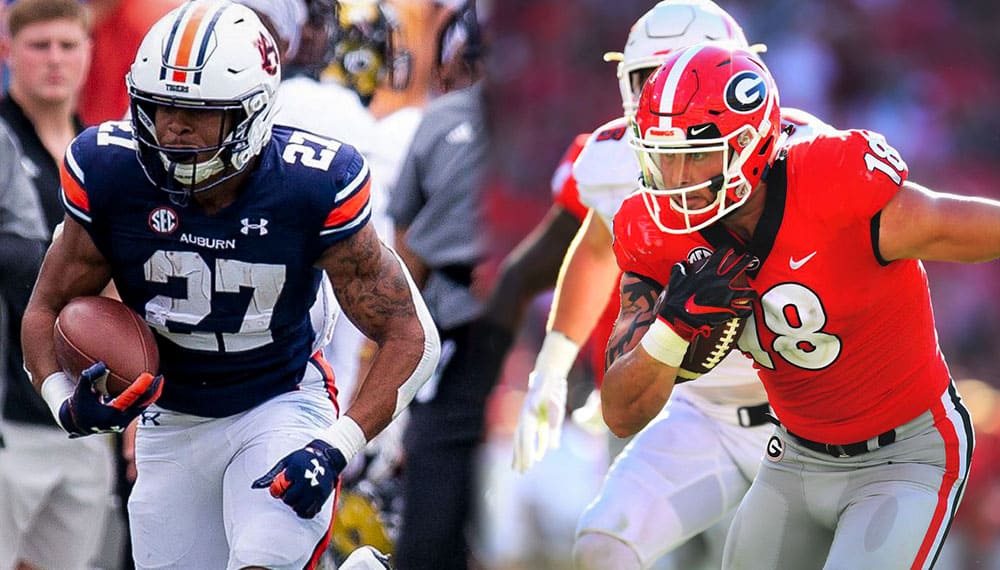 The Georgia Bulldogs travel to Jordan Hare Stadium to take on the Auburn Tigers in The Deep South’s oldest rivalry. Georgia (5-0) is ranked #2 in the country and just made a major statement by shutting out Arkansas 37-0 last Saturday. Auburn (4-1) pulled off a nice come from behind victory on the road at LSU in Week 5.

The kickoff is set for 3:30 Eastern Time and can be seen on CBS. Here’s a detailed preview of each team as well as a Best Bet for this SEC heavyweight matchup.

PointsBet is offering all new players a $200 bonus with any $20 NFL or CFB wager. This is our highest-rated promotion for the NFL Week 5 slate. Here is how it works:

Best Available Side and Total for Georgia Bulldogs at Auburn Tigers

Though both of these teams are ranked in the Top 25, the folks who set the point spreads are not expecting this to be a tight game. Georgia is currently favored by 15.5 to 16 points, depending on what online sportsbook you check. The total is sitting between 46.5 and 47.5.

Before betting on this or any other Week 6 college football game, pull up our free college football odds checker. This will help you find the best sportsbooks to place your wagers for the week. Finding an extra half a point in value could be the difference between a win and a loss.

At the time of publish, every US sportsbook had the line here at 15.5, with BetRivers offering the lowest juice on that number. Our bet of the week for this matchup is the under 47.5 current available at FanDuel sportsbook. Here’s a live look at the best available odds for Georgia at Auburn:

What to Expect from the Georgia Offense vs Tigers

The Bulldogs put the college football world on notice by throttling #8 Arkansas last weekend 37-0! Even without star QB JT Daniels, who missed the game with a lat injury, the Bulldogs whipped the Razorbacks from start to finish. Can you believe that Georgia only threw 11 passes the entire ball game? The Bulldogs will likely need a different strategy against a disruptive Auburn defensive line.

Georgia head coach Kirby Smart said that Daniels will be a game-time decision this week, so it very well could be Stetson Bennett under center once again for the Bulldogs. Bennett is nowhere near the passer that Daniels is, but he has quick feet and the ability to make some plays if he gets outside the pocket. Regardless of who is under center for the Dawgs, look for running backs Zamir White and James Cook to each get plenty of carries.

What to Expect from the Auburn Defense vs Bulldogs

The Tigers have done a good job on defense through the first five games of the season. This unit is only allowing 16.2 points per game and 4.7 yards per play (31st in the nation). This group should also be playing with plenty of confidence after holding LSU to only 19 points last week. Auburn has a pair of talented linebackers, Derrick Hall and Andrew Leota, who each have registered three sacks.

The Tigers’ secondary have given up their fair share of big plays this season. Guys like Roger McCreary and Smoke Monday have plenty of talent but they sometimes get burnt by playing too aggressively. Auburn is giving up 7.2 yards per pass attempt (62nd in the country). That could be a problem, especially if Daniels is able to start for Georgia.

What to Expect from the Auburn Offense vs Bulldogs

QB Bo Nix, who played terribly against Georgia State a couple of weeks ago, made several highlight-reel plays to lead the Tigers to victory last Saturday night. Nix has thrown for 979 yards and six TDs so far this season. He’ll have to get rid of the ball quickly against the ferocious Georgia defensive line.

We expect new coach Bryan Harsin to give the ball to RB Jarquez Hunter as much as possible. Hunter is averaging an insane 10.6 yards per carry this year and is the perfect complement to workhorse Tank Bigsby, who has found the end zone four times. The million-dollar question is how much success can the Auburn rushing attack have against a Georgia defense that only gives up 67.8 rushing yards per game.

What to Expect from the Georgia Defense vs Tigers

Do you know how many points per game this Georgia defense is allowing? 4.6, and no it’s not a typo! Needless to say, several players on this side of the ball have NFL type of talent. It’s not just one or two guys doing the majority of the damage either.

Five Bulldogs have more than one sack this season. Linebacker Adam Anderson leads the team with 4.5 sacks and Nakobe Dean isn’t far behind with 3.5. Look for Smart and defensive coordinator Dan Lanning to dial up the pressure on Bo Nix, especially on third down. The secondary is also opportunistic, as they’ve already picked off seven passes this year.

This is one of our favorite bets on the college football board for Week 6. These two teams have elite defenses and both know how to get off the field on third down. We just don’t see either offense being able to do much in this game.

If Daniels does indeed play for Georgia, that does help the Dawgs passing game. However, the former USC star is bound to be a little bit rusty after missing some games. That helps our case for the Under.

If Stetson Bennett plays, that limits Georgia’s passing game. Auburn’s defense will then be able to stack the box to slow down Zamir White and James Cook. That would also help out the Under.

We expect the Bulldogs to get out to an early lead and then try to run out the clock, much like they did last week against Arkansas. Georgia runs the ball nearly 56% of the time, so the clock will be running fast.

We see Georgia winning 24-10 so take the Under!