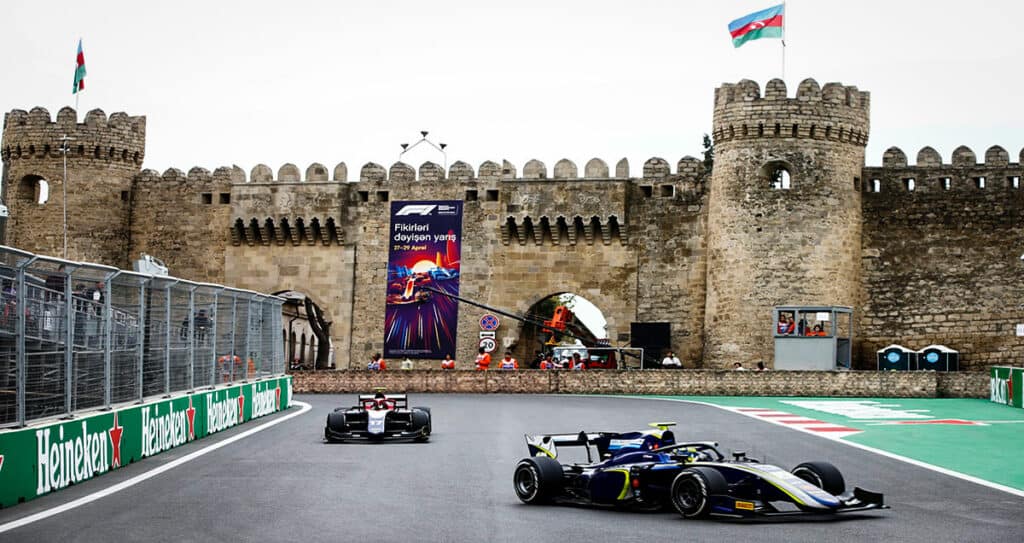 Current odds and our best bets for Sunday's F1 race in Baku.
By Nicholas Berault on June 10, 2022

On the heels of the Monaco Grand Prix, where on track overtaking is least likely to happen of any race in Formula 1, racing fans and bettors are treated to the Baku City Circuit for the 2022 Azerbaijan Grand Prix. This is the sixth edition of a Formula 1 race at this venue which, along with Jeddah in Saudi Arabia, tops out among the fastest street circuits on this year’s calendar. In fact, Valterri Bottas broke the Formula 1 speed record at this track in 2016 when he was clocked going 378 kph (235 mph) down the nearly 1.4 mile straight that leads to the start/finish line.

The 2021 Azerbaijan Grand Prix was marred by two high-speed tire failures down that long straight, first for Lance Stroll of Aston Martin on lap 30 and second for race leader Max Verstappen on Lap 46. This led to a full race stoppage and eventually a wildly entertaining restart. Mercedes’ Lewis Hamilton gained track position and took the lead from Red Bull’s Sergio Pérez before locking up his tires trying to brake into turn 1. This eliminated him from any chance at a race win or even a points finish, and fans saw that translate to a podium featuring Pérez, Aston Martin’s Sebastian Vettel, and Pierre Gasly of Scuderia AlphaTauri.

Looking ahead to this year’s Azerbaijan GP, there’s no doubt that Verstappen is looking to validate his dominant performance from 2021 that ended in a DNF by winning the race. It’s probably fair to say that there is some added motivation there after seeing his teammate win in Monaco two weeks ago as well. For a driver that doesn’t need any extra reason to be aggressive and push his car to the limit, we’re eager to watch him this weekend.

Here are the current odds to win on Sunday:

To quickly recap our best bets in Monaco, we won with Charles Leclerc qualifying on pole (-130) and Vettel finishing in the points (+250). A botched pit stop strategy by Ferrari cost us a double podium win at +122 odds and Red Bull had the fastest pit stop as the odds expected to bring us to 2-2 and a +1.27 unit weekend. We look to continue these winning ways in Baku.

We have four bets for this weekend's Grand Prix in Baku, all odds shown come from DraftKings Sportsbook.

Baku City Circuit has some of the slowest-speed corners on the F1 calendar, which would typically favor a car with more downforce like Ferrari's. Red Bull’s 2022 car, much like last year’s, is known for it’s straight-line speed relative to their competition. The great equalizer on a track where both types of aero packages are beneficial tends to be long straights that give driver’s the chance to open their Drag Reduction System (DRS) and chase down cars from behind. We expect Max to be able to finish first even if he doesn’t start from pole position.

Leclerc has been dominant in qualifying recently despite his poor record of translating that track position to race wins. In what would be unfortunate for him and the Scuderia, we anticipate more of the same happening this weekend. We’re not confident his Ferrari will be able to keep Verstappen behind for the entirety of the race, but we do believe in his ability to nail one lap better than the field in qualifying.

Both teams are struggling on street circuits this season, with Nicholas Latifi being the first driver to DNF in Jeddah (while Mick Schumacher withdrew due to a qualifying crash) and Kevin Magnusson matching that feat in Monaco where three of the four drivers on these teams did not finish. It feels incredibly optimistic to think that all four Haas and Williams cars will complete the 51 laps in Baku, and we’ll spread a unit across these two plays in the expectation that one of them beats all other teams to the garage before the checkered flag.

We’re confident Red Bull will have the race pace advantage, and also see Leclerc doing everything in his power to either maintain a lead or hold onto the back of whichever Red Bull leads the race. These three drivers are beginning to separate from the field this season, and we expect the Azerbaijan GP to be the next example of that.