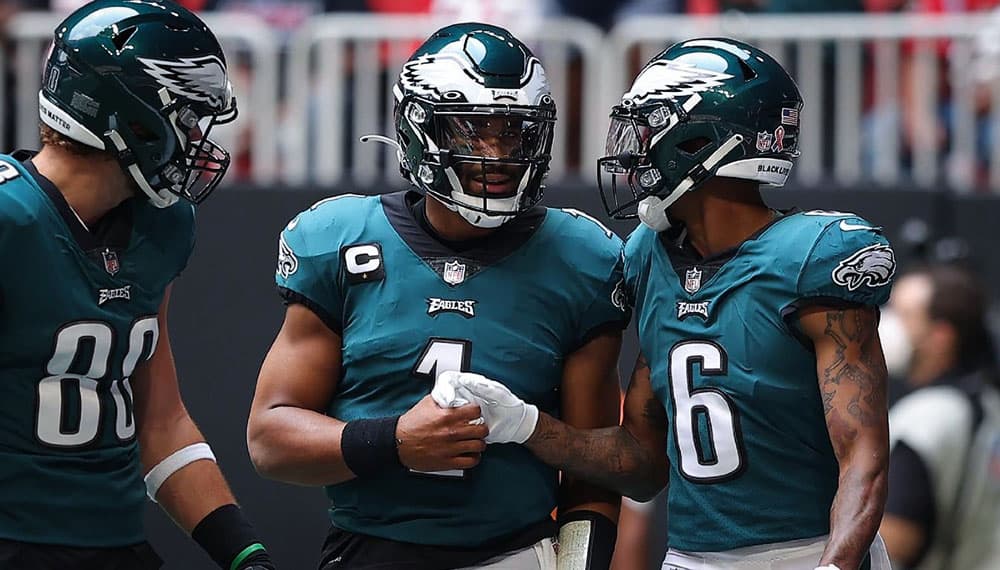 Let’s walk through strategy and lineup selection for the $5 entry Week 8 $1.8M FanDuel Sunday Million. Whether you are a single lineup player, new to daily fantasy, or max entering and looking for an extra edge, the stacks and players suggested below could be the key to unlocking the $300,000 prize.

The most important thing to remember in a top-heavy payout contest this size (428,571 entries) is that you need to balance the goals of trying to select a lineup that optimizes points while also minimizing ownership, as each player you use becomes less valuable to you the more they appear in competing lineups.

For those that missed it, we've already covered our favorite plays for the Week 8 DraftKings Millionaire Maker as well and will publish picks for PrizePicks and Underdog Pick'em contests before Sunday's kickoff.

This is an excellent time to stack Dallas Goedert with Jalen Hurts after Goedert failed to live up to the hype last week in his first game without Zach Ertz. Most DFS players were expecting more than 3 catches for 70 yards and a 2-point conversion, and that should translate into lower ownership this week despite an outstanding matchup on the road against the nonexistent Lions defense. Nothing has changed about the opportunity for Goedert since Ertz left.

Hurts is the 2nd most expensive QB on FanDuel but only the 5th priciest on DraftKings. This will further limit ownership for Eagles stacks on FanDuel as people prioritize relative pricing, creating an opportunity for you to do the opposite. The upside continues to be enormous for Hurts as he remains 2nd for QBs in rushing yards with 361 and tied for first with 5 rushing touchdowns.

Taylor Heinicke rushed for 95 yards in Week 7 and is now 4th in the NFL for QB rushing yards. That might be 3rd if he had played a full Week 1 as he only trails Daniel Jones by 7 yards. If he continues to run at this pace, he’s a very compelling contrarian play on a slate that is missing Patrick Mahomes, Kyler Murray, and Lamar Jackson. There’s more upside than meets the eye here because of Heinicke’s running ability, and creativity can produce outstanding results on slates that are missing so many stars.

McLaurin is an easy pair with Heinicke, as he continues to lead Washington in everything receiving. He’s also 5th in the NFL in total targets with 69. The Broncos do present a difficult matchup for Heinicke and McLaurin, but their significant combined upside is worth considering here at extremely minimal ownership on a slate with limited dominant options.

In two games with Geno Smith as the Seahawks starting QB, DK Metcalf is averaging 4 catches for 77 yards and 0.5 touchdowns. Those aren’t exactly the kind of booming numbers DFS players have in mind when they decide to pay up for a WR. But even without Russell Wilson, Metcalf remains one of the most dominant receivers in the NFL, and he gets an outstanding matchup at home against the horrendous Jaguars in Week 8.

With more attention being given to recent high-performing WRs like Cooper Kupp, Ja’Marr Chase, and Deebo Samuel, Metcalf will likely be overlooked at a cheaper salary. That creates an opportunity to leverage recency bias and play Metcalf at a uniquely low level of interest in an outstanding matchup.

The 2021 season has been a disaster for Allen Robinson and the entire Bears offense so far. The same can likely be said for your fantasy team if you drafted him. But this is still the same WR that was considered elite just two months ago at the start of the season.

It’s difficult to project what will happen for the Bears at QB throughout the course of any single game at this point, but it’s also difficult to see things getting any worse for Robinson.

He will be Chicago’s top option in the passing game, and the moment that they figure anything out offensively, Robinson is likely to see a quick increase in production. San Francisco isn’t a great matchup here, but the Bears are at home in Week 8. Ultimately, this price is just too low for a player this talented with such a big offensive role and at low ownership.