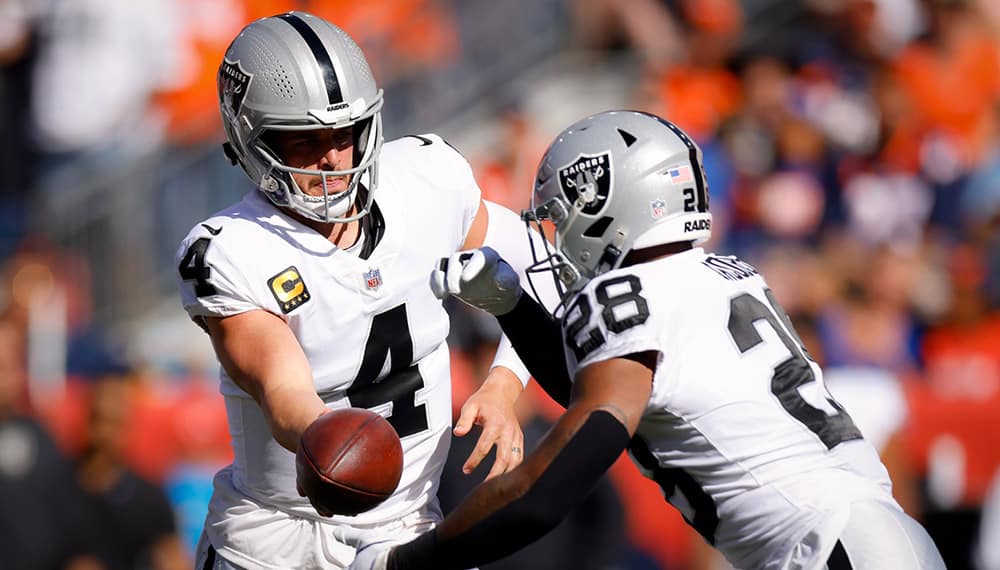 If you’re looking for a weekly fantasy football contest with a cheap entry fee and huge prize money, you can’t go wrong with the FanDuel Sunday Million. Their NFL Week 7 Sunday Million entry fee is only $5 and first place is awarded $300,000!

Here are some of our favorite plays at each position to sprinkle into your week 7 lineups. Don't forget to check out our DraftKings Week 7 picks as well and consider hedging your picks with some Pick'em prop contests at a site like Underdog Fantasy as well.

After an awful Week 1 performance, Aaron Rodgers has returned to last year’s MVP form. The former Cal star is spreading the ball around nicely to Adams, Cobb, and Lazard. We think Mr. Discount Double Check will pick apart this inept Washington secondary.

Rodgers is averaging over 239 passing yards per game and he should do much better than that against a Washington secondary that is allowing 309.5 passing yards per game (dead last in the NFL). Rodgers has thrown at least two TD passes in five straight games and we see that trend continuing as well this week. This will be a huge day for Rodgers and the Pack at home.

Conner has been a pleasant surprise for this Cardinals offense in 2021. The former Pittsburgh Steeler has already scored 5 TDs this season and should find the end zone at least once on Sunday against this pitiful Houston Texans defense. Though Conner often splits carriers with Chase Edmunds, Edmunds is struggling with an injured shoulder and is listed as questionable.

This should mean more carries for Conner, which is a big reason why we picked him this week. The Texans give up 4.7 yards per rush which is 28th in the league. They’re also surrendering 141.3 rushing yards per contest, which ranks 31st. All of this leads us to think that Conner may crack the 100-yard mark for the first time this season.

Jacobs is gradually looking healthier each week after dealing with some injuries earlier this season. The former Alabama standout has gotten 31 carriers over the past two games so they are increasing his workload. We think Jacobs could be due for a breakout game against this Eagles defense that allows 135.3 rushing yards per game (28th).

Jacobs has yet to break 100-yards in a game this season but he has found the end zone four times. One thing we love about Jacobs is his ability to catch the ball out of the backfield. Derek Carr loves to throw little swing passes to get Jacobs out in space.

The Raiders look to be playing better now that Jon Gruden is out of town! This is a great spot to put Jacobs on your roster.

Jefferson has been a non-factor the past couple of games for the Rams as he’s only been targeted four times in each of those games by Matt Stafford. This is a great opportunity to buy low on Jefferson, who is just as talented as his teammates Cooper Kupp and Robert Woods.

What better time to pick up Jefferson than against a Lions secondary that is allowing 9.2 yards per pass (last in the league)? Stafford should be looking to hook up with Jefferson on several deep balls this week. This is a great price on such a big-play threat!

Speaking of big-play ability, did you see the 75-yard TD pass that Bourne hauled in against the Cowboys last week? This guy has some serious speed and he can stretch a defense! We think Bourne could have a great game against the Jets this week, especially since rookie QB Mac Jones is looking more comfortable.

The Jets have a surprisingly good rush defense so Josh McDaniels may have to ask Jones to throw the ball more often. This should lead to more targets for Bourne since the Pats will try to soften up the Jets’ defense. Kind of like Van Jefferson, Bourne is a value pick at a cheap price.

Since father time does not affect Tom Brady at all, it’s a great idea to add a Bucs receiver to your roster each week. We think Godwin has a big game this week, even against a pretty stout Bears’ defense. Antonio Brown is banged up with a hurt ankle so Godwin could be a focal point of the offense for the Bucs in this game.

Godwin is due for a breakout game, as he hasn’t eclipsed the 100-yard receiving mark since Week 1 against Dallas. Tampa hasn’t had much success running the football so expect lots of throws from Brady in this one. This could be a massive game for Godwin!

The Eagles have a pretty stout pass defense but let’s not forget that Waller is a matchup nightmare for every team. Waller’s 6-6 255 pound frame is almost impossible for any secondary to defend. What’s surprising to us is that Waller has only scored two TDs so far this year!

Waller has been fairly quiet since his huge Week 1 game against the Ravens on Monday Night Football. Even though he’s gotten fewer targets lately, you can usually pencil Waller in for at least 5 catches and 50 yards or so. We’re hoping that Carr will try to get the ball to Waller more this week.

We’re taking a flyer on Hollywood Brown for our Flex position pick this week. Brown is having a fabulous season and has already scored 5 TDs. Lamar Jackson has matured as an NFL passer and that’s a big reason why we love Brown in this spot.

The Bengals defense has been surprisingly improved this season so that is a cause of concern for us here. However, Cincy’s strength of schedule ranks 25th in the NFL so their defensive numbers are probably a bit inflated. We expect Brown to stay hot and grab a couple of deep passes this week.

We love getting this aggressive Patriots defense against a rookie QB who still looks very unsteady in the pocket. Poor Zach Wilson has already thrown 9 INTs this season and this Pats defense ranks 10th in the league in takeaways.

The Pats held the Jets to only six points in Week 2 and they forced 4 turnovers in that game. There’s no reason to think this week will be any different! Love getting Belichick’s defense off of a frustrating loss!