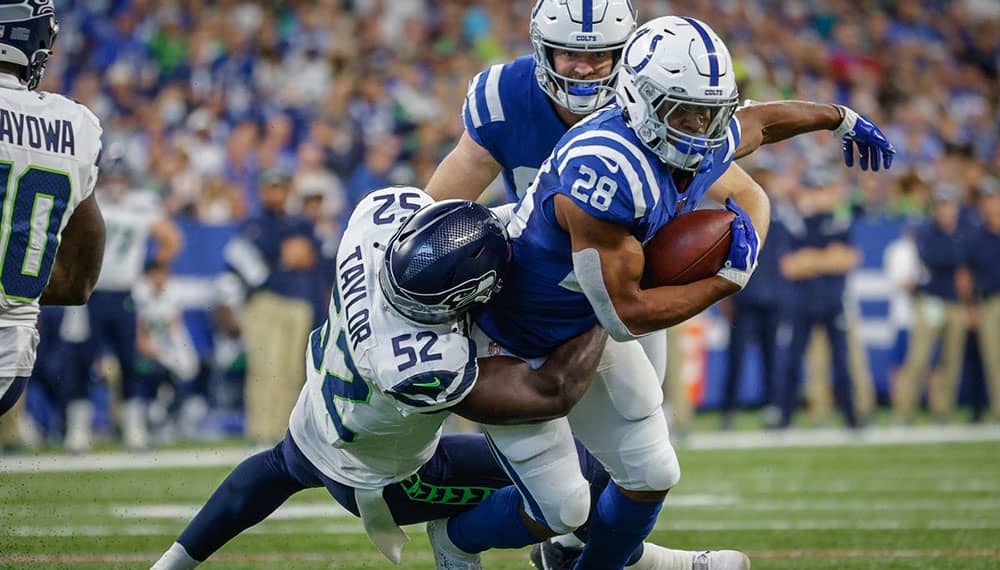 This article will walk you through strategy and lineup selection for the $5 entry Week 4 $2.75M FanDuel Sunday Million. Whether you are a single lineup player new to daily fantasy or max entering and looking for an extra edge, the stacks and players suggested below could be the key to unlocking the million-dollar prize.

The most important thing to remember in a top-heavy payout contest this size (654,761 entries) is that you need to balance the goals of trying to select a lineup that optimizes points while also minimizing ownership, as each player you use becomes less valuable to you the more they appear in competing lineups. Therefore, the ideal DFS selection is one that carries a high upside yet is being overlooked in the short term for some reason.

If you registered using the FanDuel bonus offer this season, you likely have free entries to this contest through the end of the 2021 season. Be sure to review each week's results to see what worked for the winners, where the money line was, and how you can improve your lineup strategy.

Get up to $55 to Try Player Prop Contests at Betcha

If you love player props and fantasy football, Betcha is the app for you! Stack player prop over/under picks for single stats or total fantasy score, and win up to 20x your entry. Use the promo code EWB to receive a $50 deposit bonus and $5 free entry for NFL Week 4!

Nearly every DFS player that clicks on Matthew Stafford’s name in Week 4 will follow that by selecting Cooper Kupp at WR. That gives you a unique competitive advantage because Robert Woods is about 25% cheaper at significantly lower ownership despite being a very similar player. Kupp does appear to be Stafford’s preferred target, but small sample sizes can be significantly misleading.

Additionally, I anticipate that the Cardinals' defense will fixate heavily on stopping Kupp now that he’s scored 5 TD’s in 3 weeks. If that creates an opportunity for Woods in what should be a high-scoring game, this connection could deliver and allow you to hop over the field.

Guess who’s third in the NFL for QB’s in rushing yards? Daniel Jones isn’t exactly having a successful season so far, but he’s run for 161 yards through 3 weeks, fewer only than Lamar Jackson’s 251 and Jalen Hurts’ 179. This means upside, and even though the matchup on the road against the Saints isn’t the greatest, this stack is appealing.

Golladay is one season removed from being considered an elite WR, and with Sterling Shepard and Darius Slayton banged up plus Evan Engram on vacation he basically has no competition for targets. With a hilarious defense, the Giants will have to throw to remain in this game so it’s a guarantee that Golladay will get usage.

At this dirt cheap price, Jones and Golladay don’t even have to be the top scorers to pay off because they afford you so much lineup flexibility elsewhere. Even if the Giants are bad in this game, Jones could run and fixate on Golladay enough such that the stack might score well. This is a fantastic, cheap stack that will be largely ignored in Week 4.

I expect most players paying up for an expensive Chiefs pass-catcher to focus on Travis Kelce against Philadelphia’s shaky secondary. His worst game of the season so far was in Week 3, with 7 catches and 104 yards receiving, and no TD’s. Which actually is pretty bad for Kelce. In contrast, Hill has only caught 8 catches for 70 yards without a TD over the past 2 games combined, not to mention that he also fumbled in Week 3.

That’s not great, and DFS players spending up at WR won’t like it. I really don’t care, as 2 games are meaningless compared to the overall incredible track record Hill has compiled throughout his career. Let’s not forget, he had 11 catches for 197 yards and a TD in Week 1.

Hill makes for a great pivot away from Kelce for the same price at $8200 or other top WR’s such as Cooper Kupp for $8600 at home against the Cardinals or Davante Adams for $8100 at home against the Steelers. There aren’t many chances to get Hill coming off 2 bad games in a row, so take this one.

Although Nyheim Hines has successfully frustrated anybody who has Jonathan Taylor on their fantasy team so far this season, I think Taylor will be just fine. Not only has his price now been heavily discounted, the Dolphins are also a great matchup this week.

Part of the problem for Taylor has been that the Colts have been losing a lot and forced to abandon the run. His worst game was against the Rams which is about as tough a matchup as it gets, and playing the Seahawks is not an ideal set up for a run-heavy script.

I anticipate Indianapolis will lean much more heavily on the run against Miami in Week 4. With everybody officially concerned about Taylor, now is the perfect time to play him.

There are no holdovers from our NFL Week 4 DraftKings Millionaire Maker picks, so be sure to check out that article as well.