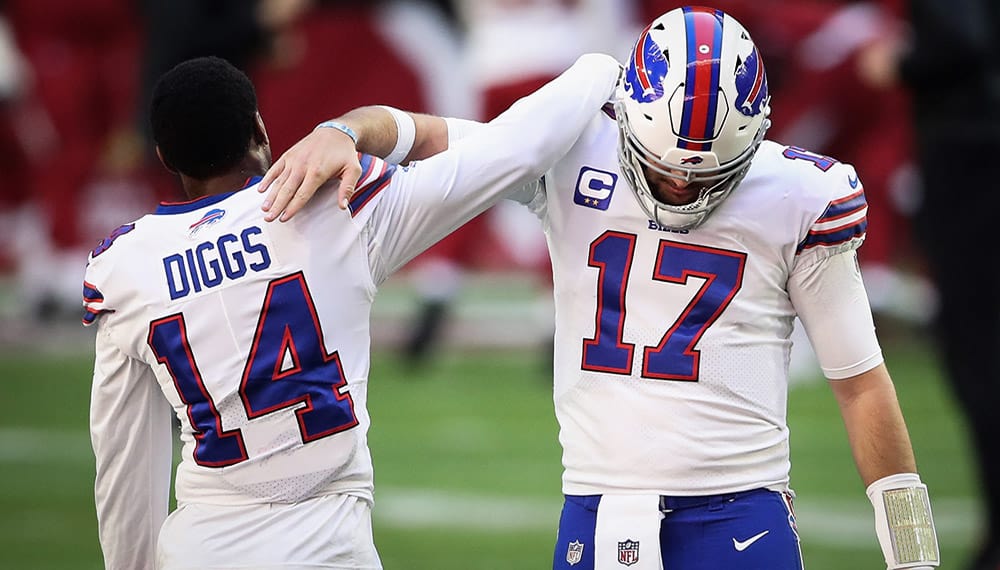 While we have never been big fans of these single-game contests, the DraftKings Showdown format, which applies a 50% salary penalty to the captain spot is certainly better than FanDuel's format which feels more like a lottery ticket than a fantasy contest.

That being said, the SuperDraft multiplier works well in these single-game contests. Is Derrick Henry vs the Bills with a 1x multiplier a better play than Zack Moss vs the Titans with a 2x multiplier? The multiplier brings a much larger player pool into roster consideration, creating more variety between lineups.

For those interested in trying the SuperDraft format, you can enter the $20 contest for Monday free with the promo code EWB.

Back to this DraftKings Showdown contest, I think the best way to break down this matchup is to take a look at each team's passing and rushing attack to decide where to focus our salary spend.

When trying to establish a game script for this Monday night game, it's hard not to feel like Buffalo throws its way to a big lead against the Titans. This Tennessee pass defense is arguably the league's worst. They are allowing an opponent QB rating of 100.3 despite their first five games including matchups against the Jets, Jaguars, and home against the Colts with Wentz playing through two sprained ankles.

Coming off his season-high snap share, Zack Moss will likely be a DFS favorite tonight, but it is important to point out that the touch total last week was 7-6 in favor of Moss before the pick-six that put Buffalo up 31-13 and officially into drain the clock mode. However, assuming Buffalo jumps out to a big lead early, Moss could once again be busy in the second half of this game. Tennessee has allowed 4.7 YPC over their last three, including 6.2 YPC to the Jaguars last week.

Buffalo has, by far, the league's best pass defense so far this season, and that seems to have been validated by holding Patrick Mahomes to a 70.9 QB rating last week. That being said, the Bills' numbers are inflated thanks to matchups with Big Ben (worst starting QB in the NFL right now), Jacoby Brissett in his first start, Taylor Heinicke in his second start, and Davis Mills in his second start. Nevertheless, with Julio in his first game back from a hamstring and AJ Brown sick and on a snap count, Tannehill seems unlikely to repeat the 30 point performance he had in Buffalo last season.

This is the big question mark for those building DraftKings lineups tonight. Can the Titans stick to the ground game if Josh Allen is lighting up their defense? Henry has been on a tear the past month, but his season-low carries and yardage numbers came against Arizona in week one, a game in which the Titans trailed big early. If you pay up for Henry tonight, a 10 point performance like he had in week one will kill any chance you have of cashing.

Our Lineup for the DraftKing Week 6 Monday Night Showdown

Here is how we constructed our optimal lineup for this contest, but we do want to point out that these Showdown GPP's are true dart throws and our recommendation for tonight is to focus on single entry contests.

Josh Allen is locked in at captain for us. We think he has a 40-point ceiling in this road matchup, which means a 20-point bonus if you plug him in as your captain. The downside here is obvious, at $19,200 in the captain spot, Allen eats up nearly 40% of your total salary. That being said, are you going to move him to a flex spot and lose the 50% bonus to squeeze Julio Jones into your lineup? Probably not worth it.

Like Allen, Diggs was a lock for us. The Titans give up more DraftKings PPG to opposing WR's than any defense in the NFL and will be without their top corner tonight. Despite a disappointing start, Diggs blows away the rest of the Bills receiving group in every indicator you would use to determine upside in this matchup.

Again, we can not make an argument for Julio Jones or AJ Brown given their health concerns and lack of production this season. Rather than play one or both of them, we will pay up for Tannehill, lock in points for all of the Titans' passing production, and pay for it at the back end of our roster.

There is no denying the Bills defense has benefited from a favorable schedule, but they should be fine to use again in this matchup. Tannehill has thrown three interceptions in the Titans' two home games and has been sacked more frequently than any QB in the NFL.

Bass has averaged 13 DraftKings PPG over the Bills last three and is easily the safest play under $4,000 for owners looking to go top-heavy in tonight's Showdown slate. Bass has yet to make a field goal of over 50 yards this season but has missed only one kick through five weeks. We think he has an 8 point floor, but flashed 16-point upside just two weeks ago.

No defense in the league is better on first and second down than the Bills, and McNichols has an 80%+ snap count for the Titans on third downs. Keep an eye on his status, but assuming he is able to play, he is definitely worth a dart shot in this matchup. If the Titans are playing from behind or in a lot of third and long situations McNichols will be on the field a lot, and given how sticky the Bills corners are, it could be check down city for Tannehill.

If McNichols is inactive, we would likely start Bullock and hope some Titans drives stall out in that 40-49 yard field goal range.