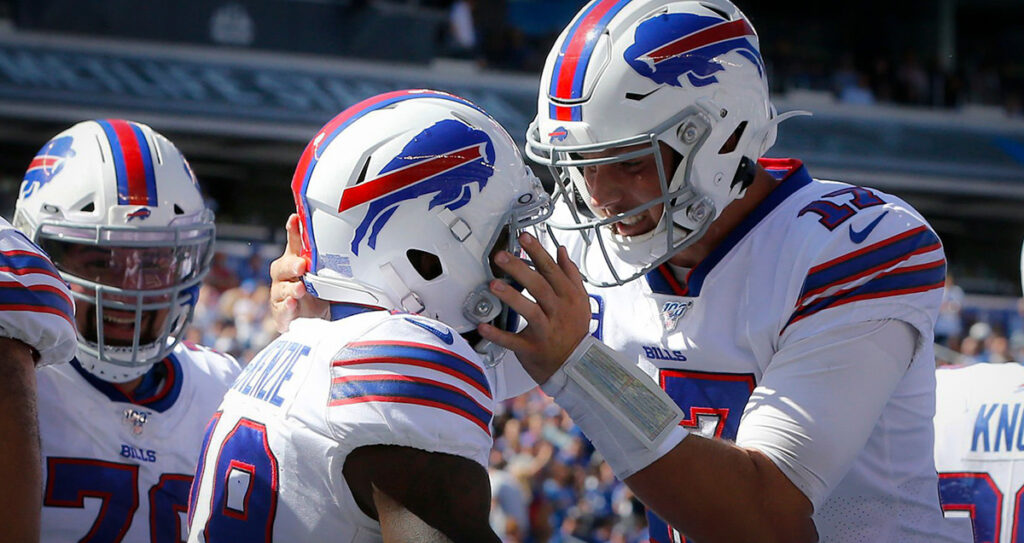 Stefon Diggs or Gabriel Davis? Give us Isaiah McKenzie for the DraftKings Thursday Night Showdown.

The 2022 NFL season kicks off on Thursday Night with the Super Bowl Champion Rams hosting the Buffalo Bills. DraftKings is celebrating the start of a new season with a Millionaire Showdown contest with a $1 million top prize and $3 million+ in total prizes.

At the time of publishing this article, the DraftKings Kickoff Millionaire contest is less than 3 days away and less than 20% full. Meaning we could kick off the 2022 NFL Season with some significant overlay. In this article, we will break down our optimal lineup for the contest and the thought process behind those picks.

DraftKings currently has Buffalo listed as a 2.5-point favorite on Thursday night, with the total at 52.5 (second-highest total for the week). Looking back at last season's Showdown results, wide receivers were typically the position to target at the captain spot in games with totals over 50 points. Winning lineups that had a WR at captain spent $8,100 on average at the position.

As we mentioned in the intro, value WR has historically been the winning Captain play for high-total Showdown contests, and Isaiah McKenzie jumps off as the obvious player to target here. Cole Beasley caught 82 passes on 112 targets working out of the slot for the Bills last season, and McKenzie is a considerably more explosive player. If he gets anywhere near the same volume, he should be in line for a monster fantasy season in 2022.

Looking at the matchup, McKenzie will line up against Troy Hill, who was terrible in Cleveland last season. So bad in fact, that the Browns were willing to give him back to the Rams for a 5th round draft pick. With Jalen Ramsay and David Long on the outside, McKenzie could be the Bills' best option on Thursday. Starting McKenzie at the Captain spot frees up cap space for us to fill out our roster with studs in this top-heavy matchup.

With Tre'Davious White starting the season on the PUP list, Cooper Kupp will undoubtedly see a ton of double-teams on Thursday night. However, that's not unlike what he saw when he put up a triple crown season last year. We aren't starting our year out by fading a WR that put up 20+ points in 17 of 21 games last season and went for 25+ 13 times. Kupp and Robinson should see a ton of targets this week with Van Jefferson out, and, even in a tough matchup, we expect both players to reach value here.

Speaking of players that were consistently dominant in 2021, Josh Allen finished the season as QB1, averaging nearly 28 DraftKings PPG. He was even better on the road, averaging over 30 points per game (25 PPG at home), and his best fantasy performances came in the Bills' toughest matchups. Allen also has one of the highest ceilings in the NFL. He topped 40 points four times last season, while being held to under 20 DraftKings points on just five occasions.

Clearly, Stafford gives you a lower ceiling than Allen. He topped 30 DraftKings points on just three occasions last season but was consistently in the 20-25 points range. That consistency is attractive in this matchup because we have elected to fade both Stefon Diggs and Gabriel Davis with this lineup. If the Bills spread the ball around, lineups paying $9,000 for Diggs or $7,200 for Davis are going to have a hard time finishing in the money. Locking in 25 fantasy points for Stafford's $10,800 salary is the right play for this lineup.

We love the fit of Allen Robinson in this Rams offense and expect to see fireworks right away. There is a reason the Rams were willing give him $15.5 million per year this offseason. Stafford isn't a QB that needs big windows to throw in, and Robinson's ability to consistently make contested catches will give Stafford and McVay confidence to target him early and often on Thursday.

We see the Rams' backfield as a 60/40 split in favor of Akers heading into the season opener, however, it's Henderson's low salary and upside as a pass catcher that makes him our favorite RB play for this Showdown slate. Even if he is working as the passing-down back with an occasional series spelling Akers, we would not be surprised to see Henderson finish with 80 total yards and 4-5 receptions here, especially if the total does top 50 points.