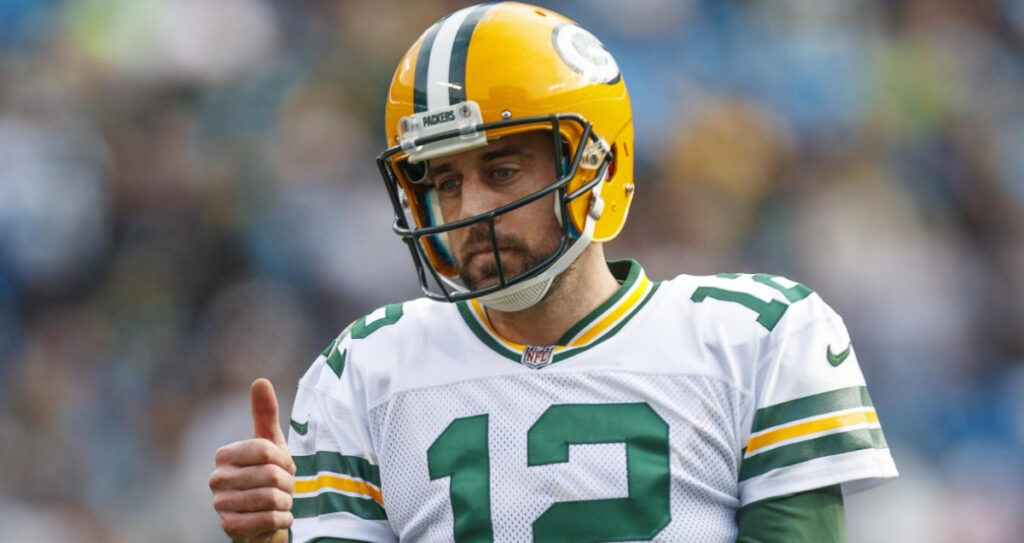 We think Aaron Rodgers and the Packers offense finally has a big week against a brutal Lions secondary.

Week 8 in the NFL was a fantastic week from a fantasy football/DFS standpoint. In fact, 34 players eclipsed 20 PPR points last week.

Will this onslaught of scoring continue in Week 9? We’ll soon see. Let’s look at our picks for the Week 9 DraftKings Millionaire contest and try to build off our success from last week.

Aaron Rodgers has not had a fantastic fantasy performance on the year. He’s looked like a shell of himself through 8 weeks. This is exactly why we’re recommending plugging Rodgers into your lineup this week.

If Rodgers was ever due for a ‘get right’ game, it would be this week against the Lions. Surely the Packers can’t lose 5 games in a row… Right?

Travis Etienne is on fire. He’s averaging 25.55 PPR points in his last two contests, and we anticipate a similarly strong performance this week against the Raiders.

The Raiders are allowing 23.1 PPG to opposing running backs on the season, not to mention 7.2 catches per game to running backs as well. With these two statistics in mind, Etienne is a fantastic DFS player on the week, especially given his discounted rate of $6,300.

Kenneth Walker III has been performing extremely well in his rookie campaign. He had a huge, 31.7-point game in week 7 against the Chargers, followed by a decent performance in week 8 against the Giants with 12.2 points.

With the Cardinals' secondary being as injured as they are, if Walker is get through the initial holes, he should have a field day on Sunday.

Romeo Doubs is the leading target-getter for the Green Bay Packers this season. That is significant because it signals that Rodgers is beginning to place more and more trust in the rookie receiver.

We’re confident in Doubs to have a monster game against the Lions secondary, who is allowing 32.4 PPG to opposing wideouts. Similar to the analysis with Walker III, if Doubs can get good separation off the line, he’ll have no problems evading Lions' defensive backs, and scoring a touchdown or two.

Justin Jefferson. We love watching him play football. We had him in the lineup last week, and he had a dud performance, scoring just 15.8 points, which is uncharacteristic for him. However, look for a big bounce-back performance against the Commanders this week.

Garrett Wilson is turning into a boom-bust player. He can give you weeks with 30+ points, and he can also provide weeks with 6 points. However, there’s optimism that Wilson will have a great game for your DFS lineup this week.

The Bills, while a great defense, give up 25 PPG to opposing wide receivers. With Elijah Moore having his fair share of problems with Zach Wilson and co., look for Garrett Wilson to have a ‘boom’ week this week.

Another Green Bay Packer in the lineup? Absolutely. Robert Tonyan has been Aaron Rodgers's safety blanket on third down, especially when Randall Cobb is out of the lineup.

Tonyan has garnered 42 targets on the year, just behind Romeo Doubs’ total of 49. Look for Tonyan to rack up the receptions this week against the Lions.

With the news that Jonathan Taylor hasn’t been practicing this week, it’s a great idea to plug Deon Jackson into your lineup this week. In his relief of Taylor, Jackson has scored 28.1 and 13.1 points as the primary back.

If he does have that role again this week, Jackson is a must-play, even if he’s facing a staunch Patriots-run defense.

Is Sacksonville back? The Jaguars are only allowing 19.8 points to opposing teams on the season. Pair that with the fact that they’re facing off against a lousy Cardinals team this week, and Jacksonville is a fantastic value play for your DraftKings roster.