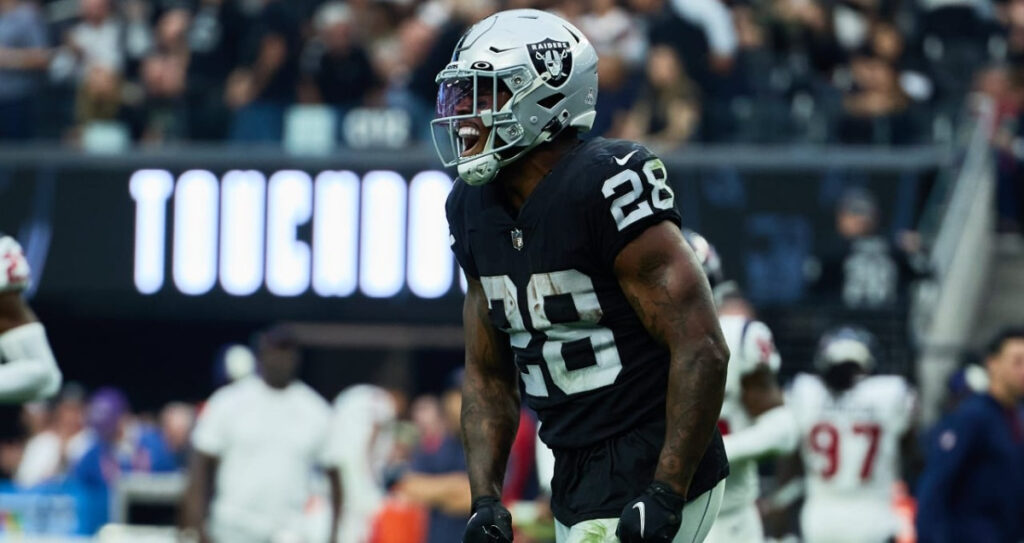 Josh Jacobs came up huge for us last week and we're making him a key piece of our DraftKings Millionaire lineup again in Week 8.

Week 7 in the NFL was certainly a whirlwind. The Packers lost their third-straight game, a feat that hasn’t happened in the Matt LaFleur era. The Giants are 6-1, and the Jets are 5-2... It’s truly a strange year in the NFL.

League parity seems to be working, as the juggernauts we’ve seen in the past few years have been struggling, with plenty of newcomers on top of their respective leagues/divisions. With all of that being said, let’s look at the best plays for this week’s DraftKings Millionaire contest!

Daniel Jones has certainly been silencing his haters all season long. He has led the Giants to their best record in years at 6-1. With a phenomenal game last week (31.78 points) against the Jaguars, look for Jones to have another big game this week against the Seahawks.

The Seahawks are giving up the 6th most points per game to opposing quarterbacks this year (21.9 PPG). With this in mind, Jones is a great addition to your DFS lineup this week, especially given his discounted cost of $5700.

Jamaal Williams is due for another big day at the office. After back-to-back duds (8.3 and 5.6 points, respectively), one might have cause for concern that Williams isn’t going to do well this week. However, he was facing up against Dallas and New England the past 2 weeks, who are top 10 defenses against the run.

This week, he faces the Dolphins' defense, who are allowing 19.3 fantasy points per game against running backs. If Swift is out again this week, Williams is a smash play against the Dolphins.

I recommended Josh Jacobs last week, so let’s run it back! Seriously. The guy has had 3 weeks of 33+ point games. No matter the cost, Jacobs needs to be in your DFS lineup until he proves otherwise. He’s on an absolute tear at the moment.

Parris Campbell is… healthy? For the first time in what feels like an eternity, Campbell looks like he is back to full strength. Boy is that needed! With the news that Matt Ryan will no longer be the Colts starting Quarterback, look for gun-slingin’ Sam Ehlinger to feed Campbell early and often this week.

The Colts are in desperate need of a spark, and with consecutive 18+ point performances, Campbell is the spark that your DFS lineup needs this week as well.

Chris Olave is just a fun player to watch. Whether he makes his way into your DFS lineup this week or not, Olave makes the Saints games worth watching. He is averaging 16.8 points per game, and with Jameis on the horizon, look for Olave to have a monster game this week against the Raiders.

Justin Jefferson is HIM. After a week off due to the bye, Jefferson is going to be demanding the rock. Although he’s the second-highest receiver on this slate, this price is well worth it.

The Cardinals are allowing 156+ yards per game to opposing wide receivers, paving the way for Jefferson to have yet another monster week.

Gesicki has been very up and down this season, similar to all tight ends not named Travis Kelce or Mark Andrews. However, there’s reason to believe that he’s in for a great week against the Detroit Lions.

The Lions have given up 13 points per game to tight ends this season, the 5th worst mark in the league. Look for Gesicki and his heavily discounted to bounce back this week against the Lions.

3 Giants in the same line-up? Are you crazy?? We might be. However, Slayton had a fantastic week 7, and stacking him with Daniel Jones is going to be a lethal combination this week.

The Seahawks allow 23.3 fantasy points per game to opposing wide receivers. Being that Slayton is Jones’ favorite target at the moment, we recommend the Jones-Slayton stack this week.

The Giants are playing some inspired football at the moment. As previously mentioned, they are 6-1 this season.

They are also giving up a mere 18.6 points to opposing teams this season, the 6th best mark in the league. Look for the Giants' defense to give Geno Smith and Co. a run for their money this week.