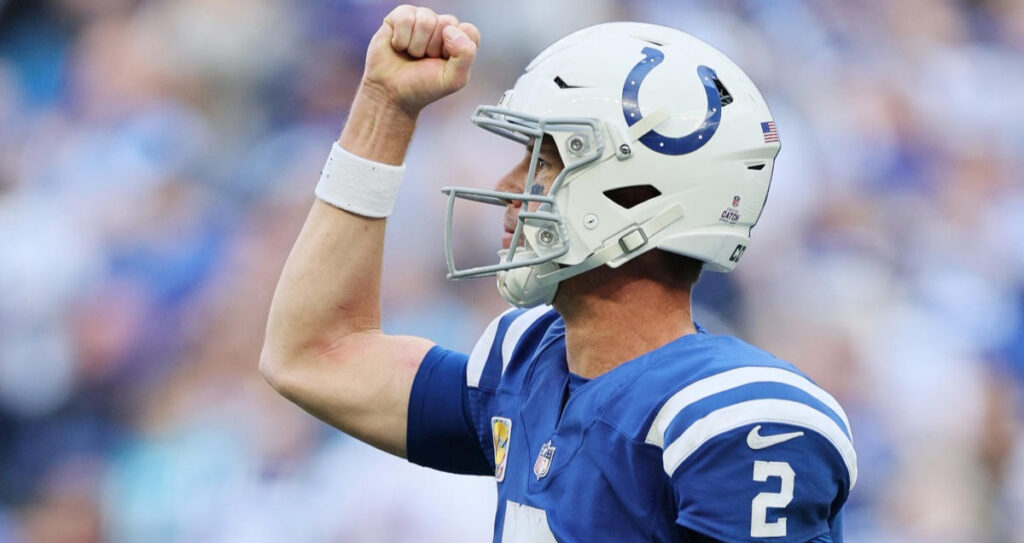 We are banking on a big day from Matt Ryan against a suspect Titans secondary.

If you’re a season-long fantasy football player, this is a terrible week for you. The Bills, Vikings, Eagles, and Rams are all on bye this week.

In daily fantasy, many of the players that we rely on to score a plethora of points (Josh Allen, Jalen Hurts, Justin Jefferson, to name a few) are on bye this week. Let’s take a look at who’s left, and try to win some cash together in the DraftKings Millionaire contest! If you want some extra DFS action this week, check out our DFS NFL Week 7 FanDuel lineup as well.

Matt Ryan has been putting together a sneakily solid year on the fantasy/DFS side of the ball. The Colts aren’t exactly the most well-oiled of machines, but Ryan is putting up some great numbers despite the teams' inequities.

This week, the Colts take on the Titans, who have been giving up 23.7 points per game. Look for Matt Ryan to go nuclear against a decimated Titans secondary this week.

Sometimes, you have to ride the hot hand. After scoring 22.1 fantasy points last week against the Packers, and averaging 18.2 points per game, Breece Hall is a must for your DFS lineup this week. He provides a very safe scoring floor and has the ‘boom’ upside that we’re all looking for as well.

Why doesn’t anyone talk about how good Josh Jacobs is? He’s had back-to-back 30+ point performances and looks for more of the same this week against the dismal Houston Texans.

Jacobs is a must-have in your DFS lineup this week. Look for Jacobs and Hall to be anchors for your DraftKings team this week.

Alec Pierce is the perfect player to pair with Matt Ryan this week against the Titans. His WR counterpart, Michael Pittman, has been drawing the opposing team’s best player, leaving Pierce more and more open each week. Look for Pierce to be targeted at a high rate against a subpar Titans defense, and hopefully, score a touchdown or three in the process.

Juju Smith Schuster is finally the receiver in Kansas City that we’ve been looking for. Mahomes hadn’t initially shown any trust in any pass catcher not named Travis Kelce, but that looks to no longer be the case.

Juju has been targeted 8 times in 3 of his past 4 games and scored 25.3 points last week against the Bills. Look for another big performance against the 49ers this week, a game projected to be high-scoring.

What else can be said about Ja’Maar Chase that hasn’t already been said? The guy is incredible.

After a few dud games to start the year, Chase had a gigantic game last week, scoring 35.2 points. Look for more of the same this week against a Falcons defense that continually gives up huge plays to receivers.

In sports, you absolutely hate to see players get hurt. However, with the absence of Randall Cobb in the Green Bay offense this week, I’m anticipating Tonyan to be targeted early, and often in this game.

Aaron Rodgers routinely leans on one player on third downs, and again, with Cobb out, this is a perfect time for Tonyan to shine.

After starting the season slowly, Brandon Aiyuk decided to quit messing around in week 6, putting up 28.3 points against the Falcons.

As previously mentioned when talking about Juju, the 49ers-Chiefs is shaping up to be a shootout. With this in mind, look for Aiyuk to get a bulk of the 49er's targets this week.

While the Packers have certainly had their share of offensive woes, their defense has looked good against mediocre Quarterbacks. This week, the Commanders are forced to start Taylor Heinicke, who hasn’t started a game since January 9th of 2022.

The Packers' defense should have a field day against the Commanders this week.