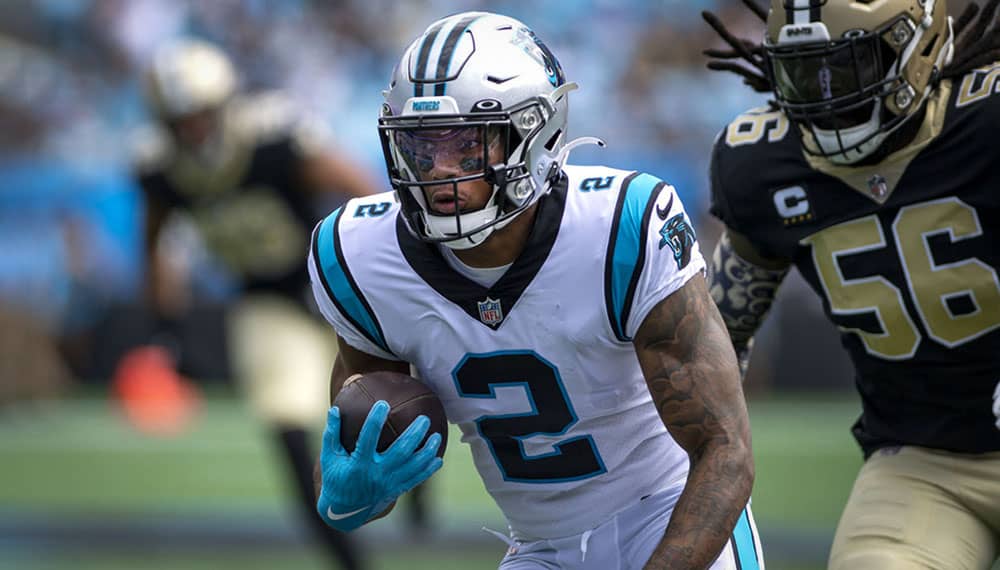 This article will walk you through strategy and lineup selection for the $20 entry Week 4 $4.25M DraftKings Millionaire Maker. Whether you are a single lineup player new to daily fantasy or max entering and looking for an extra edge, the stacks and players suggested below could be the key to unlocking the million-dollar prize.

The most important thing to remember in a top-heavy payout contest this size (251,238 entries) is that you need to balance the goals of trying to select a lineup that optimizes points while also minimizing ownership, as each player you use becomes less valuable to you the more they appear in competing lineups.

Therefore, the ideal DFS selection is one that carries a high upside yet is being overlooked in the short term for some reason. Let’s find a few for you to play this week.

If you love player props and college football, Betcha is the fantasy app for you! Stack player prop over/under picks and win up to 20x your entry. Use the promo code EWB to receive a $50 deposit bonus and $5 free entry today!

DFS players will shy away from stacking the Arizona Cardinals in Week 4 for two key reasons. Most importantly, Aaron Donald and the Rams are a nightmare for offenses. Kyler Murray will get some attention since he has been so incredible, but with options available in a similar price range and far better matchups such as Patrick Mahomes for $8100 at Philadelphia and Josh Allen for $8000 at home against the Texans, many will pivot away from Murray. This gives you a unique chance to play the top fantasy scoring QB in the NFL through Week 3 at potentially limited ownership.

Additionally, I expect DeAndre Hopkins to get very little attention after a 3-catch, 21-yard dud against the terrible Jaguars. Recency bias and a tough defense will combine here to allow you to grab Hopkins while many spend their salary elsewhere. The price of this stack will only serve to keep more of your competition away from playing it, but in what should be a high-scoring game despite the strength of the Rams defense, that could end up being very good news for you.

With everybody focused on Chuba Hubbard this week now that Christian McCaffrey is confirmed out, let’s find a different angle. McCaffrey’s absence will not help Carolina’s offense, but the good news is that they get to face a Dallas defense that was questionable at best coming into the season, and is now without DeMarcus Lawrence.

If Dallas can’t generate a pass rush, the McCaffrey-less Panthers may lean on the Sam Darnold-DJ Moore connection to catapult them to a fairly shocking 4-0 start. The Jets castaway is unlikely to be a favorite for many DFS players until showing a much more prolonged career turnaround, yet he’s really played quite well so far. Here’s your surprise statistic for the day: he’s tied with none other than Kyler Murray for the league lead in rushing TD’s for a QB with 3. If he continues punching in TD’s, his upside is pretty substantial.

Pairing him Moore is a no-brainer, as DJ has been his top target through the first 3 weeks averaging 7.3 catches and 95 yards per game on 10.3 targets. These two could really light up a weak Dallas defense and give you a huge advantage if Carolina throws more instead of running with Hubbard.

Consider me unconcerned about Nick Chubb’s subpar game against the Bears in Week 3. Those who question his ability to consistently produce while sharing the backfield with Kareem Hunt will seize on this game as an example because of Hunt’s big performance but I think that’s ridiculous.

Not only is Chubb averaging 5.46 yards per carry so far this season, but he also still received 22 carries against Chicago. It just wasn’t his day. Take advantage of this and get him at lower ownership against a wobbly Minnesota run defense. Other players spending up at RB will fixate on Derrick Henry for $8800 at the Jets or Alvin Kamara for $8400 at home against the Giants. Chubb has similar upside, is cheaper, and will get lower ownership.

The Rams do have pass catchers other than Cooper Kupp, and one of them is Tyler Higbee. With Gerald Everett gone, Higbee is getting all the TE snaps for the Rams’ high-powered passing offense. Although his overall numbers aren’t outstanding yet, he did catch a TD in Week 3 and should begin producing more consistently especially as defenses pay more attention to Kupp.

There should be plenty of opportunities for Higbee in Week 4 in a high-scoring game against the Cardinals, and you can grab him for slightly over half the price of Travis Kelce.

Aaron White graduated from Northwestern University with a B.A. in Economics. His industry experience includes projects for the Chicago Cubs, The Sporting News, and QL Gaming Group. He covers the NFL for EatWatchBet.