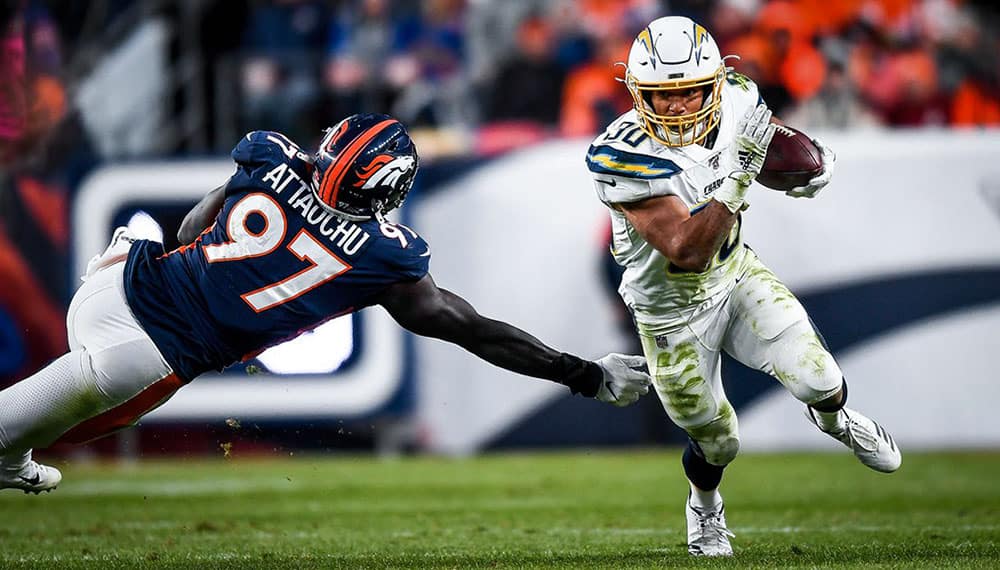 With no Thursday Night Football and no teams on bye, the DraftKings NFL Week 17 slate is set to be our largest of the season with a total of 14 games. This week's Millionaire contest features a $20 entry fee, $3 million in prizes, and, of course, a $1 million top prize.

COVID-19 continues to play a massive role in seemingly every game on the slate. There were another 96 positive tests on Monday, a new single-day high for the league. We will continue to monitor players added and removed to the list and adjust our picks for the Week 17 DraftKings main slate as news comes out. 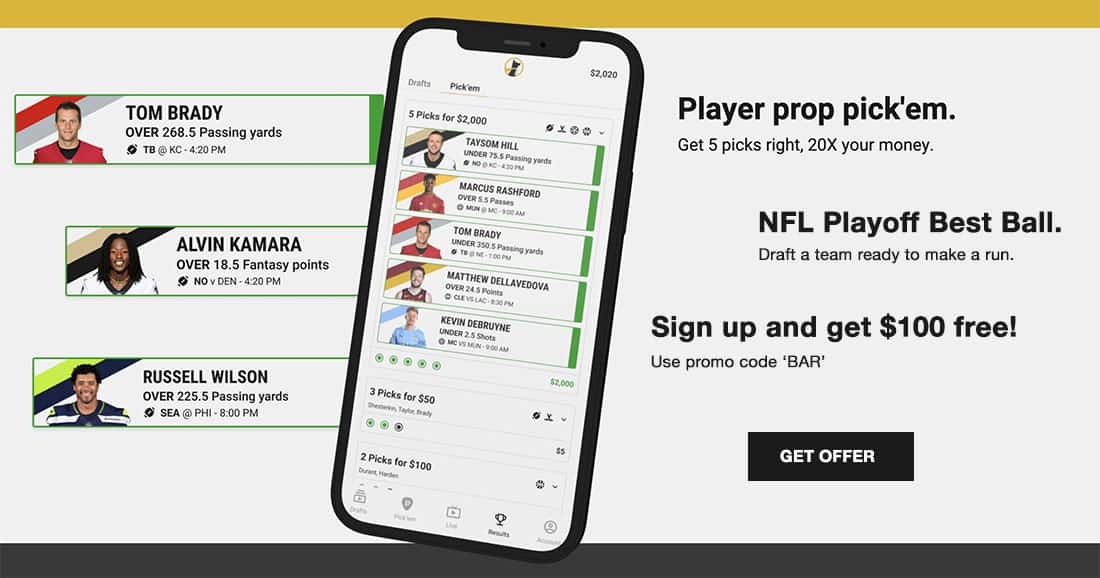 Jared Goff and the Lions are certainly playing inspired football despite a season pretty much gone. The Lions have won two of Goff’s last three starts and following his absence last week due to Covid-19, I would expect him to continue on his hot streak against the Seahawks.

Goff was stellar last time out against the Cardinals, connecting on 21 of 26 passes for 216 yards and three scores.

His newfound favorite target Amon-Ra St. Brown is open regularly and the duo should have plenty of opportunity against this Seahawk secondary.

Josh Allen has the Bills in a position to all but sew up the division with a pair of wins down the stretch and facing off against the 29th-ranked defense in the league should certainly allow for some big numbers.

Allen was stellar against the Patriots last week, throwing for 314 yards and 3 touchdowns while using his legs for another 64 yards.

With this essentially being a must-win game against an Atlanta team not scared to give up points, I’d expect to see Allen match or top his performance from a week ago.

DraftKings Running Back Picks for Week 17

The Washington workhorse in the backfield hasn’t produced a breakout game since Week 13, but he’s remained solid. Gibson continues to rack up touches and has found the end zone in three of four weeks.

Philadelphia comes in trying to secure a playoff berth but hasn’t been terribly sound against the run.

I would expect a heavy dose of Gibson on the ground, probably in the neighborhood of 12-16 carries in addition to a couple of targets out of the backfield.

That type of workload at a $5,900 price point is just too good to pass up.

Ekeler was out this past week on the Covid-19 reserve list but seems to be back and ready to roll this week against the Broncos.

He should be well-rested for the last two games of the season, which are desperately needed to keep the Chargers playoff hopes alive.

Prior to the missed game last week, Ekeler had accounted for eight-straight double-digit FPTS performances, topping 20+ in three of those.

In Week 12 against the Broncos defense, Ekeler picked up 31 yards on just 12 carries but torched Denver through the air with 68 yards and a touchdown on six receptions.

Being at home will certainly help this week and I would expect a similar performance this time around.

The Cardinals offense certainly hasn’t been as explosive with Deandre Hopkins sidelined, but Kirk seems to have taken over as Kyler Murray’s favorite target.

Over the last three weeks, Kirk has 11.6, 24.4, and 11.8 FPTS respectively. In the most recent pair of outing, he has topped nine targets, which is an excellent indicator of the workload he should expect against the Cowboys this week.

In what will likely turn into a shootout, look for Kirk to rack up some targets down the field and approach 15 FPTS this week.

At this point, I’m not sure there is a price point that wouldn’t make sense for Kupp. The Rams wideout has topped 20+ FPTS in four-consecutive weeks and 12 overall this season in what is shaping up to be one of the best receiving campaigns in NFL history.

Going up against the Ravens, who are 28th in the league against opposing receivers, should be an easy task for Kupp and Stafford.

Nothing crazy here, but get Kupp in your lineup if you can afford it. 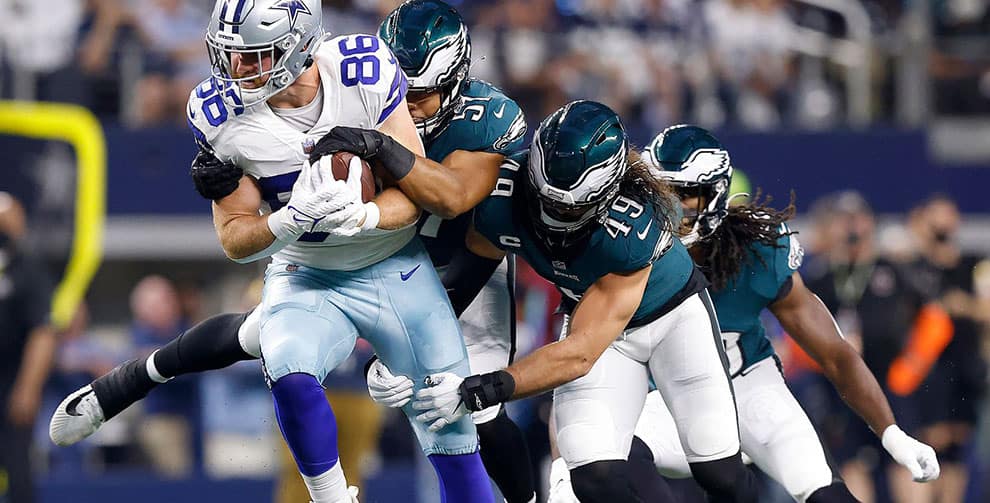 Schultz has been on fire in recent weeks, nabbing 16 receptions on 17 targets from quarterback Dak Prescott.

Schultz also has a pair of touchdowns in as many weeks and is becoming one of the more reliable options among many on this Cowboy offense.

As mentioned before, I would expect this game against the Cardinals to be a shootout and one that lends itself to some opportunities down the middle of the field for Schultz.

Similar to Kupp, Mark Andrews has been about as productive as you can get from the tight end position.

Andrews has accumulated games of 31.5, 38.6, and 29.5 FPTS over the last three weeks and at this point, it doesn’t really matter who is at quarterback for the Ravens.

The Patriots have put themselves in essentially a must-win game against the Jaguars and rookie quarterback Trevor Lawrence.

The Jags will also be without James Robinson this week and I love the Pats defense to handle them with relative ease.

My optimal NFL Week 17 lineup is much more balanced than my picks from previous weeks. With pricing a bit tighter this week, building out a roster with a stack of Josh Allen/Stefon Diggs or Matthew Stafford/Cooper Kupp is rough. This should mean scoring is a bit down despite the 14 game slate.

I'm rolling with the Lions stack of Goff and St. Brown... with Reynolds out this week, St. Brown should see a ton of targets for Detroit. Assuming the Lions trail early in Seattle, they could be forced to throw it a bunch against a bad Seahawks secondary.

The fact that Jones got most of the passing down work for the Bucs makes him a lock through the end of the season. While Vaughn did outperform him from a yards-per-carry standpoint, the majority of that production came on one play. Jones should find more running room this week against the Jets.

The story at wide receiver is targeting players with expanded roles thanks to injuries. AB, Kirk, and St. Brown have moved into the #1 WR role on their teams due to injuries to the players around them.