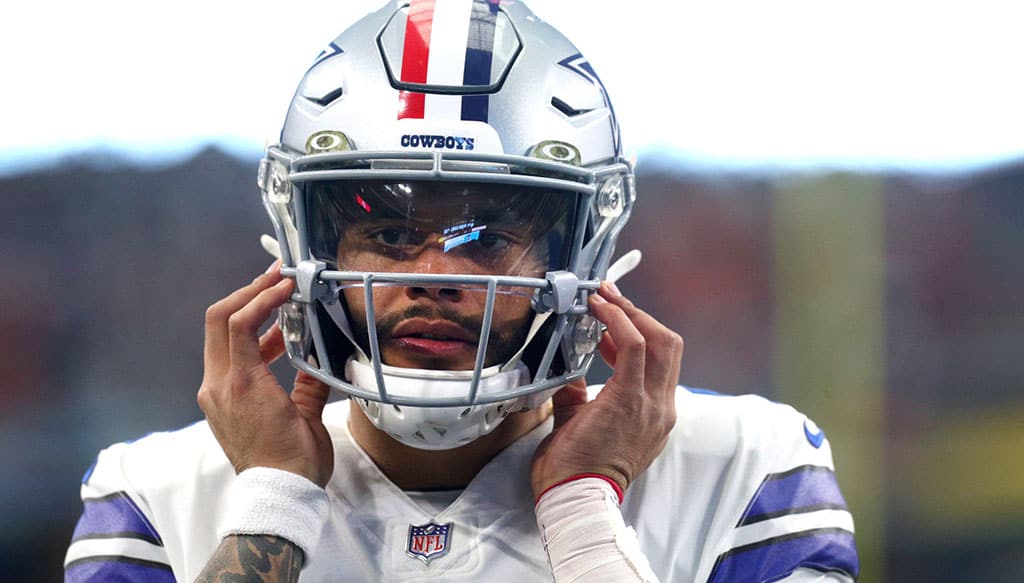 DraftKings has been a leader in the DFS industry for quite some time. If you need a fantasy football contest with a low entry fee and huge payouts, look no further than the DraftKings Millionaire Contest.

The top 46,000 entries receive cash prizes with the #1 spot taking home $1 million! If you are newer to DFS and need a little direction, feel free to use our Week 10 optimal lineup below as a basic guide.

However, make sure to do your research, as successful DFS players often find the best sleeper picks on their own. Remember to mix in plenty of cash games and to take advantage of the current DraftKings promo code offer if you don't already have an account.

We are betting that the Cowboys come out in a foul mood after laying an egg against the Broncos last Sunday. Prescott played a subpar game but did throw for 232 yards and 2 TDs. It was Prescott’s first game back since the calf injury so a lot of his lackluster performance was probably due to rust.

Ingram is our sleeper pick this week for several reasons. The former Heisman Trophy winner is thrilled to be back in New Orleans. We look for Ingram to get plenty of carries, especially since Alvin Kamara hasn’t practiced all week due to a banged-up knee.

The Titans’ rush defense is pretty decent as they only allow 100 rushing yards per game. However, after a deep dive into the numbers, Tennessee ranks 23rd in yards per rush allowed. Ingram has a bit of age on him but he still has enough juice to have a big game this weekend.

Swift hasn’t put up any eye-popping numbers yet this season but that could change this week against the Steelers. Pittsburgh allows 4.4 yards per rush so there should be some holes for Swift to run through this week.

The Lions’ offensive line should be well-rested coming off the bye week and we’re expecting a better effort after the embarrassing loss to the Eagles in Week 8. We see Swift putting up some nice numbers, both in the running game and the receiving game. The former Georgia star is an underrated pass catcher and we see him grabbing at least 5 receptions this week.

Who? (LOL) Johnson is another one of our sleeper picks this week. This is the perfect week to take a flyer on Johnson since both Chris Godwin and Antonio Brown are dealing with injuries and listed as questionable. Tom Brady proved for years in New England that it didn’t matter who was catching the passes.

We think Johnson could surprise some folks this weekend much as he did in Week 8 against the Saints by catching 5 passes. The former Minnesota Golden Gopher has yet to find the end zone this season but that could very well change on Sunday against a suspect Washington secondary.

Sean McDermott will have the Bills fired up for this game after dropping a head-scratcher to the Jaguars last week. We think the Bills will take out some serious frustration against a Jets defense that allows 274.9 passing yards per game.

Sanders hasn’t scored a touchdown in several weeks but this could be his breakout game. The former SMU star is usually targeted at least six to eight times per game so he should have plenty of opportunities for big plays. We see Sanders racking up at least 80 receiving yards and at least 1 TD.

Brown is never a cheap option at wideout but we think he is worth the extra money this week. The loss of Derrick Henry means that the Titans will pass the ball more than they normally would. That change in offensive strategy could pay big dividends for Brown, who has surprisingly only caught 3 TDs this season.

The Saints are the best team in the league against the rush so the Titans will have to go to the air to move the football. We see Ryan Tannehill hooking up with Brown on several deep passing plays. The Saints rank 27th in passing yards allowed per game so that bodes well for Brown this Sunday.

Howard is another sleep pick of ours this week. The former Alabama star has not been a focal point of the Bucs’ offense yet this season. However, that could change this week against a Washington secondary that ranks dead last in passing yards per game allowed.

We are banking that Howard has a performance that is similar to his Week 6 stat line against the Eagles (6 catches, 49 yards, 1 TD). If he can do that, it’ll be well worth the $2,700 bargain price.

The Dallas defense has improved quite a bit over last year’s group, but don’t be fooled. The ‘Boys still struggle against the pass. That’s bad news against Pitts, who is a wide receiver who happens to play tight end.

Pitts has had a couple of underwhelming performances since his two breakout games a few weeks ago. However, we think that Matt Ryan will look his way more often in this game. We see Pitts getting close to 100 yards and grabbing at least 1 TD against this subpar Cowboys secondary.

Ahh yes, we are going back to the Bills well this week. This unit ranks 1st in almost every defensive stat that matters. They should be playing with a bit of a chip on their shoulder after the loss to Jacksonville last week.

We think the Bills come out angry and end up forcing the Jets into a lot of turnovers. We can’t believe this Bills defense is this cheap! Best of luck with your lineup this week and don't forget to check out our week 10 player prop picks for some tips on taking down the Sportsbook this week!