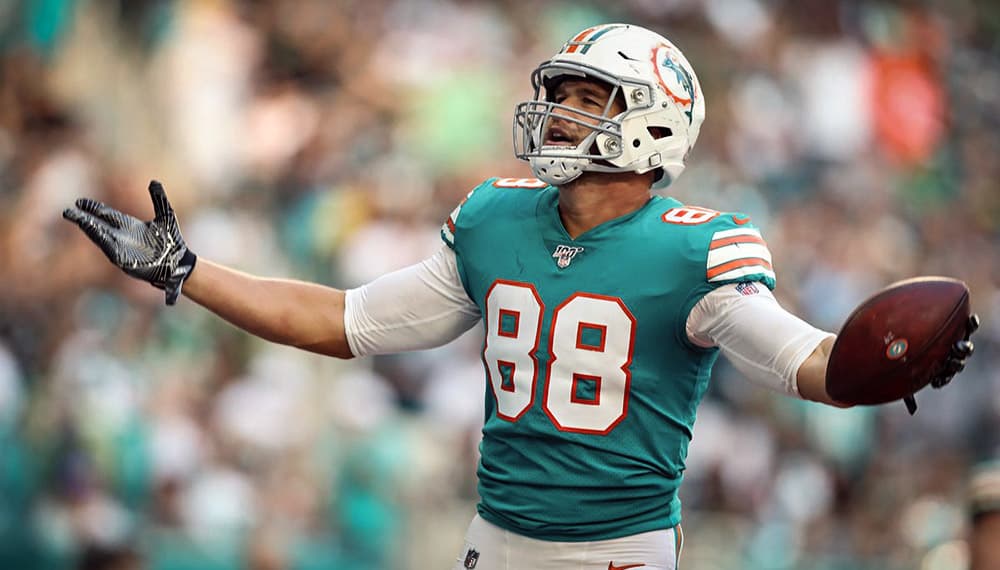 DraftKings already has yet another million-dollar top prize up for grabs in their lobby with the NFL Week 10 Thursday Night Football Showdown contest. This week's TNF matchup features the Ravens traveling to Miami as a seven point favorite.

We laid out our thoughts for this matchup in our best bets article, so we won't go too far into our projected game script, but to summarize, we think Baltimore jumps out in front early and the Dolphins passing attack puts up decent numbers playing catch up.

PointsBet is offering all new players an instant $100 bonus with a $1 bet on any sport. That means a $1 moneyline wager on the Ravens on Thursday would pay out $100+ guaranteed! Follow these steps to lock in your bonus:

With Sammy Watkins expected to make his return, Jackson will have a full arsenal of weapons at his disposal on Thursday night. Rather than try to predict which, if any, Ravens receiver has a high enough ceiling to start in this contest, we elected to simply pay up to put Jackson in the captain spot and fade all of his receivers.

Clearly, if one guy has a monster game it will take us out of the money, but Bateman starting to come on, both Brown and Andrews receiving a 25% target share, and Watkins returning, it's just too many mouths to feed from a fantasy perspective.

The Baltimore secondary has really struggled at times this season and Tua looked more than serviceable in the three games after returning from his first injury. Over that stretch, he averaged over 23 DraftKings PPG, with a floor of 16.2 points in a game against the Bills where he didn't throw for a touchdown. We will take that floor and lock in the points with Tua rather than gamble on Marquise Brown who is price $800 higher than the Dolphins' signal-caller.

Tua remains a game time decision, but we are starting either Dolphins QB and will just do a late swap if necessary once a final decision is made.

For those of you that already read our betting article, you will know we are fans of this matchup for Gesicki. With the Dolphins likely to be playing from behind early, Gesicki is the Dolphins pass catcher with the best matchup. Baltimore allows the second most fantasy PPG to opposing tight ends and Gesicki enters this week averaging 70 YPG over his last seven games, going over 16.7 DraftKings points in four of those seven starts.

Freeman has somehow managed to establish himself as the primary back for the Ravens. His 58% snap count last week was the highest of the season from a Baltimore running back. He has been relatively productive with the increased workload, scoring in three straight while averaging 13.5 DraftKings PPG over that stretch. Obviously we don't love how touchdown-dependent he has been, but he did receive 15 touches last week and has at least 2 targets in each of the Ravens' last four games.

We simply can't trust this Ravens defense enough to roster them, even in a matchup with a Dolphins' team that has turned the ball over plenty this season. Tucker has a considerably higher floor and ceiling this season, including 5 double-digit games in 8 starts and a 17 point performance against the Lions in week 3.

Who would have thought that Preston Williams would be a non-factor with both DeVante Parker and Will Fuller on IR, but that has been the case over the past few weeks. With Flores already stating Williams will be active on Thursday night, we are willing to roll the dice on him at $200 and hope that he finds a way onto the field. If the Ravens elect to have Marlon Humphrey shadow Jaylen Waddle, Williams could have a field day against Tavon Young and Anthony Averett.