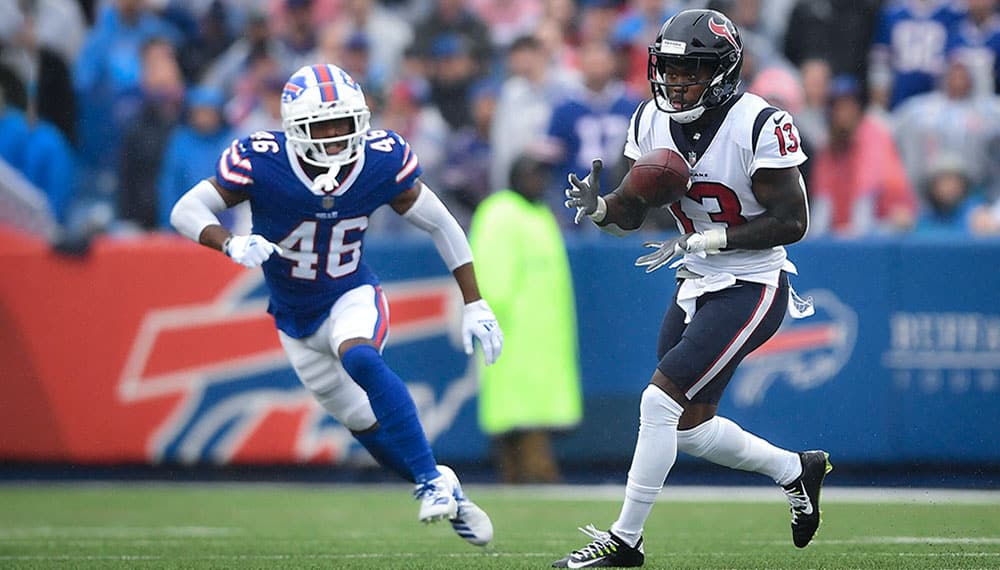 If you’re looking for a Fantasy Football contest with a low entry fee and high payouts, look into signing up for the DraftKings Fantasy Football Millionaire contest. The entry fee is only $20 and the winner takes home a million bucks!

If you are new to fantasy football, feel free to use our lineup as a guide for setting your lineup. However, do your own research to see if you can find that rare diamond in the rough player that is on very few rosters. That’s a hidden key to doing well in the DFS world.

Cousins should be a reliable QB option this week that is fairly inexpensive. The former Michigan State star is having a very good season so far and we expect that to continue against a putrid Baltimore Ravens secondary. Cousins has thrown 14 TDs and only 2 INTs this season.

He’s also averaging 279 yards per game through the air and that should bode well against the Ravens. Baltimore’s secondary is banged up and is allowing 296.1 yards per game passing. Cousins could very well eclipse 300 yards and possibly 3 or more TDs this Sunday.

Scott found the end zone a couple of times against the Lions last week and we think has a fair amount of value this week as well. Though he’ll have to split carries with Jordan Howard and Kenneth Gainwell, Scott was the starter last week and should be this week.

The Chargers rush defense has been flat-out terrible this season. They allow 159.6 rushing yards per game and 5.1 yards per rush. Both of those numbers rank dead last in the NFL so Scott could have a big day against the Chargers, much as he did against Detroit last week.

Gaskin hasn’t had a breakout game yet this season, mainly because the Dolphins offensive line has struggled with its run blocking. That could change against a Houston Texans team that is awful against the run.

The Texans allow 4.8 yards per rush (30th) and 148.1 rushing yards per game (30th). Gaskin should have more running room than he’s seen in quite some time in this game. Gaskin is also utilized quite frequently in the Dolphins passing attack, so that is a bonus for us here.

Cooks just keeps on producing, even in an anemic offense like the Texans. QB Tyrod Taylor comes back this week off his injured hamstring and that should mean more opportunities for Cooks in the long passing game.

Cooks has caught 51 passes for 585 yards and 2 TDs this season and we see him padding his stats against a Miami secondary that is surrendering 8.1 yards per pass (30th). Expect a big day from Cooks on Sunday!

We considered adding Stephon Diggs to our lineup this week but his salary of $7,700 was a little more than we wanted to pay. The next best option for us was Sanders, who surprisingly didn’t even catch a pass last week.

That should change in a big way against the Jacksonville Jaguars on Sunday. Sanders should be able to torch the Jags secondary for several big plays, especially if the defense decides to put too much emphasis on stopping Diggs. The Jags rank 31st in yards per pass allowed and 28th in passing yards allowed per game.

Sutton only caught 2 passes against Washington last week but we see him doing much better this week against the Cowboys. Although the Cowboys’ defense has improved, they still struggle with the deep ball at times. Trevon Diggs is also banged up with a sprained ankle so even if he plays, he won’t be 100%.

We see Teddy Bridgewater hooking up with Sutton on several deep passing plays to try and keep pace with the efficient Dallas offense. With Jerry Jeudy still getting back in the swing of things after an injury, Sutton should be the main playmaker for the Broncos on Sunday.

We see this as a great opportunity to buy low on Austin Hooper. The Browns haven’t fully utilized Hooper the way they said they would this season. We are betting that all changes this week, even against an improved Bengals defense.

Cincy does a great job of stopping the run but they still struggle in pass coverage at times during games. Hooper could be able to find some open space over the middle when protection breaks down for Baker Mayfield.

We’re using our FLEX position on Aaron Jones this week. The absence of Aaron Rodgers at QB makes us love Jones against a disappointing Chiefs defense. Matt LaFleur will call a simple game plan for new QB Jordan Love, who is making his first NFL start.

We expect Jones to get plenty of carries and have the opportunity to catch several screen passes in this game. Jones has scored 7 TDs already this year and we see him adding a couple more to that total on Sunday afternoon.

Why the heck is the Bills defense so cheap this week? Buffalo is the best defense in the league in a whole slew of categories and we see them confusing rookie QB Trevor Lawrence the entire game.

Jordan Poyer and Micah Hyde both have three picks this season and they could both add to their total against the Jags. There should be plenty of opportunities for sacks and pick 6’s in this game for the Bills.