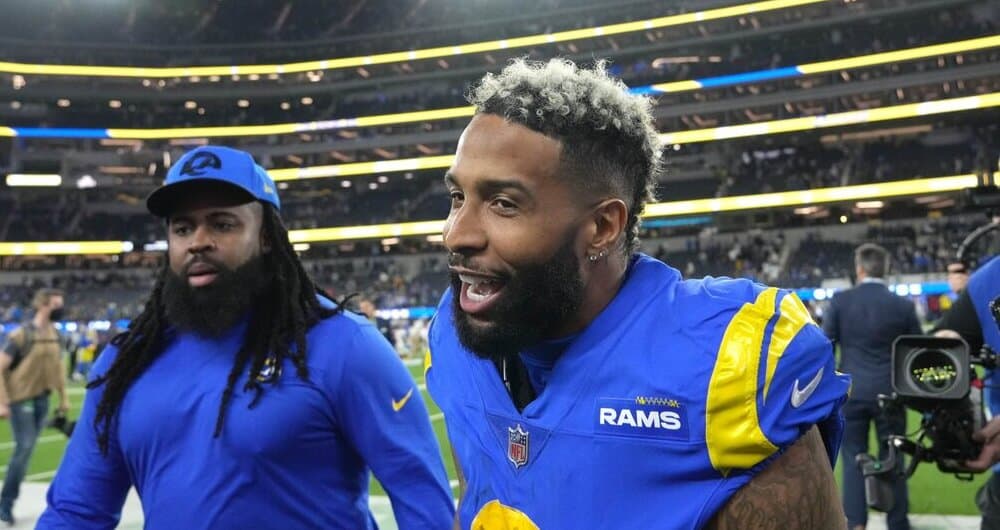 Well, NFL bettors, Super Bowl LVI will be kicking off in a matter of hours! Though we always look forward to the Super Bowl, it's always a little sad knowing that the football season is about to come to an abrupt end. Oh well, you can cheer yourself up by submitting a lineup for the DraftKings Super Bowl LVI Millionaire contest.

The entry fee is only $15 and cash prizes are awarded to every player that finishes in the top 110,750. The winner takes home a million bucks and let’s be real, playing DFS is much more fun than playing scratch-off tickets at the gas station! Here are our DraftKings lineup picks for Super Bowl LVI. For some additional takes, be sure to check out our FanDuel Super Bowl lineup as well.

The captain's spot in this contest is similar to the MVP spot in the FanDuel Big Game Bowl. The Captain’s points are worth 50% more than your other Flex players so keep that in mind before submitting your respective lineup.

We’re taking a flyer on OBJ in this spot for a few reasons. The former LSU Tiger lit up the 49ers’ secondary last week by hauling in 9 receptions for 113 yards. If Beckham can perform that well against a defense of San Francisco’s caliber, he has the potential to do even better against a subpar Cincinnati defense.

Beckham’s attitude has completely changed since he arrived in Los Angeles. Getting out of Cleveland has seemed to re-energize the 29-year old and he’s starting to show flashes of his old dominance. We love the current form that Beckham is in and that’s the main reason he’s our Captain’s pick.

Lastly, we think Beckham should get some favorable matchups in this game because most of the Bengals’ attention will be on trying to slow down Cooper Kupp. If Cincy decides to double team Kupp, Matthew Stafford should be able to hook up with Beckham on a couple of deep post patterns.

Burrow is a freaking stud who seems to perform well no matter what obstacles are against him. Just look at what Burrow has accomplished in only two NFL seasons, even with Cincy’s poor offensive line. We expect the Rams to win this game, but we also expect Burrow to put up some gaudy numbers.

Though the Rams defense is stout against the run, they don’t play the pass all that well. Los Angeles only ranks 14th in success rate against the pass. The Rams have an elite cornerback in Jalen Ramsey, but the rest of their defensive backs can be burnt deep at times.

Ramsey will probably do a great job of limiting rookie wideout Ja’Marr Chase. However, Burrow should still be able to do some damage with Tee Higgins and Tyler Boyd down the field.

Burrow averaged 288.2 passing yards per game during the regular season. We expect him to exceed that amount in this game, as the Bengals will have to pass the ball quite often just to keep up with the Rams.

Our sleeper pick for the Rams is Van Jefferson. The former Florida Gator is coming off a great second pro season that saw him rack up 802 receiving yards and 6 touchdowns. Jefferson hasn’t found the end zone since Week 14 so we think he’s due for a breakout performance.

Kupp and Beckham get the majority of the headlines for the Rams receiving corps but keep in mind that Stafford is a QB that likes to spread the ball around. Stafford targeted Jefferson 89 times during the regular season, which comes out to 5.23 targets per game. We’ll bet that one or two of those targets would result in a touchdown for Jefferson in Super Bowl LVI.

Chase was named NFL Offensive Rookie of the Year a few days ago and rightfully so. The 6-1, 200 pounder had a phenomenal rookie campaign by hauling in 81 receptions for 1,455 yards and 13 touchdowns. The former LSU Tiger is a little bit on the expensive side at over $10K, but we expect him to have a huge game.

It’s simply remarkable to see the kind of chemistry that Chase has with Joe Burrow. These two seem to always be on the same page, which is especially helpful on those back-shoulder throws that Zac Taylor loves to call. Even against a talented Rams secondary, we think Chase has the potential to grab a touchdown or two.

Our sleeper pick for the Bengals is Samaje Perine. The former Oklahoma star is a bargain at only 2400 bucks and we think he's worth rolling the dice with in this game. Cincinnati gives the bulk of the carries to Joe Mixon, but Perine has become somewhat of the go-to guy on third downs.

With this Rams dynamic defense, we think that the Bengals could be faced with a bunch of third and long situations. If that turns out to be the case, Perine could get lots of touches with screens and draws.

Also, don't forget that Perine is 5-11 and 240 pounds. He has more size than Mixon (6-1, 220) and a much thicker lower half than his old Oklahoma teammate. Because of this, Cincy may choose to use Perine in short goal-line situations.

In this contest, players aren’t required to pick a defense but we are rolling with the Rams! We've already talked about how we expect Donald, Miller, and Floyd to live in the backfield all game long. Sacks are worth one point in this contest and we think the Rams will get plenty of them in this game.

The Bengals gave up 9 sacks to the Titans' defensive line a couple of weeks ago. The Rams defensive line has even more talent than the Titans, so Burrow could be running for his life for much of this game. It wouldn’t surprise us if all that pressure helps the Rams force a turnover or two to further add to our point total.