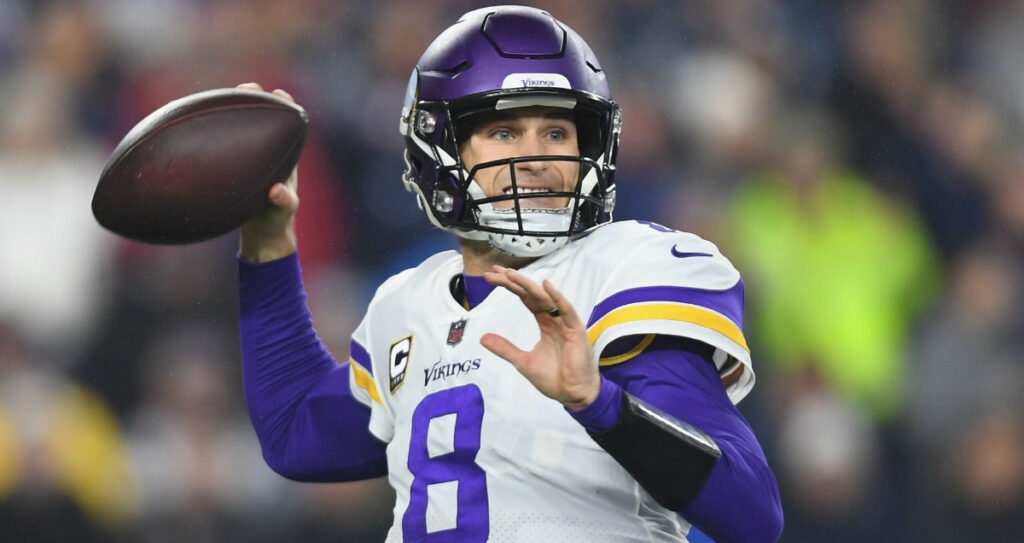 We think Vikings QB Kirk Cousins offers some value as a late round pick in your fantasy draft.

With many redraft leagues set to have their drafts in the coming days, it is important to look for any sort of advantage you can get over your league mates. Whether that is a deep sleeper that you’ve been watching since they were playing Pop Warner football in elementary school, or simply a player that you enjoy watching, drafting players with value is one of the best ways to succeed in a fantasy league.

It might be tempting to draft someone that you project to be at the top of the Quarterback or Tight End Position (AKA Josh Allen and Mark Andrews), but chances are, there will be better value picks at these positions in the 8th round or later in your draft. In a traditional fantasy league, you will need to start 1 QB, 2 RB, 2 WR, 1 TE, 1-2 Flex, 1 defense, and 1 kicker.

By the very nature of only needing to start 1 quarterback and 1 tight end, reaching for these positions early in your draft can leave you susceptible to being weak at wide receiver and running back. It’s in your best interest to use the first 6-7 rounds to secure depth at running back and wide receiver since you need to start two at both positions each week.

With all that being said, let’s look at a few late-round quarterbacks and tight ends that provide great value in drafts and can help you win your league this year. (Listed ADP's courtesy of Underdog Fantasy.)

The first quarterback that I want to highlight is none other than Kirk Cousins. Cousins is currently being drafted as the 15th quarterback off the board, which is behind Derek Carr, Dak Prescott, and Russell Wilson. In 2021, Cousins was the 12th highest scoring quarterback at 19.2 PPR points per game.

Let’s keep in mind that not only did Cousins keep his entire starting lineup, but he added a pass-friendly head coach in Kevin O’Connell. When O’Connell was coaching in LA in 2021, Matthew Stafford threw 601 times, compared to Cousin’s 561. By sheer workload alone, it wouldn’t surprise me if Cousins ended up as a top-10 fantasy quarterback this year.

By getting him in the late 9th or early 10th round of your draft, Cousins is well worth the wait. He doesn’t provide the rushing floor like Lamar Jackson or Jalen Hurts gives you, but he certainly has the weapons and experience to cover that ground.

This next quarterback is a bit polarizing, I’ll admit. He has been on three different teams in as many years. However, I think he is being extremely undervalued in drafts, especially when you consider that he finished as the overall QB14 in 2021 but is currently being drafted as the QB28.

Carson Wentz can finish as a top-15 QB again in 2022, with weapons including Terry Mclaurin, Jahan Dotson, Logan Thomas, JD McKissic, Antonio Gibson, and Curtis Samuel. I believe Wentz has every chance to prove himself in Washington, and especially when he is going this late in drafts, he is worth taking with the upside he presents. After all, he was an MVP candidate just four years ago.

Zach Ertz is currently criminally undervalued. He is currently being drafted as the 10th TE off the board, which equates to the beginning of the 9th round of drafts. At this value, he is simply too good to pass up.

Some players that are currently being drafted around him: Chase Claypool, Tyler Boyd, Cordarrelle Patterson, and Devin Singletary. I’d much rather take the second option in the Cardinals offense than any of those guys.

Ertz finished as the overall TE 5 in 2021, and I have every reason to believe that he will finish around that position in 2022 as well. One of the big reasons for this is that DeAndre Hopkins is suspended and will miss the first six games of the 2022 NFL season. This means that Kyler Murray will be to be forced to throw Ertz the ball quite often, especially in the red zone.