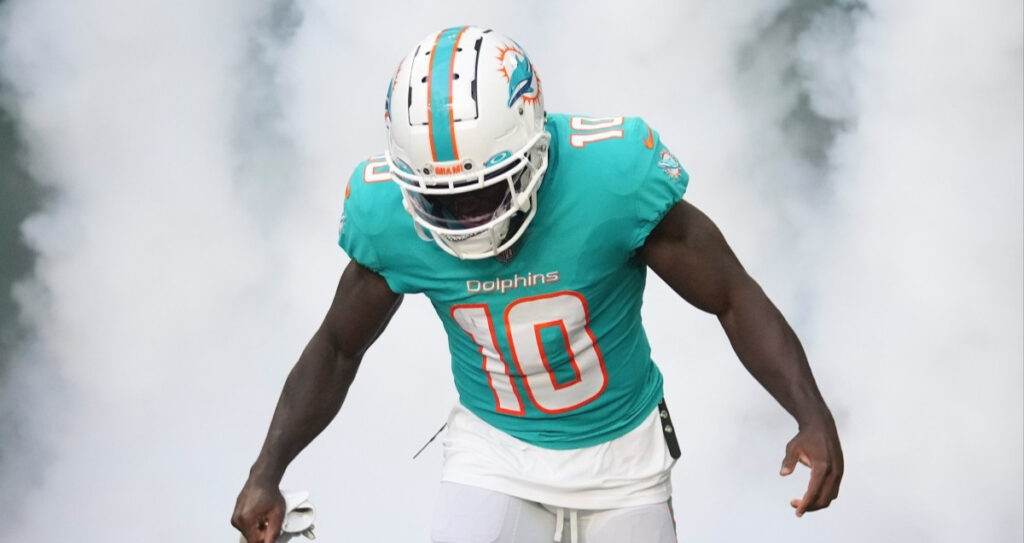 We like Tyreek Hill's longest reception to be Over 30.5 yards on Sunday Night Football!

Week 14’s Sunday Night Football matchup is a big one for the ongoing quarterback debate from the 2020 NFL Draft class. ESPN’s Bill Barnwell did a great piece this week going into detail on Miami’s Tua Tagovailoa and LA’s Justin Herbert, in addition to Joe Burrow and Jalen Hurts. They all rank among the top quarterbacks in the game three seasons into their NFL careers.

The Dolphins and Chargers will meet Sunday night for the first time since these two quarterbacks were rookies when Miami won 29-21 at home. Both Tagovailoa and Herbert threw for two touchdowns in that matchup. In this edition, Miami is a 3-point road favorite with a point total of 52 as of Friday morning.

Our Week 13 SNF props finished 2-1 by a single CeeDee Lamb receiving yard as his under cashed by the slimmest of margins. Jonathan Taylor rushed for 82 yards for our second winning play, and Matt Ryan threw for 233 yards to provide our one loss of the evening. We look ahead to this week’s Sunday primetime game and present another round of player prop best bets.

Watching for Tyreek Hill to catch the long pass may be one of the more fun bets in the NFL over the last few seasons. Hill has had a 30+ yard catch in three of his last five games and has done so in five of the team’s six road games in 2022.

The Chargers have allowed a catch of 30 yards or more each game for the last four weeks against receivers like DeAndre Hopkins and Davante Adams. Hill will continue that streak in Week 14. He's notorious for taking a 7-yard slant and turning it into massive 50-yard gains.

After clearing 12.5 carries in five of his first six games this season, Ekeler has managed to do so just twice in the next six. This has a lot to do with the fact that the Chargers’ record was 4-2 in the first stretch compared to 2-4 since.

Ekeler has three games of 12+ targets as a pass-catcher since his rushing attempts began to drop. The Miami offense poses similar problems for the game script that would dictate more carries for Ekeler and LA’s offense.

Tagovailoa and company will look to assert themselves after getting exposed by a terrifying 49ers’ defensive unit last week. The Chargers will have to continue to rely on Herbert’s arm to keep the game within one score. Ekeler may not see double-digit carries in this one, so take the Under!

Jason Sanders UNDER 1.5 Field Goals Made

Miami and LA have two coaches that are notorious for going for it on fourth down. Mike McDaniel and Brandon Staley have reputations as gamblers in that sense, and Miami has attempted just 21 field goals in 12 games. That only leads six other teams this season.

Sanders has connected on 17 of those 21 tries, and his 81% field goal percentage this season ranks 27th among NFL kickers. We like the combination of two aggressive coaches in fourth-down situations and a kicker who has been unsteady at times in 2022 to add up to a quiet night for Sanders.