Our single-game DFS lineups have been crushing all season, but this Thursday night matchup is an extremely tough game to project. There is no clear #1 receiver or running back for either team heading into tonight's game. Both quarterbacks are priced over $10,000 despite each being held under 12 fantasy points in two of their last three starts.

Our advice with a single game slate like this is to focus on cash games and single entry GPP contests. The large GPP contests are essentially lottery tickets, and unless you are willing to buy 20 tickets with the entry limit rules, you are at a massive disadvantage with so many question marks heading into the game.

Nevertheless, we have an optimal lineup for DraftKings, FanDuel, and SuperDraft and will even share a couple of prop plays we like from the week 12 Thursday Night Football matchup on Underdog and PrizePicks.

Given Davis' limited role last week, his price dropped considerably across each platform heading into tonight's contests. In fact, he is 30%+ cheaper than Gallman on DraftKings.

This is clearly an overreaction to how week 11 played out for the Falcons. Davis saw limited work in the first half, and the game was out of reach by the time Patterson was knocked out of the game. Arthur Smith has already stated that knowing they had a Thursday game this week, they decided to sit Matt Ryan and Mike Davis in the second half of the blowout loss to Cleveland.

The soft spot on this Pats defense, if there is one, is stopping running backs in the passing game. They have allowed the third-most receptions and second-most receiving yards to RB's out of the backfield on the season. With Belichick likely to take Pitts away from the Falcons offense, we expect Davis to be busy as an outlet for Matt Ryan tonight.

As we have already mentioned, we don't love playing Jones tonight and you will find some of our lineups fade the Patriots QB and start both Stevenson and Harris, assuming Bolden is in fact out.

We gave Jones a floor of 12 points and a ceiling of 20 points tonight, but in a slate littered with question marks, we are happy to take the high floor where we have to.

You really have to play Matt Ryan at home in this one. There is no game script that allows for the Falcons to get away from the pass.

The Falcons struggle to run the ball on bad defenses, so we have little faith they will be able to run it on the Patriots tonight. If the Patriots are able to get out to an early lead, Ryan could find himself in a high-volume spot tonight.

Outside of the week one loss to the Eagles, Ryan has had a 17 point floor in games where he throws the ball at least 30 times and has averaged 20 DraftKings PPG in those six starts.

While a Falcons pass-catcher did not make our optimal lineup, we are fading Pitts entirely across most platforms tonight. The Patriots are the league's top defense against opposing tight ends and you can expect Belichick to bracket Pitts on every passing down.

It is hard to love any of the Patriots' pass-catchers tonight as they spread the ball around relatively evenly to Meyers, Bourne, Agholor, and Henry. The New England running backs also have a nearly 25% target share in this offense... creating a real mess for fantasy owners.

That being said, Henry has 7 touchdowns in his last 7 games and should face little resistance from this Falcons secondary. Erik Harris and Duron Harmon have a combined coverage grade under 55 according to PFF and have given up plenty of production to the TE position, despite a ridiculously soft schedule.

Harris vs Stevenson is a clear dilemma for fantasy owners tonight, the clear solution here is to build a variation of the same lineup for each RB, but we are going with the starter if forced to pick one.

Harris was averaging over 95 rushing yards per game in his three starts prior to leaving the Carolina game with a concussion. He also had 4 touchdowns over that stretch and averaged over 21 DraftKings PPG. The Falcons give up the third-most fantasy points to opposing running backs, making him a safe play even if his role is somewhat limited tonight.

Our Preferred Lineup Across Each DFS Platform

As mentioned, we have an optimal lineup for every DFS app but as always recommend modifying with your own picks to give you an advantage tonight.

DraftKings did a great job with their pricing this week, adjusting prices on a relatively low-producing group of fantasy players to ensure building a roster was challenging. Here is our favorite Patriots/Falcons lineup on DraftKings: 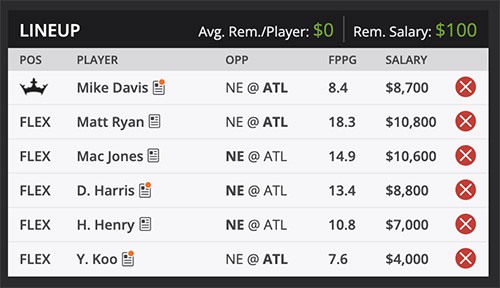 FanDuel adjusted DraftKings' mistake of pricing Gallman over Davis, but they probably left Gallman too low. Of course, this assumes Patterson is out, but if that is the case, we think Gallman sees a 35% snap share and will be involved in the Falcons passing attack. At $8,500, he allows us to start Ryan, Jones, and Harris who are all three priced above $13,500. 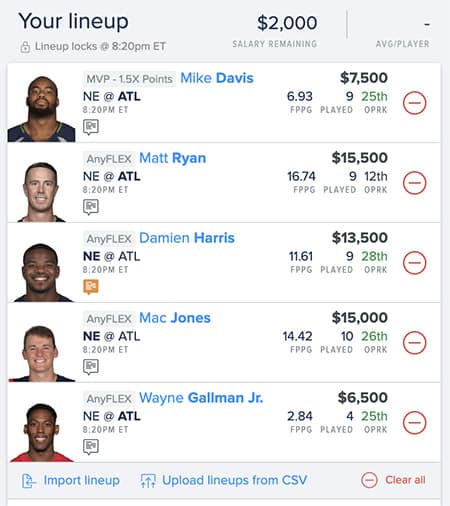 Single-game slates on SuperDraft tend to see more lineup variation than FanDuel and DraftKings. You can play it safe, ignore the multiplier and take the high-floor players, or target high-multiplier players and hope they find a way into the end zone. For us, getting 2.85x with Mike Davis in the Champion slot was a no-brainer. We also think you have to start Hunter Henry with nearly a 2x multiplier. 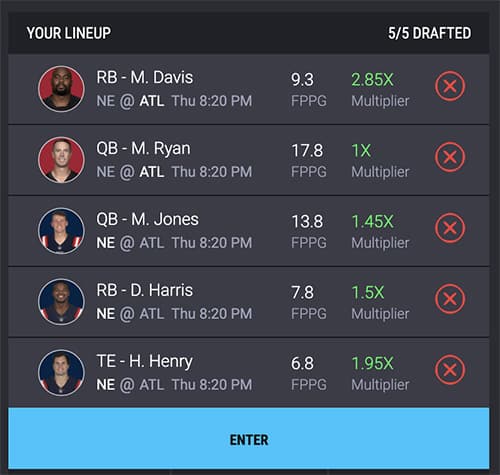 Props to Target on Underdog and PrizePicks

There are several prop bets we love for this Thursday night matchup, but the plays below are our absolute favorites.

Damien Harris - Over 50.5 Rushing Yards - As we mentioned earlier, this Falcons run defense is terrible and has only been getting worse as the season has played out. Harris may not hit the 95 yards he was averaging leading up to his injury against Carolina, but we think he cruises past 50.5.

Matt Ryan - Over 235.5 Passing Yards - We will take the bait and back Matt Ryan at home in this one. We know how dominant Bill Belichick is on short rest, but Ryan has gone over this total in 6 of his last 8 and we think the Falcons are at least competitive at home in a prime time slot.