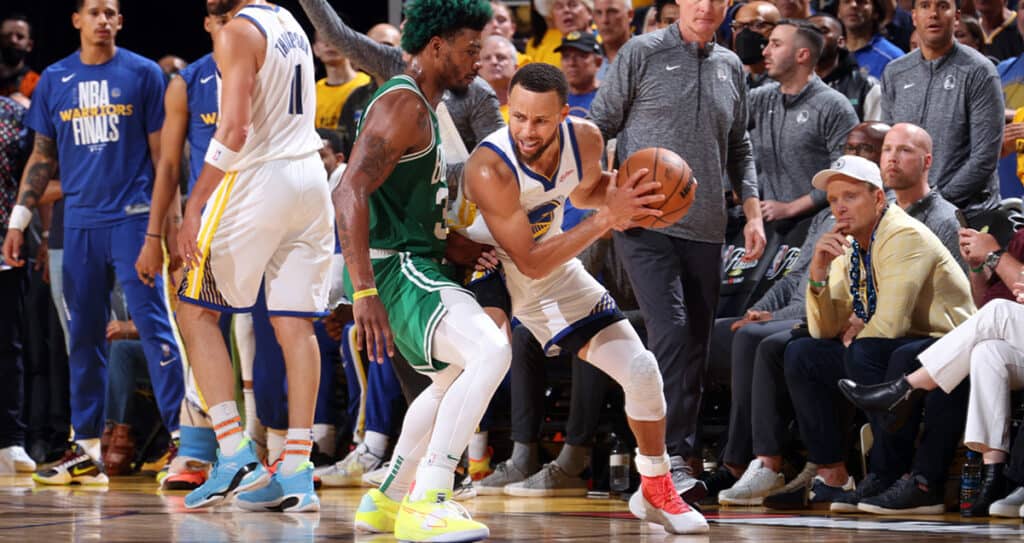 We are targeting Marcus Smart and Steph Curry in our Game 3 lineups.
By Nicholas Berault on June 8, 2022

With Game 2’s outcome becoming a formality before the start of the fourth quarter, the fantasy value of several starting players stalled out where they ended the third. This impacted the Celtics more than the Warriors, with most starters exiting the game with 10:45 to go in the fourth quarter in favor of some rest before returning home.

The Warriors had another strong performance from Steph Curry, who scored 29 points, hauled in six rebounds, dished out four assists and added three steals to end with 49.2 fantasy points. Jordan Poole resurfaced for a 26.9 fantasy points while connecting on a handful of three-pointers that made even Curry grin with excitement. As the teams travel to Boston for Game 3, we are focused on the Celtics response to a Game 2 blowout loss.

Over at DraftKings, the top contest tonight is a $1.25 million contest, with $25 entry fee, and $250,000 top prize. Like FanDuel, our current DraftKings bonus offer will allow you to enter this contest for free with $10 deposit.

Up to $100 in Free NBA Props
Claim Offer

Curry has undoubtedly heard a lot of the talk surrounding his three NBA Titles that have no Finals MVPs to pair with in his trophy case. He has put himself in position for that to change if the Warriors do win the championship this year, averaging 31.5 points, 6 three-pointers, 5.5 rebounds, 4.5 assists, and three steals per game through the first two of this series. In what could be a legacy-defining NBA Finals for Curry personally, he’s proving to be the best player on the floor so far.

Smart’s volatility is something we’ve addressed in trying to assess his game props and his fantasy value on a given night. He struggled in Game 2 after a 36-point fantasy production in Game 1, and we’re expecting the Celtics as a whole to bounce back after what we all saw Sunday night. They still hold the upper hand in the series for now in terms of home court, and Smart will provide key scoring, passing, and defending contributions to their potential success in Game 3.

Looney’s salary cap number in daily fantasy, and likely in actuality, continues to rise as he outperforms expectations when the stakes are highest. Another strong all-around performance from the Golden State big man resulted in 35.4 fantasy points in Game 2, picking up right where he left off in Game 1. We’ll continue to stick with Looney in the lineup as a key piece to the Warriors winning formula on both ends of the floor.

White has averaged 25 fantasy points per game in the Finals so far, and fits into the Celtics lineup both at full strength and in garbage time. His performance has increased the deeper the Celtics’ playoff run has extended, and we’re confident in his ability to provide another healthy fantasy contribution in Game 3.

It would have been difficult for Horford to replicate his Game 1 performance on Sunday, and he struggled to score both on the floor and in fantasy lineups. His eight rebounds salvaged a 14.1-point fantasy effort, and he should return to better form on several days rest as the Celtics return home for Games 3 and 4. We’re not going to miss out on having him in our lineup for Wednesday.