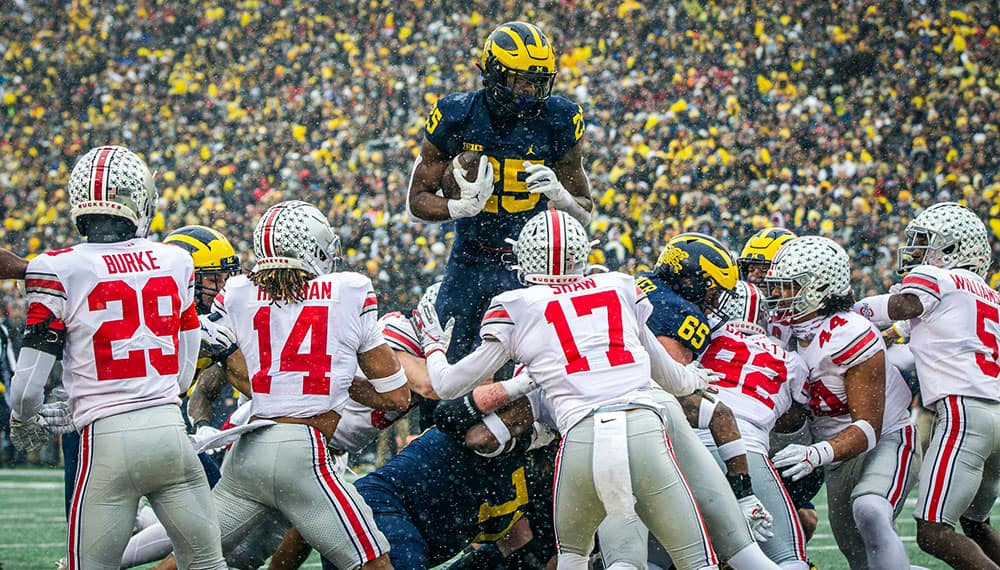 We know we aren’t the only ones that need extra caffeine on this Monday morning after a long holiday weekend. Let’s ease the case of the Monday blues by looking at what crazy bets cashed from last weekend’s NFL and college football slate.

All of the crazy bets this week were straight wagers, as we could find no huge parlays that cashed out. Even with that being said, some of these straight bets were fairly large. Here are the craziest bets from NFL Week 12 and College Football Week 13.

Watching the Detroit Lions play on the morning or early afternoon of Thanksgiving is a holiday tradition for many sports fans. One sports bettor at DraftKings was particularly interested in Turkey Day’s early tilt between the Lions and the Bears.

This hardcore Lions fan, or savvy sports investor, placed a $105,047 bet on the Lions (+3.5). Things started great for both the Lions and this bettor as Jared Goff hit Josh Reynolds for a 39-yard TD early in the first quarter.

However, things started to unravel in the second quarter, as the Bears scored 13 unanswered points. Do you think that the Chicago rally made this sports bettor lose his appetite, even on Thanksgiving?

The game turned around late in the third when Goff found his big tight end T.J. Hockenson for a 17-yard TD strike. This gave the Lions a one-point lead heading into the fourth.

The game was far from over, as veteran QB Andy Dalton engineered an eight-minute drive that had to have been incredibly painful for our betting buddy at DraftKings to watch. Imagine his intense relief when Matt Nagy chose to kick a field goal instead of trying to punch it into the end zone!

Bears kicker Cairo Santos made the 28-yard field goal to send his team home a 16-14 winner. The Lions may have blown the game but they covered the +3.5, which resulted in this bettor at DraftKings Sportsbook going home $80,802 richer!

A Gambler at Caesars Rides the Raiders to Huge Score

Lots of sports bettors love to bet on the Dallas Cowboys on Thanksgiving. The Cowboys are a popular team with a high-powered offense so they attract a great deal of betting action almost every week. One sports bettor at Caesars though wasn’t falling for all that hype.

He confidently bet $110,000 on the Las Vegas Raiders (+7.5). This turned out to be one of the best bets of the entire weekend, especially since the Raiders didn’t trail the entire game! Derek Carr shredded the Dallas secondary for 373 passing yards and the Raiders offense dominated the whole afternoon.

Sure, the game went into overtime, but the Cowboys never had a chance of covering the lofty 7.5 point spread. This may have been the easiest $100K this bettor at Caesars has ever won! Congrats on a great call!

It had been quite a while since the Michigan Wolverines had beaten the Ohio State Buckeyes. The majority of the betting public was enamored with Ohio State’s potent offense so the Buckeyes were getting lots of betting action.

That wasn’t the case for this sports bettor at BetMGM. This fellow placed a $200,000 bet on the Wolverines to win the game outright, at the nice moneyline price of +250. “The Game” was back and forth for most of the first half, with Big Blue clinging to a one-point lead at the break.

Hassan Haskins and the Michigan running game dominated the entire second half. Haskins ended up with five TDs on the afternoon as Michigan cruised to a 42-27 victory. That impressive performance by Jim Harbaugh’s crew made this guy at BetMGM $300,000 richer!

This bet wasn’t nearly as large but we have to give honorable mention to this gambler at FanDuel Sportsbook who also cashed a nice ticket on the Wolverines. The bet was a bit different, as he wagered $30,000 on Michigan (+2.5) for the first quarter.

The bet was never in doubt, as the Wolverines led 7-3 at the end of the first. What a great way to start a Saturday! The total payout was $58,302!