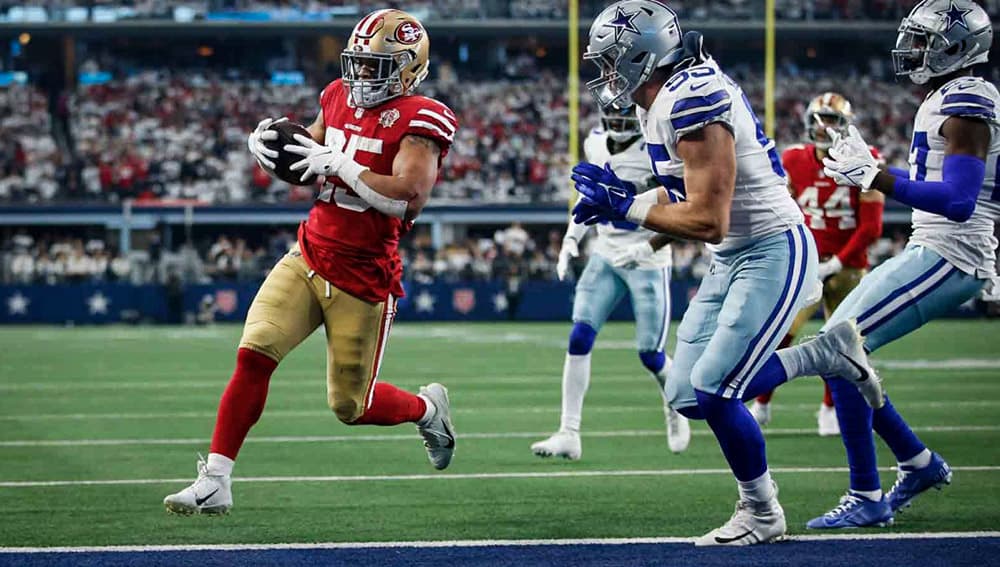 The NFL Playoffs got off to a roaring start over the weekend with six games over three days. Favorites ruled Wild Card Weekend, as the Bengals, Bills, Bucs, and Chiefs all won and covered their respective point spreads with relative ease.

Let’s take a look at some of the crazy bets that cashed from NFL Wild Card Weekend. This edition features a large moneyline bet, a straight bet, and two enormous Same Game Parlays. All five of these crazy bettors had fantastically profitable weekends!

Bengals Get Dramatic Win & Cover for 2 Bettors at Caesars

One of the most dramatic wins over the weekend was in the Las Vegas Raiders vs. Cincinnati Bengals matchup. A couple of sports bettors at Caesars Sportsbook placed $110,000 bets on the Bengals (-5).

This bet had to be placed with a couple of shots of liquid courage, especially since Cincy hadn’t won a playoff game since 1991. Most Bengals fans had to be wondering if this was the year they would break that long dry spell.

The Raiders got off to a fast start, as they took a 3-0 lead on Daniel Carlson’s 47-yard field goal early in the first quarter. Luckily for Bengals fans, Joe Burrow orchestrated a 10 play 75-yard drive that culminated in a TD pass to C.J. Uzomah. Oddly enough, Cincy would keep the lead for the remainder of the game.

However, this wasn’t a smooth ride for the two crazy bettors at Caesars! Derek Carr found Zay Jones for a 14-yard touchdown just before halftime to cut the Bengals’ lead to only seven. The two teams proceeded to trade field goals for the rest of the game.

Cincy was clinging to a seven-point lead late in the fourth when Carr and the Raiders started marching right down the field. Las Vegas got all the way down to the Cincinnati 9-yard line and you can bet that two Bengals bettors at Caesars were starting to sweat.

Fortunately, though, this story has a happy ending, as Germaine Pratt intercepted Carr’s fourth-down pass to seal the win and the cover for the Bengals! That one play helped both bettors take home $100K. What a game!

A sports bettor at FanDuel was so confident in the Buffalo Bills that he placed a $360K moneyline bet on them to beat the New England Patriots straight up. These two teams had met twice in the regular season. The Pats won the first meeting 14-10 in Week 13, while the Bills got revenge in Week 16 with a 33-21 victory.

This bet was never in doubt, as Buffalo came out like a house on fire, even in the insanely cold temperatures. Josh Allen threw two touchdown passes in the first quarter to get the Bills off and running!

The blowout continued in the second quarter, as Bills running back Devin Singletary ran for two more scores to give his team a 27-3 lead at the break. The second half was more Bills domination, and they ended up winning 47-17. This sent a crazy bettor at FanDuel in Arizona home with a net profit of $156K!

One of our customers in Arizona placed a $360,000 bet on the Buffalo Bills to beat the Patriots today 👀

The next crazy bet winner came from DraftKings Sportsbook on Sunday. One bettor with deep pockets decided to make the 49ers at Cowboys game a little more interesting with a $10,000 Same Game Parlay! The wager was made up of three different player prop bets.

Things couldn’t have gone any easier, especially on the touchdown front. Mitchell scored the game’s first touchdown with a 4-yard scamper early in the first quarter. Cooper grabbed a 20-yard touchdown reception from Dak Prescott with 5:19 to go in the second quarter.

The only leg of the parlay left to sweat was on Mitchell’s yardage total. The former Louisiana-Lafayette Ragin Cajun broke off a 5-yard run to go over the 84.5 with 5:51 left in the game.

That short run may have been insignificant to some fans, but it resulted in a $140,000 payout for our crazy bettor at DraftKings! WOW!

✅ Amari Cooper to score a touchdown

✅ Elijah Mitchell to score a touchdown

Is there anything more fun than the Anytime TD scorer props? One bettor at FanDuel happens to be a huge fan of them. He placed a $4 bet on a six-leg Anytime TD parlay.

The bet involved all three of Sunday’s Wild Card games. The first two legs were no problem at all, as Giovani Bernard and Rob Gronkowski both scored touchdowns during Tampa Bay’s route of Philadelphia.

You’re already familiar with the next two legs (our crazy bettor at DraftKings used them above), as Elijah Mitchell and Amari Cooper scored fairly early in the Niners vs. Cowboys game. This kept the huge parlay alive heading into the nighttime tilt between the Steelers and Chiefs.

These final two legs were also easy winners! Jerick McKinnon scored on a 4-yard touchdown run with 5:45 left in the first half. Tyreek Hill caught a 31-yard touchdown from Patrick Mahomes with nearly 9 minutes left in the third quarter.

That one pass turned a small $4 bet into a nice chunk of change ($4,187)! Great call! We’ll be back next week with crazy bets from the Divisional Round.