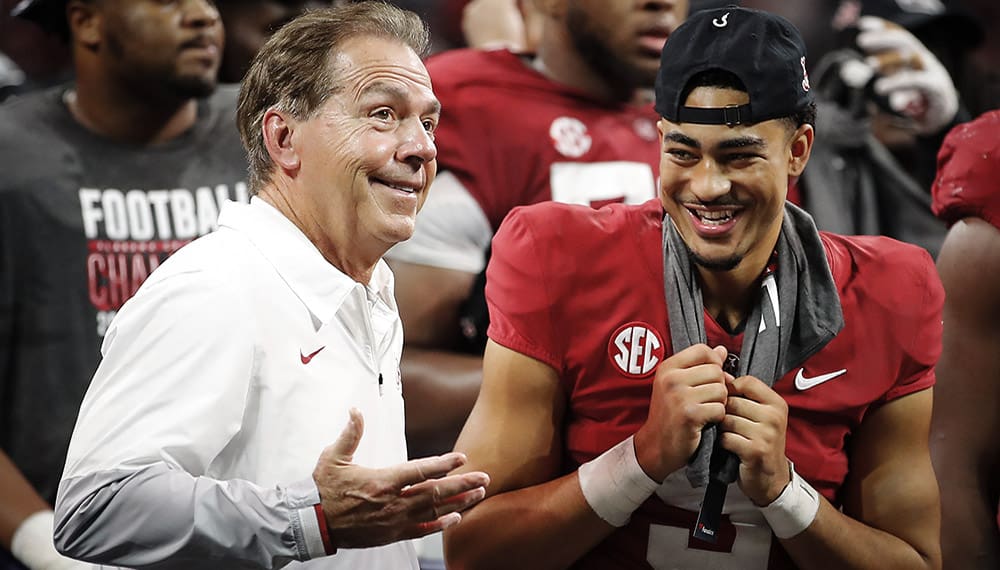 Happy Monday fellow sports bettors! Wow, what a wild and wacky weekend of football it was! We hope that college football’s Championship Weekend and NFL Week 13 treated you and your bankrolls well.

Want to see some of the crazy bets that cashed from both the NFL Week 13 and CFB Week 14 slates? That’s what we are here for! Enjoy this week’s list!

Lots of folks were down on the Dallas Cowboys after they lost outright to the Las Vegas Raiders as big favorites on Thanksgiving Day. However, one sports bettor at Caesars Sportsbook thought that Dallas would bounce back nicely against the New Orleans Saints on Thursday Night Football.

This confident Cowboys bettor placed a huge $220,000 wager on Dallas to cover the point spread of (-6) points. That was a tall order considering that Dallas was having to play New Orleans in the Caesars Superdome, one of the loudest venues in the NFL.

Things started great for the Cowboys and this Caesars Sportsbook bettor as Michael Gallup made a tremendous 1-yard TD catch to give Dallas a 7-0 first quarter lead. However, the Saints punched right back with a TD of their own early in the second quarter.

Dallas led by six points at the half and New Orleans kicked a field goal early in the third quarter to cut the lead to only three. Just as he was probably working up a good sweat, things turned around for this sports bettor.

Tony Pollard took a toss sweep 58 yards to the house and the Cowboys took a 10-point lead. It was smooth sailing from that point on, as Saints QB Taysom Hill kept throwing interceptions.

After barely squeaking by archrival Auburn in the Iron Bowl, everybody and their brother thought that the Georgia Bulldogs would put a whipping on the Alabama Crimson Tide. The negative press clippings seemed to motivate the Crimson Tide, so much so that they dominated the final three quarters of the game against the Bulldogs.

One bettor at BetMGM Sportsbook cashed in handsomely on the Crimson Tide’s success. He bet $149,955 (a weird number, we know) on Alabama to win the game at the juicy moneyline odds of +190.

This fella had to be sweating heavily when Georgia got out to a quick 10-0 lead. However, all the momentum swung to the Tide when Heisman hopeful Bryce Young hit his speedy wideout, Jameson Williams, for a 67-yard TD early in the second quarter.

Four and a half minutes later, Young hit John Metchie for a 13-yard TD that put the Crimson Tide up 14-10. Georgia tied the game up at 17 apiece late in the second quarter but Alabama scored just before the half to take a 24-17 lead.

The second half was all Alabama, as the defense baited Stetson Bennett into a couple of costly interceptions, one of which was a pick-six. This gave Alabama the SEC Championship and sent our crazy BetMGM bettor home with a $284,914 score! Holy cow!

Bettor at DraftKings Cashes in BIG with Michigan

The Michigan Wolverines have been on one heck of a point spread run this season. One bettor at DraftKings Sportsbook decided to ride that hot streak with a $23,000 bet on Michigan (-12).

Some bettors felt that 12 was too many points for Michigan to cover against a pretty stout Iowa Hawkeyes defense. However, the Wolverines came out fired up and led by 11 points at halftime.

The second half was all Big Blue, as Iowa’s defense was eventually worn down by the huge offensive line of Michigan. The Wolverines racked up four rushing touchdowns and ended up winning by a whopping 39 points!

This was a tremendous win for our crazy bettor at DraftKings! The total payout was $43,909!

Some sports bettors with some deep pockets cashed out in a big way with the early slate of NFL games on Sunday! The largest bet was on the Chargers +3 (+100) for $350,000!

That bet was the easiest of this group to cash, as the Chargers came out like a house on fire after getting embarrassed by the Broncos last weekend. Justin Herbert and company took a 24-0 lead before Cincy finally woke up from their post-Steelers win hangover! This bettor got to experience a nice, stress-free $350K win!

Another bettor placed a $275K bet on the Tampa Bay Bucs at the lofty spread of -10. This bet was filled with dramatic twists and turns the entire game as the Falcons refused to go away quietly. With a 10-point lead, Tom Brady threw an uncharacteristic pick six to give Atlanta momentum just before halftime.

Though it was a struggle, this Caesars sports bettor also went home a winner. Ryan Succop made a 31-yard field goal and the Bucs defense stood tall at the goal line to avoid a devastating backdoor loss for this bettor.

The Vikings came storming back and even took a four-point lead with only 1:50 to go in the game. Though the point spread cover was never in doubt, Jared Goff gave the Lions their first win of the year with a last-second TD strike to Amon-Ra St. Brown. What a win, both for the Lions and this bettor at Caesars!