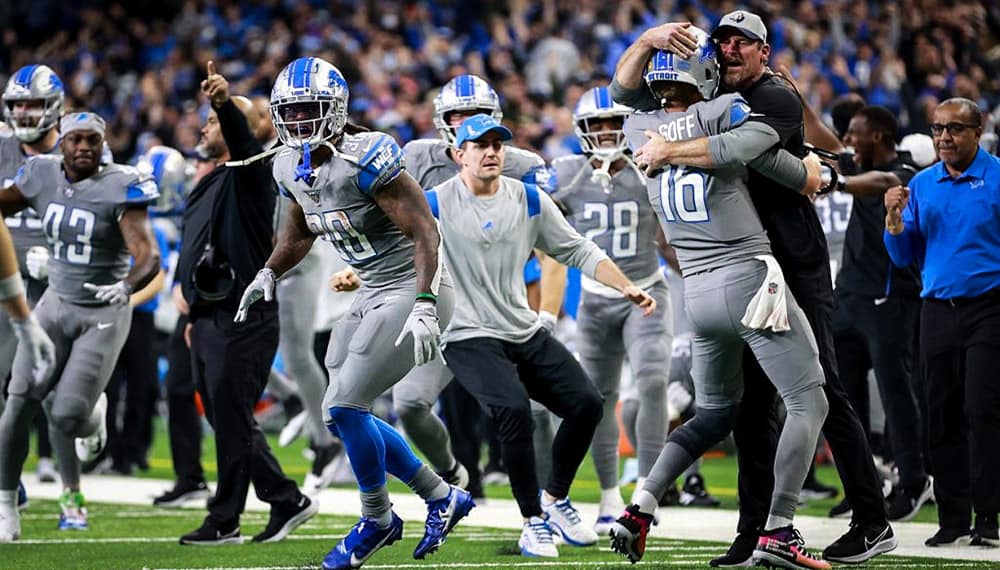 WOW! What a wild and wacky sports weekend it was! Can you believe that the Detroit Lions blew out the Arizona Cardinals as 13 point underdogs? We’ll talk more about that one in a minute!

This week’s crazy bets include a huge moneyline win, a large NFL straight bet, a gigantic wager on the Boca Raton Bowl, and a three-leg NBA parlay (and a partridge in a pear tree)! Let’s get to the list of crazy bets.

We know it’s still football season but we have to recognize this tremendous 3 leg NBA parlay that was cashed over at FanDuel Sportsbook. A sports bettor named Tommy O’Brien placed a $50 bet on three NBA player props.

The first leg of O’Brien’s wager needed Blake Griffin to hit at least (3) three-pointers. It was a sweat but Griffin made three of his ten shots from downtown.

The second leg was on rookie Scottie Barnes to score at least 20 points against the Golden State Warriors. Again, this one was close but Barnes ended up pouring in 21 points to help the Raptors get a 119-100 win.

The final leg was the most unlikely one to hit. O’Brien needed Reggie Jackson to record a double-double. This was a longshot as the odds on it were +1300. However, Jackson pushed this ticket to the finish line with 16 points and 10 assists!

A 𝗠𝗔𝗚𝗜𝗖𝗔𝗟 night in the NBA for this bettor

College Football Bowl Season kicked off last Friday and it truly is the most wonderful time of the year for hardcore college football fans. One bettor at Caesars Sportsbook got his bowl season off on the right foot with a $110,000 bet on the Western Kentucky Hilltoppers +3 in the Boca Raton Bowl.

This was a no-sweat rocking chair type of win for this sports bettor! The Hilltoppers came out fired up and ended up winning the game by 21 points. Western Kentucky led by seven at the half before a huge third quarter blew the game wide open!

All World QB Bailey Zappe set single-season records for both touchdowns and passing yards. Zappe and the dynamic Hilltoppers offense made this bettor at Caesars $100,000 richer! What a win!

Looking to cash in on this bowl season? Track all of our college football picks and find our recommended bets for every major bowl game. Our betting guides for the Cotton Bowl and Orange Bowl are already live!

The NFL treated us all to some Saturday night action as the New England Patriots took on the Indianapolis Colts. The majority of bettors were riding the Patriots’ seven-game winning streak. New England was also well-rested coming off a bye so that made them seem like the correct side.

One sports bettor with deep pockets wasn’t buying into the hype. He placed a $362,000 bet at BetMGM Sportsbook on the Colts -2.5 spread. Indy came out fired up at home and led 20-0 before the Patriots finally woke up in the fourth quarter.

Mac Jones made it a little bit interesting as he found Hunter Henry for a 7-yard TD with just over two minutes left to cut the Colts lead to three. However, Jonathan Taylor quickly slammed the door shut with a 67-yard TD run that put the game on ice. The total payout on this bet was a whopping $691,094!

Lions Stun Cardinals as a +525 Underdog

We saved the best for last this week with the Detroit Lions’ huge upset win over the Arizona Cardinals. The Lions were a 13-point underdog. Almost nobody gave Detroit a chance to win this game, even after the Cards looked shaky on Monday Night Football just six days prior.

One bettor at DraftKings Sportsbook was a believer in the Lions and it paid off rather handsomely. He bet $3,000 on Detroit at the generous moneyline odds of +525.

The Lions came out ready to roll and led 17-0 at the half. Arizona woke up a little bit in the second half but it was too little too late for them. Jared Goff dropped dimes all day long as he finished 21 of 26 for 216 yards and 3 TDs.

Detroit won the game by a final score of 30-12 in what was one of the most unexpected outcomes of the entire NFL season. You have to give this Lions team credit for continuing to fight hard each week. The payout on this DraftKings bettor’s wager was $18,750!