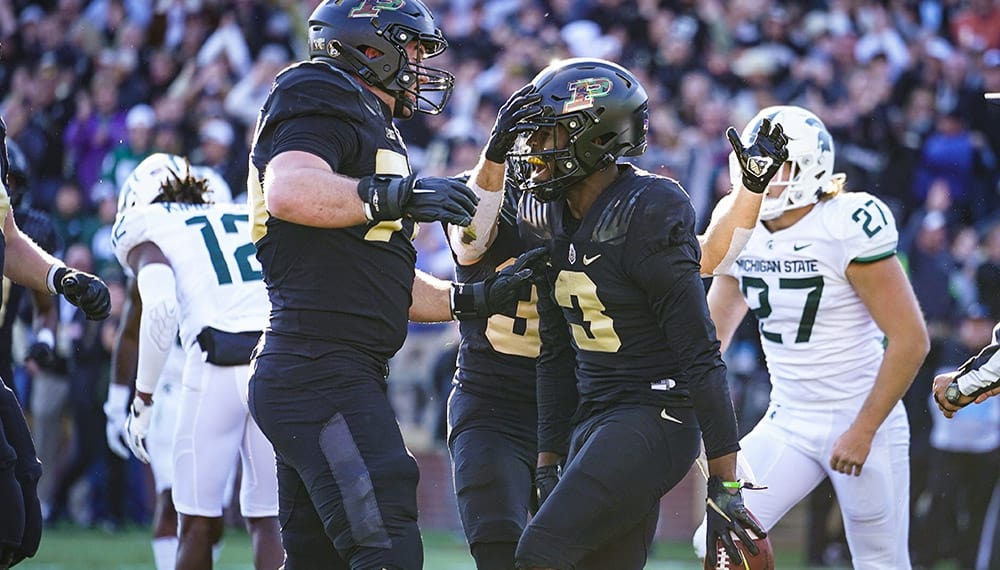 Good Monday morning once again fellow gambling degenerates! You all know what time it is! Let’s check out some of the crazy bets that cashed from NFL Week 9 and College Football Week 10.

There were plenty of upsets in both college football and the NFL this week. One of the biggest shockers was the Jaguars beating the Bills straight up as 15-point underdogs. The most unlikely outcome in the college ranks was South Carolina, a 20.5 point underdog, taking down Florida!

A sports bettor at BetMGM Sportsbook got his football week off to a splendid start. He wagered $150,000 on the Over 45 in the Thursday Night Football game between the New York Jets and Indianapolis Colts.

This gambler showed a lot of courage by making this bet, especially since both teams have lackluster offenses. Can you imagine how much this bettor’s blood pressure went up when Jets QB Mike White got injured early in the game?

Luckily for this guy, the injury didn’t slow down the scoring at all. The Colts led 28-10 at the half and this bettor ended up counting his win with about six minutes left in the third quarter! The total payout was $136,000! Life is too short to bet on the Under!

Two sports bettors at Caesars thought that Purdue would upset #3 Michigan State on Saturday afternoon! The Boilermakers are now lovingly known as the Spoilermakers since they just keep crushing highly ranked teams’ dreams!

Purdue got off to a great start and led by seven points at the half. Michigan State punched back and tied the game early in the third. Right after that though, the Boilermakers dominated the Spartans by outsourcing them 19-8.

Purdue ended up winning 40-29 and both of these bettors at Caesars cashed out big!

Undefeated no more.
Purdue (+115) does it again, this time upsetting Michigan State

Probably the craziest bet that cashed over the weekend was this two-leg parlay from a guy over at DraftKings Sportsbook. He bet $500 that both the Denver Broncos and the Jacksonville Jaguars would win their games outright!

Just how unlikely was this parlay to cash? Denver was +340 on the moneyline to the Dallas Cowboys. Jacksonville was a +700 underdog to defeat the big bad Buffalo Bills.

The Broncos dominated the Cowboys from start to finish so this guy didn’t even have to sweat that portion of the wager. Denver ended up winning 30-16 and the game was never close.

The Jags portion of the ticket provided tons of drama. Jacksonville’s defense confused Bills QB Josh Allen most of the afternoon and even picked him off twice! The game was tied 6-6 at the half.

The second half was an ugly defensive struggle. Neither team could generate any momentum on offense. Jaguars kicker Matthew Wright nailed a 21-yard field goal with 12:10 remaining to put his team in front for good.

Chargers Bettor at Caesars Wins $500K in a Nail Biter

One of the largest wagers we saw cash in the NFL was on the Los Angeles Chargers. A sports bettor with deep pockets at Caesars Sportsbook wagered $550,000 on the Chargers -1.5.

The Chargers were on a cross-country trip to Philly to play the Eagles, so the spot was less than ideal. Justin Herbert and the Chargers’ offense got off to a fast start by taking an early 7-0 lead. However, the Eagles put together a nice second quarter to take a 10-7 halftime lead.

The rest of the game was a back-and-forth thriller with two ties and four lead changes. We are pretty certain this bettor was on an emotional roller coaster the entire second half!

The result was a good one though, as Herbert patiently led the Chargers down the field for the game-winning field goal. We’re betting this guy was jumping for joy when Dustin Hopkins' kick sailed through the uprights! Winning half a million bucks has to feel pretty darn good!