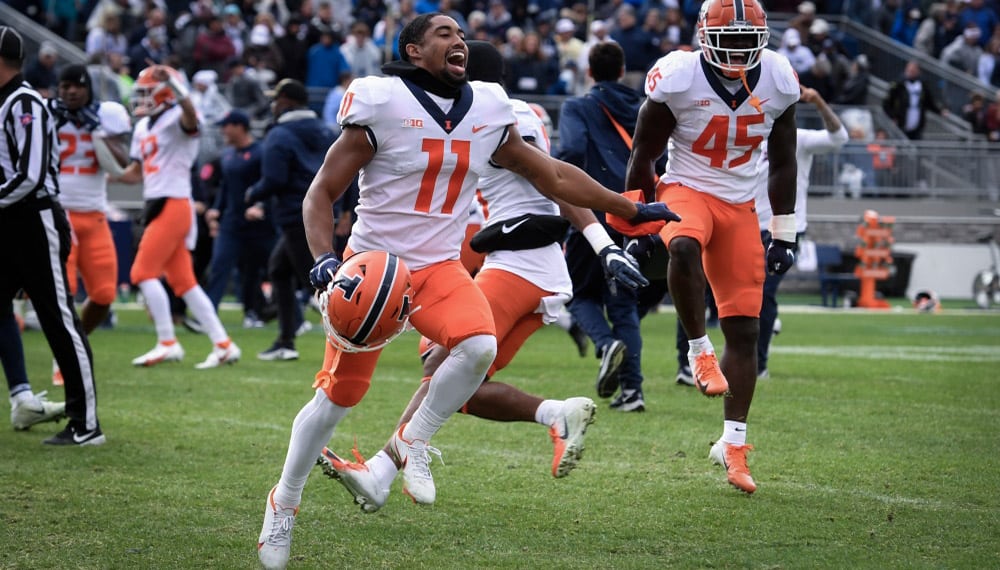 Good Monday morning fellow sports bettors! It’s our favorite time of the week. Let’s grab a cup of coffee and review some of the craziest bets that cashed in Week 8 of college football and Week 7 of the NFL slate.

By far the biggest upset on the Week 8 college football board was #7 Penn State losing outright to Illinois as 24.5 point underdogs! As far as the NFL goes, there weren’t many outright upsets, but the Bengals crushing the Ravens as 6.5 point underdogs was a definite surprise. Cincy went off as high as +250 on the moneyline.

Want to hear something incredibly crazy? How about a four-team moneyline parlay bet for $30,000? This guy parlayed two NBA teams (Nuggets and Kings) with Appalachian State in college football and the Cleveland Browns on the Thursday Night game!

The parlay got off to a great start on Wednesday when unranked Appalachian State pulled off a shocking upset over #14 Coastal Carolina. The NBA bets came home as well as Denver +195 and Sacramento +205 both won outright!

The day of reckoning was on Thursday, as the final leg of the parlay was the Cleveland Browns to win straight up. He had the option to cash out for over $651,000 but chose to let it ride. That was incredibly ballsy considering that the Browns were without starting QB Baker Mayfield, who was out with an injured shoulder!

What was the result? He literally became a millionaire overnight when the Browns took care of business against the Broncos! The total payout of the bet was over $1.3 million! Talk about life-changing money! We’re betting this guy has distant cousins coming out of the woodwork wanting to be his new best friend!

One lucky bettor at BetMGM sportsbook put his faith in Melvin Gordon and it paid off handsomely. This person bet $20,000 that Gordon would score a touchdown at odds of +200.

This bet took some serious guts, as Gordon isn’t nearly as dynamic as he used to be and he hadn’t scored a touchdown since Week 3 against the lowly Jets. The bet was looking bleak at the half because the Broncos’ offense couldn’t muster any momentum.

Luckily Teddy Bridgewater and company woke up somewhat in the third quarter, as he found Gordon for an 8-yard touchdown pass. This brought the Broncos to within three points of the Browns, but more importantly, it gave this sports bettor a $40,000 win! What a score!

We have a BIG believer in Melvin Gordon 🚨

Here is the aforementioned moneyline bet on the Illinois Fighting Illini. Hardly anyone gave Bret Bielema’s squad much of a chance against the mighty Penn State Nittany Lions. However, this fellow at Caesars put $1,000 on Illinois at the juicy moneyline of +1200!

We would have paid to have watched this guy sweat out this bet, as this game took 9 overtime periods to complete! This bettor hit pay dirt when Illini QB Brandon Peters found Casey Washington in the back of the end zone for the game-winning two-point conversion! It may not be $1.3 million but $12K is still a massive payday!

Congrats to the #CaesarsSportsbook bettor in NJ who bet $1,000 on Illinois (+1200) to upset Penn State and won $12,000.#WinLikeACaesar pic.twitter.com/6putVvfB0M

The Kansas City Chiefs are usually one of the most publicly bet on teams each week. Andy Reid engineers a high-powered offense that has a ton of superstars like Patrick Mahomes, Travis Kelce, and Tyreek Hill.

Week 7 was no different, as lots of bettors took the Chiefs on the moneyline or with the (-4) point spread. One sports bettor at Caesars went against the grain and took the Titans to win outright as +210 odds.

This guy had to feel like a betting genius as the Titans led by 14 at the end of the first quarter. They also led 27-0 at the half! Tennessee ended up routing Kansas City to the tune of 27-3, making this bettor $462,000! Great pick!

The one advantage that parlaying prop bets with a sportsbook over a fantasy app like PrizePicks has is that you can get crazy big payouts on improbable wagers like the one here. Clearly, it is pretty rare for a bet like this one to cash, and sportsbooks clean up on these wagers over the course of a season, but it's still fun to see a winning ticket like this one.

While the first four legs of this parlay were fairly predictable with relatively unattractive odds, you have to respect the Mo Alie-Cox +500 leg of this bet. That being said, big Mo did have 3 touchdowns in his previous 3 games, so maybe +500 was the wrong number here? That being said, given the way the weather turned out for the Sunday Night game, we probably wouldn't have touched a receiving touchdown at any number.

This bet comes from last Monday, but we missed it and couldn't help but share a parlay this big. A BetRivers Sportsbook bettor nailed a 12-team parlay that returned over $5,100 on a $5 wager.

Perhaps even more impressive than just hitting a 12-leg parlay is the way this bettor did it, mixing spreads and underdog moneylines. The bettor also wisely cashed out before the Sunday night game, where his Seahawks moneyline bet would have cost him the ticket.

This bettor cashed out a 12-pick NFL parlay after 10 winners.