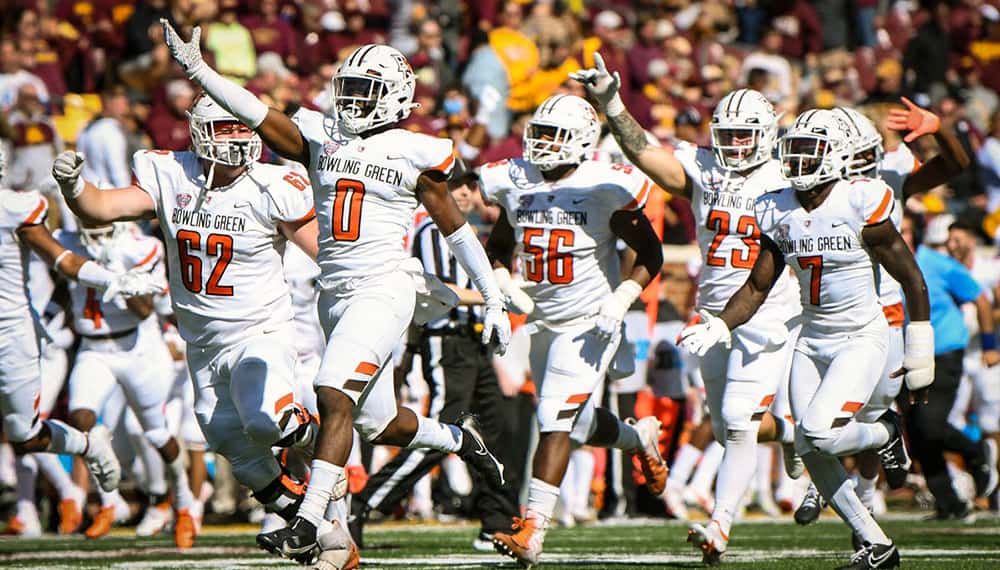 Happy Monday to all EWB readers! It’s our favorite time of the week. Let’s check out some of the craziest bets that cashed big in Week 4 of college football and Week 3 of the NFL.

This week’s crazy bets feature a mixture of high-dollar straight bets on both sides and totals. The folks that cashed these tickets are probably still reveling in the thrill of victory! They may still be a bit hungover from celebrating as well.

The Bowling Green Falcons are statistically one of the worst teams in college football. However, that didn’t stop them from upsetting P.J. Fleck and the Minnesota Golden Gophers as 28 to 1 underdogs. Some sportsbooks even had the moneyline as high as +4000.

Not many sports bettors cashed in on this huge upset as there weren’t many sportsbooks that even offered a moneyline on it. However, there was $50 in moneyline bets placed at South Point in Las Vegas. It appears there may be some holes in Fleck and the Gophers’ boat.

Only $50 in total ML bets at South Point on Bowling Green.

Few books even offered a ML

This fella at DraftKings probably thought he was home free with this gigantic wager, especially when Adrian Martinez scampered into the end zone to give Nebraska a 20-13 lead with seven minutes to go in the game. Little did this guy know he was in for a major sweat!

Michigan State ended up tying the game on a 62-yard punt return touchdown with a little less than four minutes left. Sparty ended up winning in overtime 23-20. However, this DraftKings bettor cashed his $200K by the hook since he had the Huskers at +3.5! Remember, every half of a point matters!

Arizona vs Oregon coming up on ESPN.

We’re betting that this gambler at Caesars partied well into the wee hours of Sunday morning after cashing this huge ticket on the OVER 58.5 points in the Arizona / Oregon game.

This bettor had to be pacing furiously until Ducks DB Bennett Williams picked off a pass and took it 68 yards to the house! This pushed the game Over the total and made this lucky sports bettor $200,000 richer! He probably felt like he’d won the “Pick 6” lottery! 🙂

The most nerve-wracking crazy bet win of the week may have been this one at Caesars, where a sports bettor had $330K riding on the Over 44.5 points. Don’t you know he was a total wreck when Brian Flores went to the wildcat offense with time running out in the game!

The Dolphins kept getting stuffed by the Raiders’ defense near the goal line and there had to have been some serious cuss words being thrown at the TV! Thankfully, Jacoby Brissett dove into this end zone with two seconds to go to send this game OVER the total. We’re thinking he needed a cocktail (or five) to settle down after this dramatic win!

Caesars took three substantial wagers on the iconic Sunday Night Football matchup between the Packers and the 49ers. One poor soul lost $330K by betting on the San Fran moneyline at -165. However, two Green Bay bettors cashed out big!

One guy had $110K on the Pack at the generous point spread of +3.5. That bet was a nice, easy, rocking-chair type of winner since the Packers led the game from start to finish.

Another bettor had much more of an adrenaline rush as he had $80K on Green Bay on the +145 moneyline. Jimmy G led the Niners down the field for what appeared to be the game-winning touchdown with 37 seconds to go.

As he proved last night, 37 seconds is plenty of time for Aaron Rodgers to get his team into field goal range. Rodgers hooked up with Davante Adams on two long passing plays and Mason Crosby nailed a 51-yarder as time expired. This gave both the Pack and this moneyline bettor a huge victory!