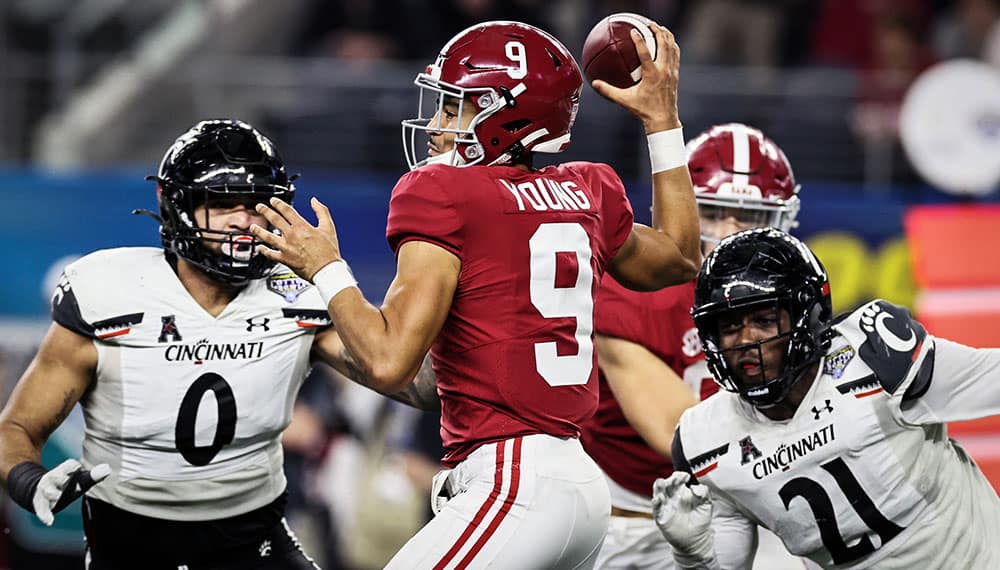 Crazy Bets That Cashed from Bowl Season and NFL Week 17

Happy New Year to all of our faithful readers! It’s Monday, which means it’s time to take a look at some of the crazy bets that cashed from last week. This edition is filled with three college football bowl bets and one gigantic bet from the NFL Week 17 slate.

Bettor at Caesars Cashes In on Music City Bowl Craziness

One of the wildest games of bowl season was the Music City Bowl matchup between the Purdue Boilermakers and the Tennessee Volunteers. So much public money came in on the Vols (mainly because of all the Purdue opt-outs) that the oddsmakers were forced to move the point spread from Tennessee (+3) all the way up to Tennessee (-7.5).

One sports bettor at Caesars Sportsbook decided to fade the public and jump on the Boilermakers (+7.5). Things didn’t start well for him though, as Tennessee’s offense came out hot and led 21-7 at the end of the first.

However, Purdue came storming back in the second quarter by scoring 16 unanswered points. The key play was when Vols QB Hendon Hooker fumbled just before halftime. Boilermakers QB Aidan O’Connell threw a 2-yard TD pass to give his team their first lead of the game with 19 seconds left in the half.

The game was back and forth the entire second half but since this sports bettor had +7.5, it wasn’t much of a sweat for him. Purdue ended up winning the game outright in overtime with a 38-yard field goal. That sent this crazy bettor home $100,000 richer!

A sports investor over at FanDuel Sportsbook started off New Year’s Eve in grand fashion. He wagered $110,000 on Wake Forest (-16.5) over Rutgers in the Gator Bowl.

This was a popular bet, especially since the Demon Deacons were ranked 17th in the country and run such a high-powered offense. Rutgers hung tough in the first half and were only down by ten points.

Luckily for this crazy bettor at FanDuel, the second half was all Demon Deacons! QB Sam Hartman had a phenomenal second half and the Wake Forest defense shut down the Scarlet Knights rushing attack.

Wake Forest ended up with a comfortable 38-10 win. This easily covered the hefty point spread and this bettor won $100,000. We’re betting he partied like a rock star for the rest of 2021.

As expected, there was a ton of action on both College Football Playoff games on New Year’s Eve. One bettor at DraftKings decided to jump on the Alabama Crimson Tide bandwagon. He bet $99,000 on Nick Saban’s crew to cover the rather high (-14.5) point spread.

This bet was a bit nerve-wracking, as Alabama’s offense took quite a while to get going. The Tide only led 7-3 at the end of the first quarter and this bettor may have been thinking that his New Year’s Eve was ruined.

Things changed just before halftime though, as Heisman Trophy winner Bryce Young found Ja’Corey Brooks for a 44-yard TD. This gave Alabama a 17-3 lead at the break.

Cincy added an early field goal in the third quarter to pull within 11 points, but the fourth quarter was all Alabama. The Crimson Tide running game completely took the game over behind a stellar performance from RB Brian Robinson. Alabama ended up winning 27-6 and this bettor added a nice profit of $86,086 to his betting bankroll.

We saved the largest crazy bet of the week for last. A sports bettor at Caesars Sportsbook with deep pockets placed a $385,000 bet on the Chicago Bears (-6) over the New York Giants. This bet took quite a bit of courage to make, especially since ‘Da Bears were only 5-10 coming into this game and were without rookie QB Justin Fields because of an ankle injury.

Nevertheless, Chicago showed up ready to play in front of their home fans. The Bears got out to a quick 14-0 lead behind touchdowns from David Montgomery and Darnell Mooney.

The Giants got on the board in the second quarter with a Graham Gano field goal. Little did the G-Men know, that would be their only points of the entire afternoon. The Chicago defense terrorized Giants QB Mike Glennon the whole game and caused him to turn the ball over four times.

The Bears ended up winning by 26 points and easily covering the (-6) spread. Our crazy bettor at Caesars had to be smiling the entire day! It’s not often that you profit $346,500 so easily!