3 Crazy Bets that Cashed from the NFL Playoffs Divisional Round 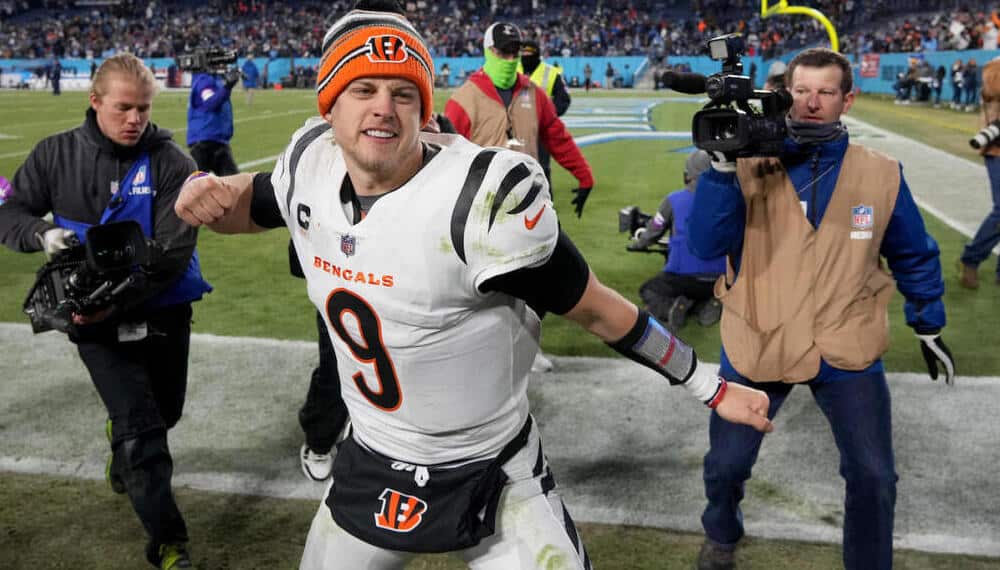 WOW! What an amazing weekend in the NFL Divisional Round of the Playoffs! All four games were not only entertaining, but they each came down to the final play as well. It may have been the best weekend in NFL Playoffs history!

This week’s edition of Crazy Bets features two insanely large straight bets and one live bet with an unlikely outcome. If you happen to know any of these big winning gamblers, make them buy you lunch today or at least some coffee! Let’s get to it!

Caesars Sportsbook has a reputation for taking large wagers, and the NFL Playoffs tend to bring out some of the biggest gamblers in the world. One sports bettor at Caesars bet $1.1 million on the Cincinnati Bengals to cover the +3.5 point spread against the Tennessee Titans. We’d consider this the sports betting version of “Who Wants to Be a Millionaire”!

This bet took a ton of courage to make, especially when you consider the Bengals’ subpar offensive line! Nevertheless, this crazy bettor was bound and determined to put his faith and his money in Joe Burrow and the boys from Cincy!

Things started great in the first quarter, as Evan McPherson nailed two field goals to give the Bengals a six-point lead. The Titans’ offense finally woke up in the second quarter when Derrick Henry, who had missed the last half of the season with a broken foot, found the end zone from three yards out.

Our million-dollar bettor had to be sweating a bit, as the score was tied at 6-6. However, Burrow and company put together a nice drive just before the half that ended in a 54-yard field goal from McPherson. This gave Cincy a 9-6 at the break.

The second half started wonderfully for the “Who Dey” nation! Former Oklahoma standout Joe Mixon broke off a 16-yard touchdown run to give Cincy a 10 point edge. The Titans refused to go away quietly though, as former Bengal Randy Bullock hit a 34-yard field goal to pull Tennessee within 7.

Though the Bengals still had the lead, things were looking dicey. The Titans defensive line kept putting an enormous amount of pressure on Burrow on every Bengals drive. Tennessee ended up with 9 sacks in the game!

With 15 seconds left in the third quarter, Ryan Tannehill threw a dart to A.J. Brown for a 33-yard touchdown that tied the game at 16 all. Each team’s offense then continued to trade punts the entire fourth quarter.

The Titans looked to be in a position to win the game as they got the ball back just before the two-minute warning. Tennessee had the ball at their own 40 yard line when Tannehill was intercepted for the third time of the afternoon by the Bengals’ defense. That’s when Burrow and company went to work.

The former Heisman winner found his old LSU teammate Ja’Marr Chase for a 19-yard gain. That play set up McPherson for a game-winning field goal that sent the Bengals to the AFC Championship Game and our crazy bettor home with a million-dollar payday!

A gambler at DraftKings Sportsbook got his Sunday off to a fabulous start by betting $300K on the Los Angeles Rams +2.5 (+100) over the Tampa Bay Bucs. It’s always hard to bet against the GOAT Tom Brady but in this case, it paid off quite handsomely.

The Rams got out to a quick 10-0 lead when Matthew Stafford tossed a 7-yard touchdown pass to Kendall Blanton. The Bucs answered with a 45-yard field goal from Ryan Succop just a couple of minutes later. Little did Bucs fans know that this would be their team’s only score of the first half.

Cooper Kupp was the star of the second quarter, as he hauled in a 70-yard touchdown reception to put the Rams up by two touchdowns. Matt Gay later added another field goal to give the Rams a 20-3 lead at the half.

Tampa Bay pulled to within 14 points late in the third on a 1-yard touchdown run from Leonard “Playoff Lenny” Fournette. The Rams had several opportunities to slam the door shut but their offense kept fumbling the ball back to the Bucs. The crazy bettor at DraftKings had to be irate as Kupp and Cam Akers both turned the ball over.

All sports bettors know to never count out Tom Brady! The 7-time Super Bowl champion hit Mike Evans for a 55-yard touchdown strike with 3:20 left in the game. This brought Tampa Bay to within seven points.

A few minutes later, “Playoff Lenny” struck again with a 9-yard touchdown run to tie the game at 27 all. The Rams got the ball back with 42 seconds left. That’s when Cooper Kupp took over once again.

Stafford found Kupp on a 20-yard sideline route before hitting him on a deep go-route for a 44 yard gain. This set up Matt Gay for the game-winning 30-yard field goal. What a win for the Rams and a certain high roller at DraftKings!

Our last crazy bet came from a sports bettor at FanDuel Sportsbook in New York. The Empire State recently launched mobile sports betting and this gambler at FanDuel decided to place a live bet on the Bills vs. Chiefs game.

Wanna hear the wildest thing about this crazy bet? This guy bet on the Chiefs +1600 with only 13 seconds left in the game! Josh Allen had just thrown a 19-yard bullet to Gabriel Davis to give the Bills a 36-33 lead!

This bettor at FanDuel must have known that 13 seconds was still plenty of time for an elite quarterback like Patrick Mahomes to get into field goal range. He was proven right as Mahomes hooked up with Tyreek Hill and Travis Kelce for nice chunk yardage plays. Harrison Butker then nailed a 49-yard field goal to send the game to overtime!

Kansas City won the coin toss and that was all she wrote, as Mahomes shredded the Buffalo defense with surgeon-like precision. The last play saw Mahomes hit Kelce in the back corner of the end zone!

This sent the Chiefs to yet another AFC Title Game! It also turned a $150 live bet into a nice $2,550 score! We’ll be back next week with crazy bets from the Conference Championship Games!

FanDuel in New York offered 16/1 on the Chiefs with 13 seconds left in regulation.