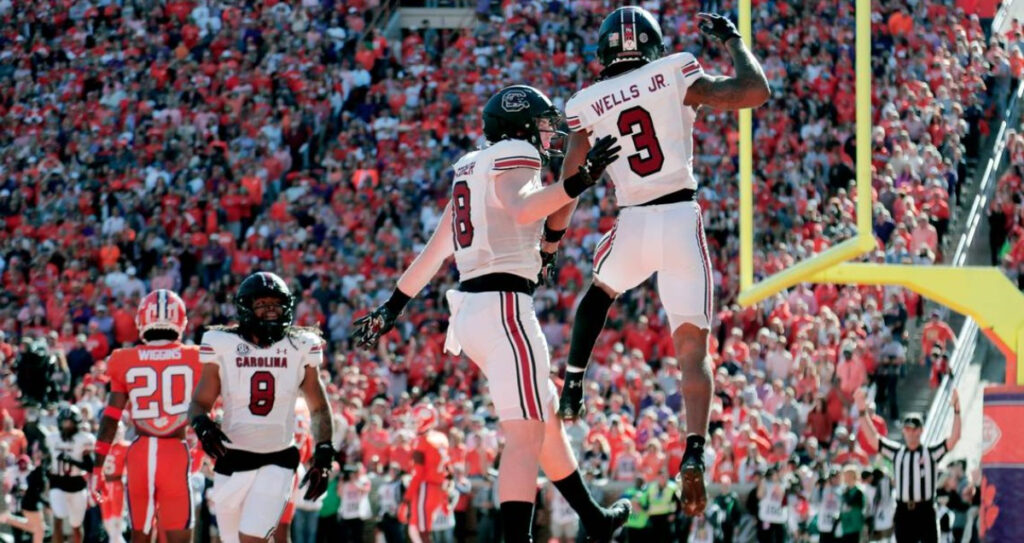 Antwane Wells Jr. and the South Carolina Gamecocks pulled off a huge upset over Clemson and helped 1 sports bettor win over $180,000!

We're happy to report that our ever-so-lovable Crazy Bets column is officially back! It's always fun to see which sports bettors cashed out in a big way and we'll be doing that every Monday for the foreseeable future.

Thanksgiving weekend was great for a few sports bettors that cashed some unlikely tickets! Here are the top 3 crazy bets that cashed from NFL Week 12 & CFB Week 13. You can bet (pun intended) that all 3 of these people are even more thankful than normal heading into this week!

Major Wager on the Gamecocks 🚨

One of the biggest rivalries in college football is South Carolina vs. Clemson and one sports bettor at BetMGM Sportsbook cashed an insanely profitable ticket on it. Just how confident was this bettor in the Gamecocks? He took them on the moneyline at +450 instead of the point spread, which was gutsy considering that South Carolina was a 14-point underdog to #8 Clemson.

Things were looking bleak for this wager in the first quarter as Clemson darted out to a 2 touchdown lead. South Carolina came roaring back but still trailed 23-14 at halftime.

Someone at DraftKings Sportsbook was a big believer in Joe Burrow and the Cincinnati Bengals! This bettor placed a $33,000 wager on Cincy to beat Tennessee straight up on the moneyline. As you might expect, this game was a nail-biter.

The Titans had a touchdown lead late in the first half but Samaje Perine tied the game just before the break with a 7-yard touchdown run. Cincy took the lead late in the 3rd quarter but Tennessee tied in just a few minutes later.

Burrow found Tee Higgins in the end zone for a 27-yard touchdown pass to give the Bengals the lead for good. The Titans had a chance late but sabotaged themselves with a stupid penalty on a field goal attempt. This Bengals bettor wasn't complaining, because that helped him get a payout of $58,000!

This bettor nailed a TD parlay in the first half 🤑

FanDuel Sportsbook has made the Same Game Parlay incredibly popular among its patrons. One sports bettor will forever be grateful for same game parlays, especially this one that turned a small dollar bet into a pretty significant chunk of change!

This betting wizard placed a 4-leg Anytime TD parlay that ended up cashing in the first half! How cool is that? He probably spent the whole second half smoking a victory cigar (at least that's what I would've done).

Miles Sanders got the party started with a 15-yard touchdown run early in the first quarter. Randall Cobb hauled in an 11-yard touchdown pass reception from Aaron Rodgers just before the first stanza came to a close.

Rodgers found Aaron Jones with a 23-yard touchdown pass to cash the third leg of this insane parlay. All that was left was Quez Watkins and thankfully he did not disappoint. He caught a 30-yard touchdown pass from Jalen Hurts with just 13 seconds left in the first half.