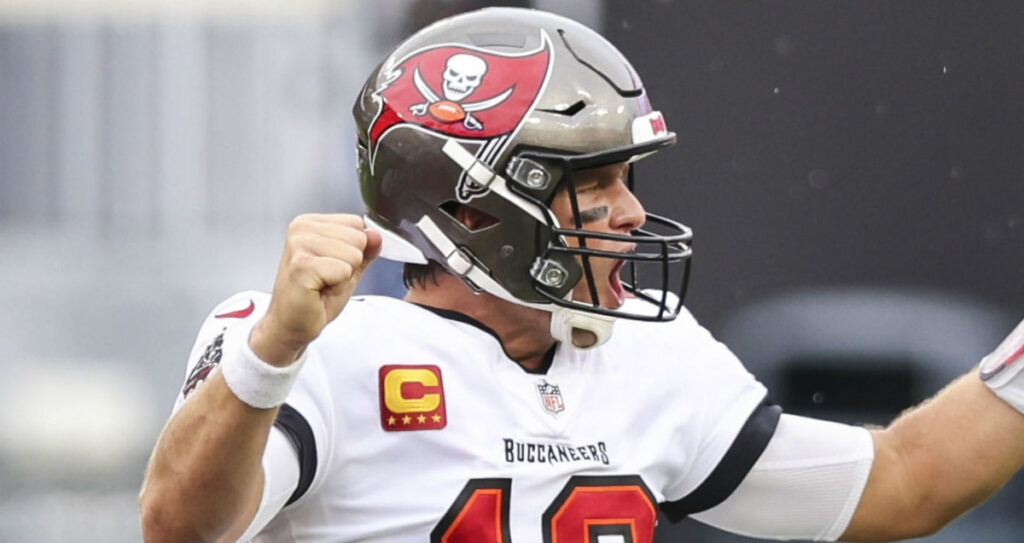 One of the crazy bets from the NFL Week 17 card was on Tom Brady and the Bucs.

Happy Monday and Happy New Year, fellow sports bettors! It's that ever-so-lovable time of the week when we check out the crazy bets and bad beats from the prior NFL weekend.

As usual, lots of bettors enjoyed gloriously large paydays at some of the top online sportsbooks in the country. Unfortunately, lots of gamblers also suffered some indescribably bad beats.

No matter what side you ended up on yesterday, we rejoice with you in victory and sympathize with you in defeat. Without further delay, here are the crazy bets and bad beats from NFL Week 17.

It's no secret that Tom Brady hasn't had the best season. That being said, the GOAT knows how to win football games, and one bettor at DraftKings was willing to back Brady and Tampa Bay in a big way. They ponied up $140,000 on the Bucs to beat the Panthers straight up.

Things looked bleak right out of the gate, as Carolina quickly took a 14-0 lead thanks to 2 TD passes from Sam Darnold. Things stayed that way until Tampa Bay finally woke up with about 2 minutes to go in the first half. Brady hit Mike Evans with a 63-yard TD pass, and Ryan Succop hit a 22-yard field goal to cut the Panthers' lead to 4 at the break.

The third quarter brought no drama and no scoring. However, Carolina scored early in the fourth stanza to take a 21-10 lead. At this point, our crazy bettor at DraftKings had to have been more than a bit concerned.

That's when Mr. Brady started rallying the troops. He hit Evans for back-to-back TD passes to give Tampa Bay its first lead of the day at 24-21. The Bucs never looked back, and this gambler at DraftKings walked away with a net profit of nearly $78,000! Talk about starting the New Year off on the right foot!

The Dolphins (+3) with the backdoor cover!!!!pic.twitter.com/o48gkYPWJ6

Our first bad beat of 2023 came in the AFC East rivalry game between the Patriots and the Dolphins. The Pats were favored by three points, and the total ended up going off at 41.5 points.

New England took the lead late in the third quarter thanks to a Kyle Dugger pick-six. Unfortunately for Pats backers, Nick Folk missed the extra point to only give New England a two-point lead.

Things looked fantastic for both Pats bettors and Under bettors when Mac Jones hit Jakobi Meyers for a 1-yard touchdown with 4:37 left in the game. Folk made the extra point this time to put the Patriots up by 9.

That's when the wheels fell off. Young Dolphins QB Skylar Thompson led the Fish on a 9-play 61-yard drive that only took 1:28 off the clock. Thompson found Mike Gesicki in the end zone from 4 yards out to bring Miami to within two points.

Though that play had no impact on the game's outcome, it burned everyone that laid the points with New England. It also hurt the wallet of all of the folks that took the Under. In the world of sports betting, no score is meaningless!

Caesars Sportsbook isn't afraid to take big bets, and one sports bettor laid it all on the line with the Pittsburgh Steelers on Sunday Night Football. They placed a wager of more than $263,000 on the Steelers on the +1.5 point spread over the Ravens.

You can definitely understand this bettor's logic, especially since star QB Lamar Jackson was still out for Baltimore. That being said, this AFC North rivalry is always a close battle. However, with the Ravens already sitting pretty for a playoff spot, most folks agreed that this game meant more to the Steelers.

Chris Boswell put Pittsburgh on top 3-0 midway through the first quarter. Unfortunately for our crazy bettor at Caesars, Baltimore scored 10 straight points to take a 7-point lead at the half.

Justin Tucker extended the Ravens' lead to 10 points with 9:31 to go in the third quarter. Though things looked bleak for Pittsburgh, Kenny Pickett started heating up late in the game. He led the Steelers on 2 field goal drives to cut the lead to 4.

Still trailing by 4 late in the game, our crazy bettor probably didn't have any fingernails left. Thankfully, Pickett hit Najee Harris for a 10-yard touchdown with only 56 seconds left in the game. That play kept the Steelers in the playoff race and sent a certain someone home with a gigantic payday!