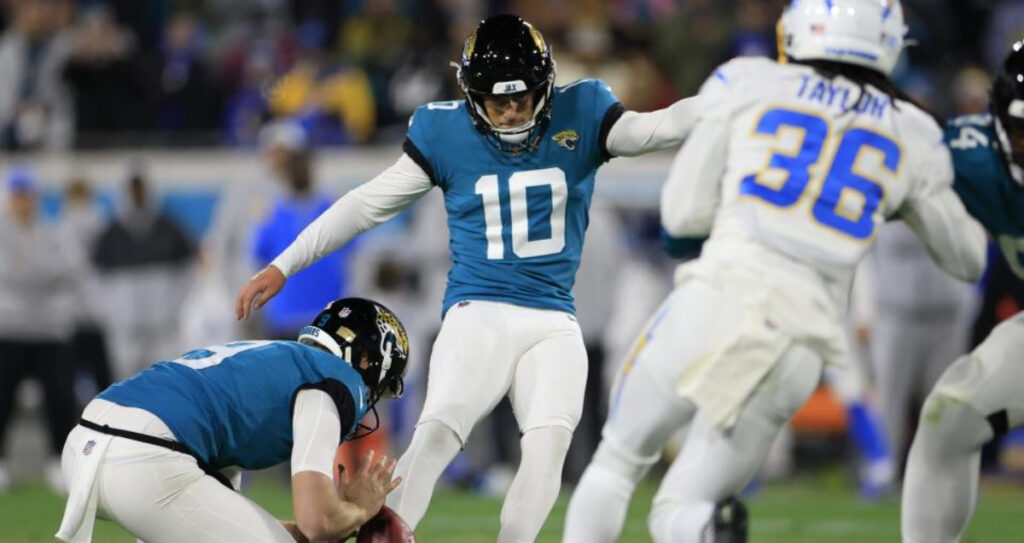 Riley Patterson kicked the game winning field goal in what was both a crazy bet and a bad beat during NFL Wild Card Weekend.

WOW! What an entertaining 3-day stretch we just came off of in the NFL! Nothing was crazier than the Jaguars' insane comeback over the Chargers on Saturday night. The Giants also got the better of the Vikings in what was a small upset.

When betting on the NFL, the margin of victory is small. That's why there are crazy bets & bad beats on a regular basis. Check out one of each from NFL Wild Card Weekend right here.

Most sharp sports investors will tell you to be careful betting on all of the most popular teams (Yankees, Lakers, Cowboys, Alabama). While that theory may have a ton of validity, it didn't stop this sports bettor at Caesars Sportsbook in Nevada from placing a huge $200,000 parlay on the Lakers and Cowboys to both win straight up.

The Dallas part of this parlay was a no-sweat, rocking chair winner. The Cowboys jumped out to a fast start and never looked back. They led 18-0 at the half over Tom Brady and the Bucs.

The game wasn't actually as close as the 31-14 final score. Dallas led 31-6 before a late garbage-time TD pass from Brady to tight end Cameron Brate. Dak Prescott led the way for the 'Boys by throwing 4 touchdowns and running for another.

As for the Lakers part of the parlay, that was a bit trickier. Los Angeles only led by 2 points at the end of the first quarter, and our crazy bettor at Caesars was probably a little bit nervous.

Thankfully for him, LeBron James and company started to take the game over and padded the lead to 12 at the break. It wasn't an easy ride, however, as the Rockets cut the lead to within 4 at the end of the third stanza.

King James took over by scoring 21 points in the 4th quarter alone to put things out of reach. That resulted in an 8-point win for the Lakers and a $98K win for our crazy parlay bettor at Caesars.

This may qualify as the bad beat of the year, if not the decade! A sports bettor at DraftKings thought that the Chargers were a lock to beat the Jags when they got out to a strong 27-0 lead on Saturday night. He placed a live bet of $1.4 million on the Chargers' moneyline at the juicy price of -12500.

If it came through, the bet would only win $11,200 because of the substantial juice. Nevertheless, with the huge lead and the fact that Trevor Lawrence had just thrown his 4th interception of the night, this bettor probably thought this was free money. Unfortunately, there are no locks in sports betting!

Lawrence got the Jags on the board with only 24 seconds left in the half. He threw a 9-yard touchdown pass to Evan Engram to cut the lead to 20 and exorcise some demons going into the locker room. Even still, this bettor at DraftKings probably thought his huge bet was safe.

Jacksonville continued their unlikely comeback in the third quarter by cutting the lead down to 10. Lawrence hit Zay Jones for a 39-yard touchdown, but they missed the two-point conversion attempt.

The fourth quarter was all Jacksonville, as they continued to wear down a tired Chargers defense. Christian Kirk caught a 9-yard touchdown from Lawrence, who then sneaked in a 2-point conversion after a careless Los Angeles penalty.

The Jaguars' defense got a critical stop to give the ball back to the offense with 3:09 left in the game. Lawrence engineered a 10-play drive that was capped by a 25-yard run by Travis Etienne on 4th and 1. That play set up the game-winning field goal by Riley Patterson as time expired.

The comeback by Jacksonville was the 3rd largest playoff comeback in NFL history. It was also one of the worst beats of all time for a certain sports bettor at DraftKings. We're betting he'll probably never bet on Brandon Staley again.

We'll be back next week with crazy bets and bad beats from the Divisional Round. Thanks for reading!