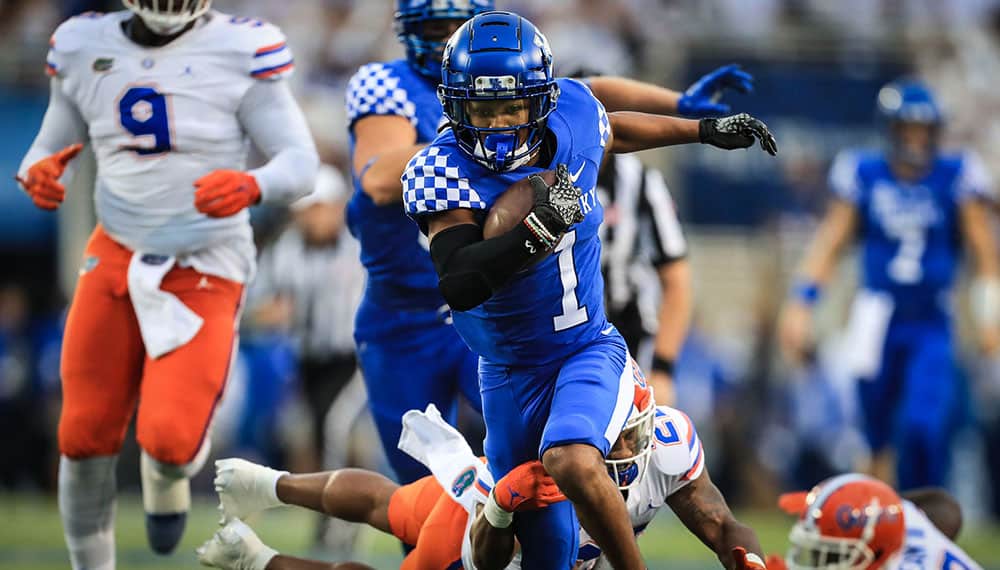 Happy Monday fellow sports investors! It’s our favorite time of the week. Time to grab a cup of coffee and look at what crazy bets cashed from the football world this past weekend.

There were upsets everywhere, and if you had what it takes to call some of them, you could have cashed big. We saw tickets on Kentucky over Florida, Mississippi State over Texas A&M, and the Jets over the Titans. Here are some of the craziest bets that cashed last weekend.

New players that sign up using the promo code BVFBMULTI1 will receive a $200 bonus on their first $20 NFL or CFB wager. Be sure to follow these steps to lock in this bonus:

We’re guessing that this FanDuel bettor was cursing the majority of Thursday Night Football. This gambler placed a 240K bet on the Bengals moneyline thinking there was no way they’d lose to the hapless Jaguars. Imagine how much he was sweating when Cincy was trailing 14-0 at the half.

Luckily, Zac Taylor rallied the troops and Joe Burrow got the Bengals offense clicking in the second half. We know that this bettor breathed a huge sigh of relief when Bengals kicker Evan McPherson nailed the game-winning field goal as time expired, much to the chagrin of Jags coach Urban Meyer. The result was a nice fat $72K payday!

A bettor @FDSportsbook tonight bet $240,000 on the Bengals to beat the Jaguars.

Score at the half.

This gambler at Caesars knew that Michigan’s running game was going to be too much for Wisconsin to handle. He confidently wagered $200K on the Wolverines to win at the nice moneyline price of +110 odds. The game was tight at the half with Big Blue clinging to a three-point lead.

Everything changed in the second half when Michigan’s swarming pass rush hit Wisconsin QB Graham Mertz and knocked him out of the game. The Wolverines took complete control of the game as they outscored the Badgers 25-7 in the second half en route to a 38-17 blowout win. What a nice rocking chair $220K win for this Caesars sports bettor! Nice work!

The Cincinnati Bearcats made two gamblers at Caesars a boatload of cash with their iconic victory over Notre Dame on Saturday afternoon. One bettor wagered $230K on Cincy for the first half on the money line (-115). The other bettor wagered $220K on the full game spread of Cincy (-2).

The first half bettor had nothing to worry about, as the Bearcats dominated the Irish the entire half. Cincy cashed in on several Notre Dame turnovers and had a commanding 17-0 lead at the break. This bettor walked away $200K richer!

The full game Cincy bettor had more of a sweat, especially when Notre Dame cut the lead to 17-13 with just over eight minutes left in the fourth quarter. Luckily for him though, Desmond Ridder responded with a six-yard rushing touchdown that put the game out of reach. This guy also brought home a cool $200K.

WOW! What a shocker this was! Did anyone see the #10 Gators losing to Kentucky? Apparently, this one sports bettor at Caesars did as he bet $5K on the Wildcats at the moneyline price of +250.

Florida led 10-7 in the third quarter but everything changed when Kentucky blocked a field goal and ran it back 78 yards for a touchdown! Florida came close to tying it in the closing seconds but the Wildcats defense pulled off a goal-line stand! It was the first time Kentucky has beat Florida in Lexington since 1986!

We know $5K doesn’t sound like a huge bet compared to some of the others on our list, but this was this bettor’s first wager at Caesars in Arizona! Geeeez! The bet paid out $13K! Now that’s a great way to start at a new sportsbook! Congrats!

Contrary to popular belief, the big favorites do at times cover the spread in the NFL. This high rolling sports bettor at Caesars bet $500K on the Buffalo Bills (-16.5) over the Houston Texans.

You have to hand it to this bettor for using simple logic. After all, the Bills are one of the best teams in the league and the Texans are one of the worst! What was the result?

The biggest bet at #CaesarsSportsbook of the Week 4 slate just came in on the biggest favorite of the season so far:
$500,000 on the Bills -16.5 (-110) against the Texans.#BetLikeACaesar

One FanDuel Sportsbook bettor is feeling pretty good heading into Monday Night Football with not one, but two six-leg parlays live. Both parlays included three underdog moneylines (Jets, Giants, Colts), as well as the Packers' and Bucs' moneylines. The best part of these two bets? One parlay includes the Raiders moneyline and the other includes the Chargers moneyline. Will he hedge against a tie?