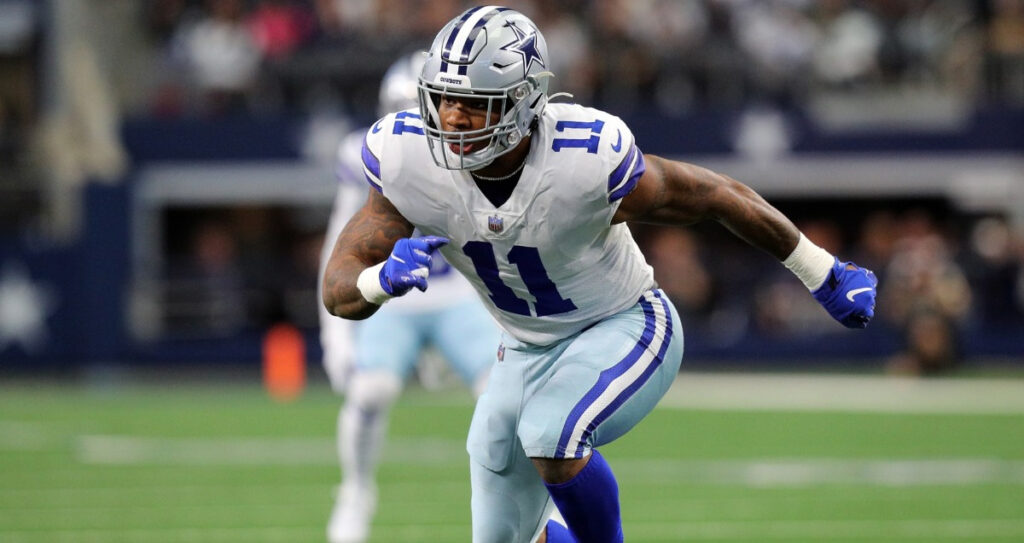 One of our 3 PrizePicks props for Thursday Night Football involves Micah Parsons.

It’s difficult to picture a Thursday Night Football matchup that pits two teams against one another who are headed in more opposite directions. The Dallas Cowboys head to Nashville this week. They've won five of their last six games and have clinched the top wild-card spot in the NFC.

Dallas is still holding out hope they can win the NFC East. The Tennessee Titans have lost five in a row to drop them out of the division lead in the AFC South and reduce their playoff chances to a slim probability.

The Cowboys enter this TNF contest as 10-point road favorites with a low total of 40.5 points. Dallas is 1-2 ATS as a double-digit favorite this season and has not had a game finish under 41 points since October 23.

The Titans are 1-1 ATS as double-digit dogs this season and have gone under the total in 10 of 15 games in 2022. Ahead of their midweek matchup, we’ve dug into some PrizePicks prop opportunities and present three best bets for Cowboys-Titans on Thursday Night Football.

The combination of a Titans’ defense with half its starters on the Week 17 injury report, including Jeffrey Simmons, Denico Autry, and Amani Hooker, with Tony Pollard not practicing this week, should add up to a monster workload for Zeke.

Elliott has seen 15+ carries in seven straight games despite Pollard being involved in most of those contests and should break into the 20s if Pollard cannot go on Thursday night.

The Ohio State product has scored ten touchdowns on the ground in those seven games where he’s seen a role that Cowboys fans are more familiar with. Despite the Titans’ defense ranking in the top two over the season against the run, we project this combination of injuries to pave the way for Zeke’s continued stretch of recent dominance.

We’re trying to envision the Titans moving the ball against this 6th-ranked Cowboys’ scoring defense, but do not see this going well for Tennessee.

Malik Willis, who will likely start, has not thrown for 100 yards in an NFL game and was sacked four times while throwing two interceptions in Tennessee’s surprising loss to Houston last week.

Dallas averages nearly a sack per game more than the Titans this season, and Parsons is the player that Tennessee will be concerned with blocking. Interestingly, he has just one sack in his last four games and is dealing with a left-hand issue this week.

The Titans will lean heavily on Derrick Henry but will be forced to throw at times to convert third downs and move the chains. Parsons will capitalize on at least one of these opportunities for a sack, and we expect him to rack up at least 5 total tackles.

The Titans’ kicker is 27th in the NFL in field goal percentage on the season and has not connected on a kick longer than 48 yards in 2022.

With Tennessee being offered as significant underdogs in a game with a low total, the sportsbooks expect the Cowboys to be the only team doing the scoring on Thursday night, and we don’t disagree.

Titans coach Mike Vrabel will be less likely to attempt field goals in opposing territory if his team is down big. He cannot afford to continue to lose games if they want to return to the postseason a year after being the #1 seed in the AFC. Take Bullock’s under for Thursday night.

A ton of sharp money hit this prop in the betting markets earlier today, and it's easy to see why. Because of all the Titans' injuries, the Cowboys have now ballooned to a 14-point favorite in this contest.

We can easily see Dallas building a big lead and then resting Dak for the majority of the second half. If the game plays out that way, this prop will likely hit with ease. Even if Dak plays for most of the game, look for the Cowboys to pound the rock.

Kellen Moore only calls pass plays at a 51.54% clip, which ranks 26th in the league. That plays right into our hands with this Under. Good luck!