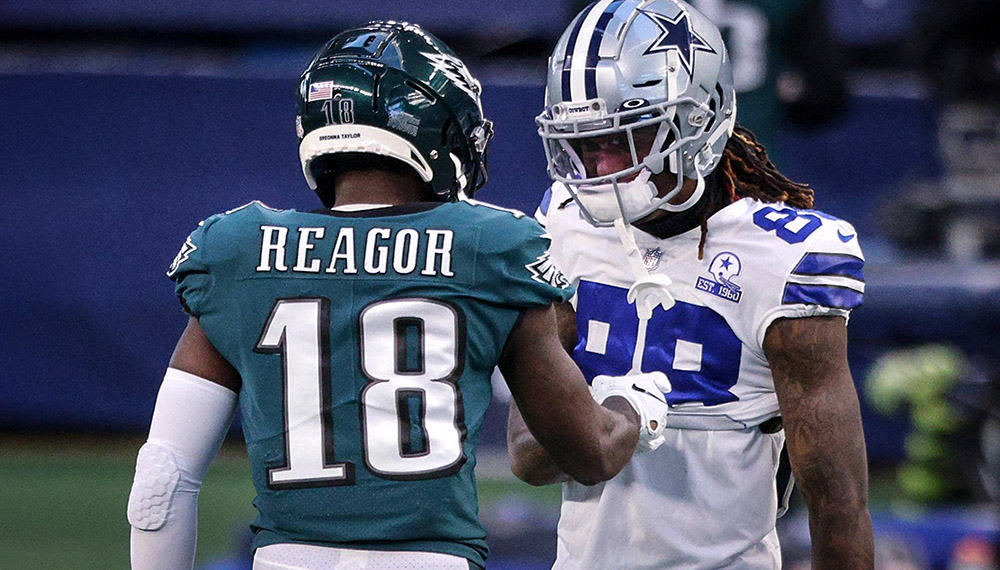 The first-ever Week 18 NFL slate kicks off with a pair of games on Saturday. In the nightcap, the Philadelphia Eagles will host the Dallas Cowboys. The Cowboys blew out the Eagles way back in Week 3 on Monday Night Football to the tune of 41-21.

We went 7-3 with our prop bets last week so we’ll try to keep the money train a-rollin’ in Week 18. The last week of the NFL regular season is always a difficult beast to handicap any kind of side or total.

However, with a bit of due diligence, you can usually find a few profitable prop bets. Here are the five best prop bets for this Cowboys at Eagles matchup.

We wanted to play Jalen Hurts in this spot but Eagles head coach Nick Sirianni still hasn’t decided if he’s even going to let Hurts play in this game. Starting RB Miles Sanders has been officially ruled out for this game as well.

That leaves us with Kenneth Gainwell, who we think could have a big day against an average Cowboys rush defense. The former Memphis Tigers star has put together a solid rookie campaign, even though he’s had to split carries with Sanders and Corey Clement. Gainwell has scored five total touchdowns this season and we see him getting number six in this game.

The Dallas defense gives up 4.5 yards per rush (24th) so Gainwell should be able to find some open holes to run through. Also, the Cowboys are dealing with Covid issues on the defensive side of the ball.

Defensive Rookie of the Year candidate Micah Parsons is on the Covid list and won’t even make the trip to Philadelphia. That makes us like this Gainwell anytime TD prop even more.

This may be a meaningless game for both teams but it’s a pretty big game for Jalen Reagor. The former first-round draft pick just has not lived up to expectations during his first two seasons in Philly.

Reagor was booed by Eagles fans after a costly drop last week against the Washington Football Team. Unfortunately, the former TCU star has had an issue with drops dating back to last year. Teammate Derek Barnett has even told Reagor to “embrace” the booing from the hometown fans.

This may be the game where Reagor puts together a good performance. He’s caught 31 passes for 280 yards and 2 TDs this season and he would love to add to that total to earn some redemption with Eagles fans.

Reagor could see more playing time since Sirianni will either rest his starters or play them on a limited basis. This makes us think there is some good value in the +400 number.

Like we mentioned above, Week 18 is a different animal to handicap. We probably won’t know which starters are playing in this game until it gets close to kickoff. Some coaches will let their starters play a quarter or two before unloading the bench.

Yes, we know that Noah Brown hasn’t played that much this season. Yes, we know that CeeDee Lamb and Amari Cooper are the easier bets to make in this spot. However, we think that Brown will see an ample amount of playing time in this game, especially in the second half.

If Brown is on the field more for this game, we like his chances of scoring a touchdown. The former Ohio State star has good size (6-2, 225) and is a great candidate for corner fade routes down around the goal line. The +600 odds are just too juicy to pass up.

Cowboys Team Touchdowns UNDER 2.5 (+110 at DraftKings)

Cowboys head coach Mike McCarthy has stated that he intends to play his starters in this game. Jerry Jones has also echoed that his team will “play to win the game” (say it in Herm Edwards voice LOL). Even with all that being said, we still believe that McCarthy will pull most of his starters in the second half of this game.

It doesn’t make sense to risk any starters to injury in a game that is virtually meaningless. Both of these teams have already punched their playoff tickets and neither can move up in seeding without outside help from other teams.

We see this game playing out much like a boring preseason game. The starters will get a few reps and then the backups will take over. If that’s the case, we don’t see the Cowboys scoring more than two touchdowns in this game.

After Dak Prescott has a couple of good drives, we think McCarthy will toss the keys to Cooper Rush for the rest of the game. That’s when the game plan should get very vanilla with lots of running plays to shorten the game.

Total Touchdowns Scored for Both Teams UNDER 4.5 (+112 at PointsBet)

Here’s a nice line that we found over at FanDuel Sportsbook. This game total is sitting at 43 at most online sportsbooks after opening at 41 earlier in the week. The books are expecting a low-scoring game.

We agree with that assessment, as we don’t see many offensive fireworks in this game. We are betting that the Cowboys’ starters will only play a limited number of snaps. We also have a gut feeling that Sirianni may rest a few of his top guys like Jalen Hurts and Devonta Smith.

There is some good value in this prop bet, as our numbers say that there’s at least a 50% chance that this game has four touchdowns or less. Take the under! Best of luck with all your NFL Week 18 bets!