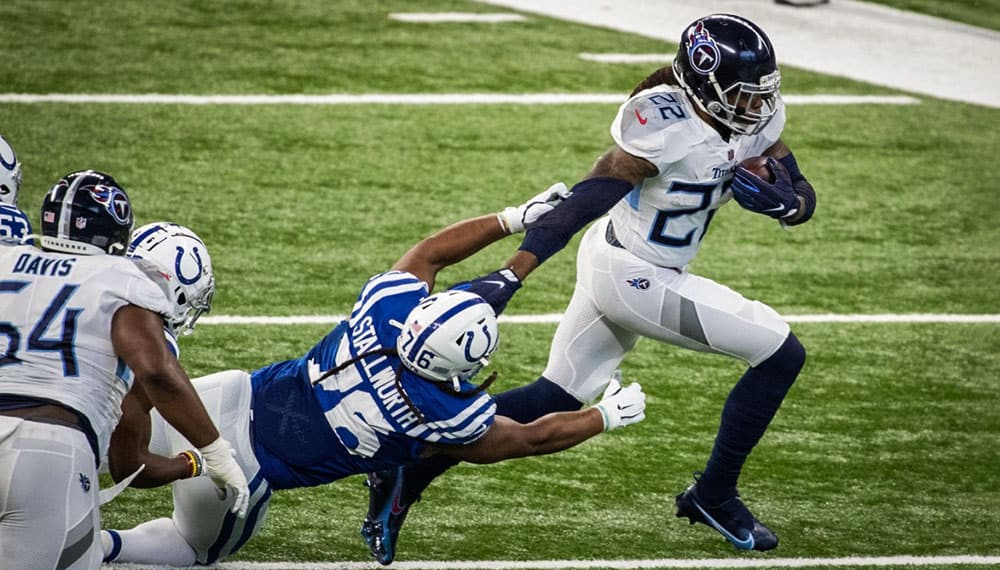 Colts at Titans - Betting Guide and Our Best Bet

In an NFL slate full of marquee matchups, the Indianapolis Colts at the Tennessee Titans looks like a game worth keeping an eye on. Tennessee entered 2021 with high hopes, and as bad as week 1 was, coming out of playing Arizona and Seattle in weeks 1 and 2 at 1-1 feels like a win.

The Colts, on the other hand, are in a world of hurt thanks in large part to injuries. We knew coming into the season that Rock Ya-Sin was an issue, and without Xavier Rhodes, this pass defense has been awful. Through two weeks (albeit Stafford and Wilson) the Colts have surrendered a QB rating of 132, which is 31st in the NFL.

In this article, we will break down exactly how we expect this game to play out, what the best odds available are for each team, and what our betting strategy for this matchup is.

Current Odds and Best Spread Available for Both Titans and Colts

There is a lot to unpack if you are looking at the line move of Sunday night’s Colts – Titans matchup. The preseason line made the Titans two-point favorites, during last week we’ve seen a Titans –3 hung by the bookmakers moving the line towards Tennessee due to multiple injuries on the Colts side.

The spread reopened at six points this Monday morning after Carson Wentz got injured in last Sunday’s Colts loss (while the Titans won their matchup in overtime against the Seahawks). Those sixes are pretty much gone now with early betting action favoring the road dog and we are left with a spread around five points.

At the time of posting this article, BetRivers had the best odds on the Colts at +5.5 (-109), while PointsBet's -5 (-115) was the best number available for the Titans. The odds below are live and display the sportsbook with the best spread (or lowest juice) available for each wager.

This spread at five is pretty much in a no man's land while we wait for the status of Carson Wentz. Wentz left last Sunday’s game with an ankle injury after going for 20/31 in the game for 247 yards. The veteran QB was forced to watch from the sidelines as his replacement, Jacob Easton threw a pick on his first drive, essentially sealing the fate of Indianapolis.

What to Watch for from the Colts in Week 3

Head coach Frank Reich said that Wentz rolled his ankle pretty badly, which is especially concerning knowing the QB’s history of foot injuries. We would expect the spread to move back closer to three points if Wentz can give it a go, and we will likely see the number move to seven or more if the Colts are forced to start Easton.

The Colts receiving duo of Michael Pittman Jr. and Zach Pascal played decent offensive football against the Rams, with Pittman having more success facing 11 targets on 60 snaps. Pittman finished with a 26% target share and eight receptions. Besides the team’s top two WRs, tight end Jack Doyle also had a strong day with five catches and 64 yards averaging 12.8 yards per reception.

The Colts ended up covering the spread in a close game against the highly-rated Rams and while the team has been capable offensively so far this season, the defense has been less than stellar through two weeks allowing 14.4 yards per reception to the Seattle & LA.

What to Watch for from the Titans in Week 3

Last season’s 7th ranked defense (by DVOA) could get a breather in Week 3 as Tennessee’s pass offense hasn’t been strong at all through the 2021 season.

Titans QB Ryan Tannehill has a 65% completion rate through two weeks with a 7.4-yard average depth of target and his receivers are only averaging 11.5 yards per reception reaching first downs on 57% of receptions. While all of these stats are close to league average, they represent a step back from the offensive capabilities of the Rams and Seahawks, and of course, the 2020 Titans.

Most of Tennessee’s success on the offensive end came through the run. In the winning effort over the Seahawks, Derrick Henry had 35 carries, 182 rushing yards, and three touchdowns and the Titans are averaging 4.8 yards per carry through the young season.

If Carson Wentz can give it a go, we will take the Colts with the points! With their defensive average of 14.7 yards allowed per reception, the Titans will be the worst defense Indianapolis has faced so far this year and the Colts should have enough on the defensive end to slow Derrick Henry down.

Make sure to wait for the practice reports before placing your wager, as all bets are off if Jacob Easton is Indianapolis’s starting QB! If Wentz is confirmed out, jump on the Titans (-5.5) number before it moves to -7.5. While Easton is capable of moving the ball in this offense, we want no part of a QB making his first NFL start on the road.