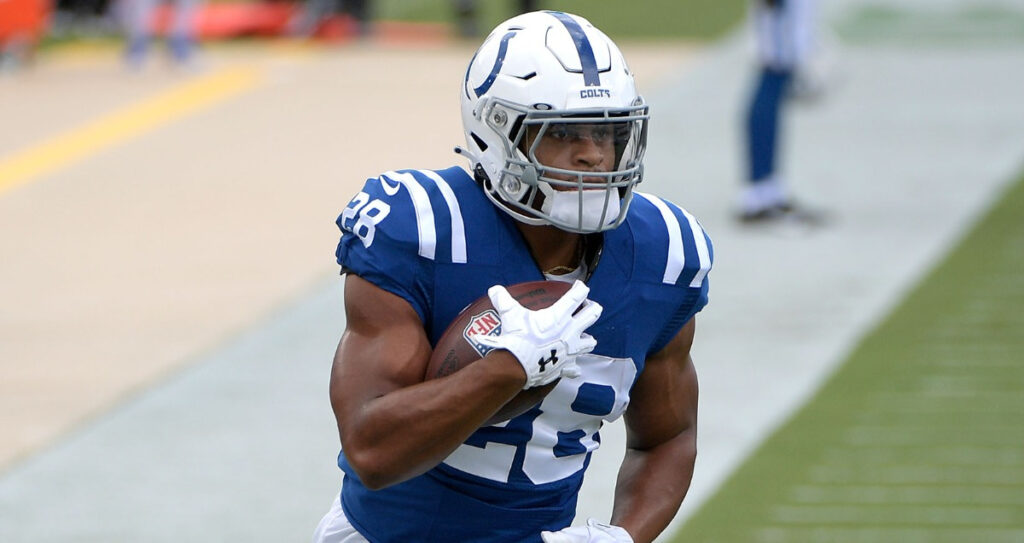 We like Jonathan Taylor to go Over 75.5 rushing yards as 1 of our 3 player props for Sunday Night Football.

After last week’s 73-point Sunday Night Football scoring display we are faced with a potentially one-sided matchup between two teams heading in different directions for Week 13. Dallas will host Indianapolis at 11-point favorites with a total set at 43.5.

The Cowboys have won four of their last five games and the Colts have one just one of their last five. Possibly the most interesting aspect of this game for all involved is the matchup between the terrifying Cowboys’ pass rush led by All-Pro Micah Parsons against a Colts’ team that cannot protect their quarterback on a good week. This one could get out of hand early if it plays out as expected.

We had one thing right last week in that Aaron Rodgers threw an interception before Green Bay could even go three-and-out on their first possession. Our two losing plays in Week 12’s SNF game came on Aaron Jones’ poor rushing performance and Jalen Hurts deciding to run for four more yards than he threw for to bury our passing yard prop.
Let’s head into Week 13’s edition of player prop best bets for Sunday Night Football.

It should come as no shock that we’re fading Matt Ryan in a game where he’ll likely be on the ground at least 5-10 times. The Cowboys pressure the quarterback at the highest rate in the NFL at over 30% of dropbacks and lead the league in sacks by a wide margin.

Indianapolis is dead last in sacks allowed in 2022, and also boasts a -10 turnover margin through 12 games. Needless to say, Jeff Saturday has his hands full with this bunch!

As a result of their pass rush and talent in the secondary, Dallas allows a league-low 177 passing yards per game. It will be a long night for Ryan and we’ll fade him getting to this total.

Both of Lamb’s 100-yard receiving performances this season have come in the last three games since Dak Prescott returned from injury. We predict that Prescott will continue to look his way, but the Colts’ defense is the key factor for this play.

Indy is 5th-best in the NFL in passing defense and has allowed the 3rd-fewest receiving yards to wide receivers among all teams in 2022. With the recent surge from Dalton Schultz and the Cowboys’ tight ends, we expect Lamb to have just a modest performance on Sunday night.

The Colts will be forced to run the football whether the game dictates it or not. Taylor has gotten 80 carries in his last four games and has ground out 76 or more yards in each of those contests. That stretch included games against Washington and Philadelphia, who have been tough matchups for opposing ballcarriers in 2022.

Taylor is much fresher at this point in the season compared to 2021, amassing just 171 carries through nine games compared to his 332 total rushes last season. We project Taylor to be the focal point of the Colts' game plan in an attempt to run the clock as much as possible and keep the ball away from Prescott and the Cowboys.