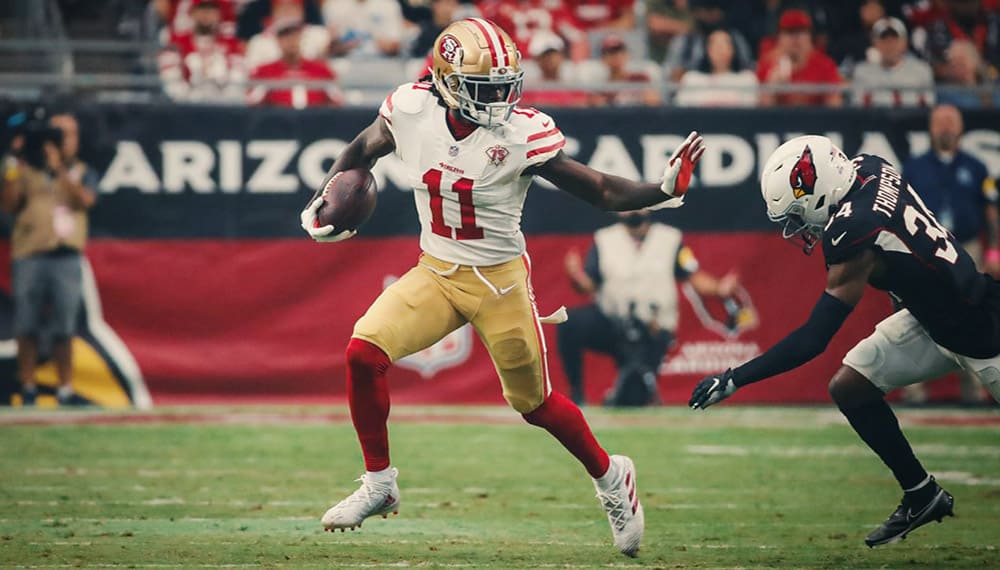 The Week 7 Sunday Night Football matchup is an inter-conference showdown between the 2-4 Colts and the 2-3 49ers. Both squads have had promising signs at different points in the season, but could use this primetime win on their way back to a .500 record.

In this betting guide we will help you find the best number available for both the Colts and 49ers, as well as the total. We will also break down what we expect to see from both teams, our pick for best bets, and two prop bets that stand out.

Best Odds Available for Both Sides of this SNF Matchup

San Francisco opened up as a 5.5-point favorite on the betting market, with immediate Indianapolis money flowing in. This sharp action moved the spread down to a 4 and we are seeing a solid two-way betting action on most books, with both teams attracting big bets.

Plenty of early money came in on under for this matchup, moving it down to as low as 43.5 from the opening number of 45.5. It currently sits at 44 across the board. Looking at the best odds available for each side, Colts bettors are getting the best line at FanDuel Sportsbook while 49ers bettors should be looking at the current PointsBet -4 number.

What to Expect from the Colts Sunday Night

The Colts faced the Houston Texans in Week 6 and came away with an easy W surrendering only 3 total points. We have to give credit to the Indianapolis defense that stepped up in a big way. The team also showcased its elite offensive line that has been bullying opposing lineups pretty consistently for weeks now.

Carson Wentz is coming off a 223-yard performance completing 11 of 20 passes for two touchdowns. Wentz had an insanely high, 13.2-yard average depth of target helped by a monster, 51-yard TD pass early in the game.

Indianapolis’ QB sits with an 80+ PFF grade after six weeks in which is certainly a bounce-back year for the Super Bowl champion. Wentz even earned analyst site PFF’s offensive player of the week award for his Week 6 performance.

We also have to praise Indianapolis’s skill players. The Colts running backs are averaging an impressive 4.7 yards per carry (up from 4.1 yards in 2020) led by Jonathan Taylor, who is fresh off a 145-yard performance. The RB trio of Taylor-Hines and Mack has been pretty impressive so far and with the 49ers having a bit more issues stopping the run this year, we could see the Colts having success running the ball this upcoming weekend.

Indianapolis’ receivers have been exactly league-average a year ago averaging 11.3 yards per reception. Six weeks in, the Colts WR-core is averaging over 12.5 yards per reception, making this one of the more upper echelon offenses of the league. With T.Y. Hilton back off the injury list, we are excited for this band of pass-catchers going forward.

In his first game back from the injured reserve, Hilton led the team both in receptions and receiving yards. The duo of Hilton and Michael Pittman Jr. is as exciting as you can get and tight end Mo Alie-Cox has also been one of the most productive players in the TE position.

What to Expect from the 49ers Sunday Night

San Francisco hobbled into its Week 6 bye with multiple serious injuries, but the early signs are promising for Kyle Shanahan’s boys with many key pieces returning after this much-needed rest.

The 49ers narrowly lost to the league-leading 6-0 Arizona Cardinals before their bye week in Trey Lance’s first career start. Lance showcased both his legs and arms in the debut holding a big-time throw rate of above 10% while also rushing for 89 yards.

Based on early practice reports Lance suffered a knee injury in Week 5 and did not practice this Monday, so all signs point to a Jimmy G start in Week 7 as San Francisco’s QB #1 was throwing without any issues in practice.

With RB Elijah Mitchell already returning from injury for San Francisco and both Deebo Samuel and Brandon Aiyuk healthy, the 49ers don’t really have too many key offensive starters left on the IR besides TE George Kittle and kicker Robbie Gould.

Our power rankings make this game closer to 3 points, so we will take the Colts against the spread getting over a field goal.

San Francisco hasn’t been playing that well so far this year and the Colts are playing their best football in the last three weeks with their loss coming in overtime against Baltimore (in a game they could have easily won). We would also lean towards the over with the total sitting at 44. 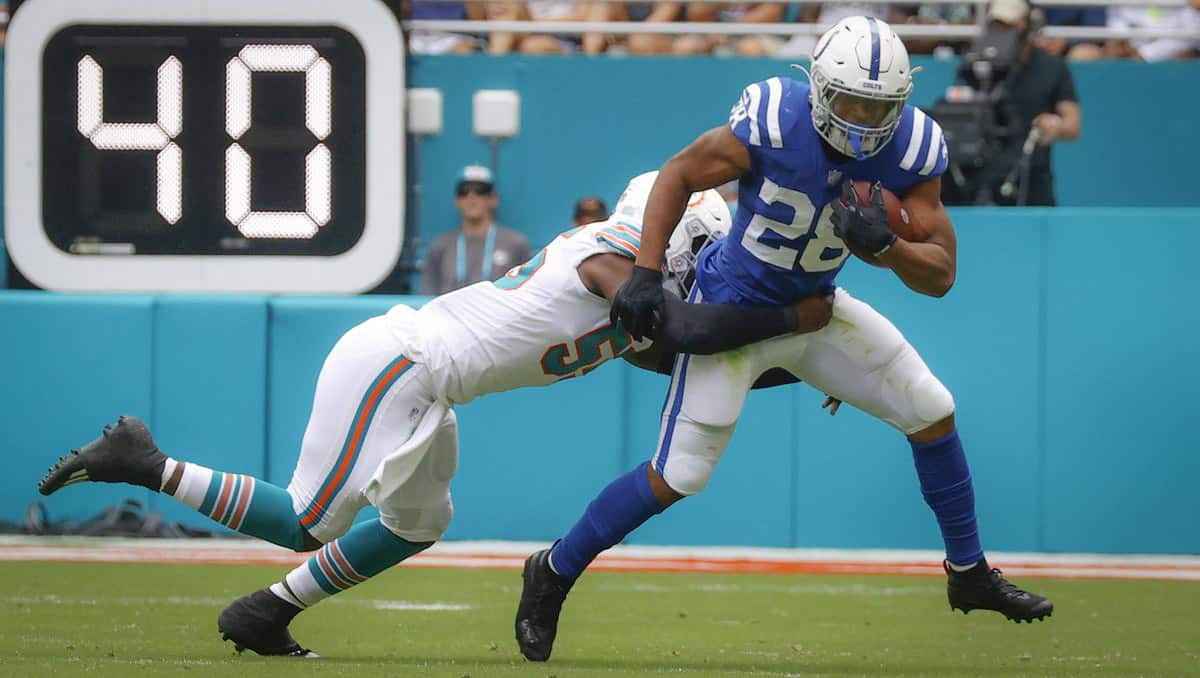 Our Favorite Player Prop Bets for Colts at 49ers

We opened up the week a perfect 2-0 on Thursday Night and will look to keep that momentum as we share two more player prop picks for this primetime matchup. As always, these props come from TwinSpires Sportsbook, currently our new top-rated sportsbook for 2021.

This is the week we think Aiyuk comes alive for the 49ers. With Garoppolo back in the lineup, coming off from a bye, the 49ers have to get him more involved. His targets per route run are currently lower than Ross Dwelley and Trey Sermon... that can't be true, but it is.

With Kittle out, Aiyuk has to be part of the passing attack. Looking back at last season, Aiyuk averaged 91 receiving yards per game and had 3 touchdown receptions in his last four starts with Kittle out of the lineup.

Aiyuk will primarily be matched up with Xavier Rhodes for the majority of his snaps this week. Rhodes has a PFF coverage grade of just 51.2 this season, which puts him in the bottom 10 of all corners. As a team, the Colts are allowing almost 270 receiving yards per game and have given up 5 passing plays of 40+ yards already this season.

We think Aiyuk hits this number on one reception Sunday night and cruises over the 32-yard prop. Even better? This one is juiced at -114 on the over at TwinSpires.

While we typically try to find an under to play as one of our props, we couldn't pass up on Taylor's rushing total (also at -114). San Francisco's pass defense is playing at an elite level once again. They have allowed the second-fewest passing YPG over their last three games. The QB's they faced over that stretch? Aaron Rodgers, Russell Wilson, and Kyler Murray.

If Indianapolis is going to pull out a win on the road, it will be on Taylor's shoulders. At 62.5 yards, he has gone over this number 3 of his last 4 and narrowly missed against Baltimore two weeks ago, a game where he added 114 yards receiving.

On the season, San Francisco is allowing 4.3 YPC and 113.2 rushing yards per game, both numbers fairly close to the league average, but has played a relatively soft schedule against the run. This matchup with the Colts will be, by far, their toughest test of the season. We think Taylor goes over 62.5 and will gladly play this prop at the current -114 juice.