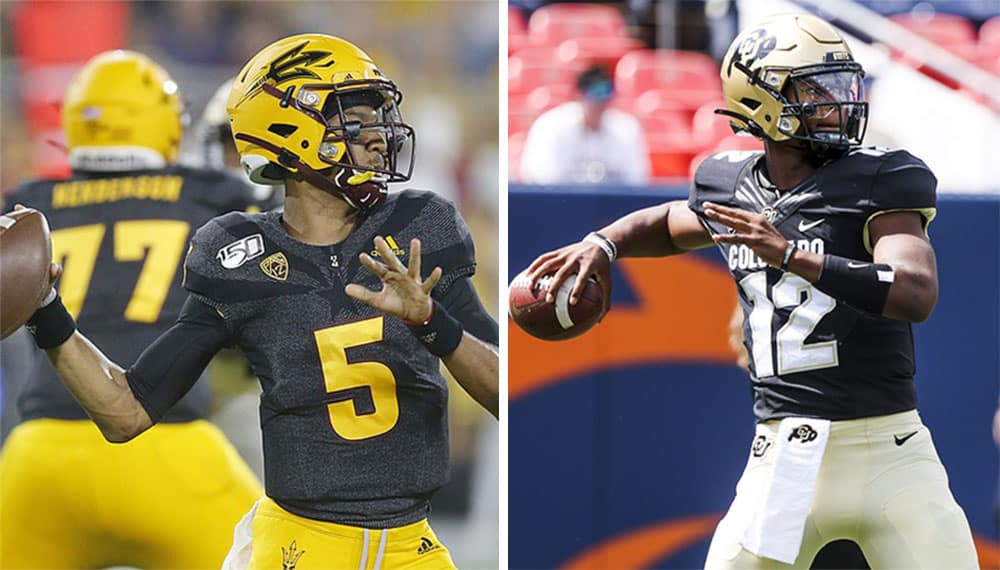 Remember that old Elton John song “Saturday Night’s Alright for Fighting”? That applies to this Saturday night for this PAC 12 matchup between the Colorado Buffaloes and the Arizona State Sun Devils. Since both of these states have recently legalized sports betting, we thought this was a great opportunity to preview this game.

The kickoff for this one is set for 10:30 PM Eastern Time on ESPNU. Colorado (1-2) comes into this game off an embarrassing shutout loss to Minnesota last Saturday. Arizona State (2-1) lost a tough one to BYU by ten points last week.

This game could be a blowout, as the oddsmakers have the Sun Devils favored by 14 to 14.5 points over the Buffs. The total is at either 44.5 or 45 depending on which online sportsbook you check.

Before getting down any action on this or any other game, be sure to pull up our free odds checker. We created this to be a resource for all sports bettors.

With this tool, you’ll be able to quickly find out which book is offering the most value. Here’s a live look at the best available odds for both the side and total of Colorado @ Arizona State.

What to Expect from the Colorado Offense in Week 4

Colorado’s offense has been a train wreck through their first three games of the year. QB Brendon Lewis has a lot of potential but he has only thrown for 246 yards and one touchdown so far this year. The 6-2 225 pound freshman must improve his passing accuracy, as he’s only completing 55.4% of his passes.

The Buffs’ best offensive player is Jarek Broussard, a 5-9 sophomore running back who has 153 rushing yards and two scores. Expect offensive coordinator Darrin Chiaverini to give Broussard plenty of carries in this game, especially with Lewis still struggling to find his footing as a collegiate QB. Broussard is averaging nearly five yards per carry and the Buffs will need him to have a huge game if they expect to pull off a shocking upset on Saturday night.

What to Expect from the Arizona State Defense in Week 4

Arizona State’s defense has plenty of talent and should be ready to play after losing to BYU last week. Linebacker Darien Butler is a jack of all trades as he leads the team with 20 tackles, 2 sacks, and 2 picks. We expect defensive coordinator Antonio Pierce to send Butler after the QB on multiple blitz packages on Saturday.

The Sun Devils defense is only allowing 17 points per game which ranks 33rd in the nation. The secondary has a pair of solid defensive backs in DeAndre Pierce and Jalen Jones, who both have one interception each so far. We don’t see this secondary allowing any chunk passing plays against Colorado’s inexperienced offense.

What to Expect from the Arizona State Offense in Week 4

Though the Arizona State offense shot themselves in the foot too many times last week, they’re still averaging a robust 31.7 points per game. Junior QB Jayden Daniels has thrown for a respectable amount of yards (572) but has hurt the team with three costly interceptions. If Daniels can quit forcing so many tight throws, this offense could be even more productive the rest of the season.

Running back Rachaad White is a dangerous weapon in the backfield, as he leads the team in both rushing (219) and receiving yards (117). He’s also found the end zone five times on the ground. Offensive coordinator Zak Hill has got to give White more carries per game for this offense to reach its fullest potential.

What to Expect from the Colorado Defense in Week 4

Colorado’s offense has been awful, but their defense has done an admirable job so far. Though they gave up 30 points against Minnesota last week, this unit limited #5 Texas A&M to only 10 points a couple of weeks ago. For the season, this unit is only allowing 15.7 points per game (22nd in the country).

Linebacker Nate Landman has been the leader of this Buffs’ defense so far by making 27 tackles and five tackles for loss. This guy seems to be everywhere on the field as he’s broken up three passes and forced one fumble. Colorado fans hope Landman can slow down White and the Sun Devils running game on Saturday night.

Though they let us down last week, we’re going back to the well with the Sun Devils again this week. We don’t love laying this many points in a conference game but we simply do not trust Colorado’s inept offense to do much in this one. As good as Colorado’s defense is, we see them tiring out because of too many three-and-outs by their offense.

We have a feeling that Herm Edwards has his guys focused and fired up after the tough loss to BYU last week. Daniels has yet to find his groove on offense but this could be the game where it all starts to come together for him. Remember, this kid scored 20 total touchdowns as a freshman in 2019.

We see the Sun Devils winning this one going away, 34-7. Lay the points in this PAC 12 battle. Best of luck!