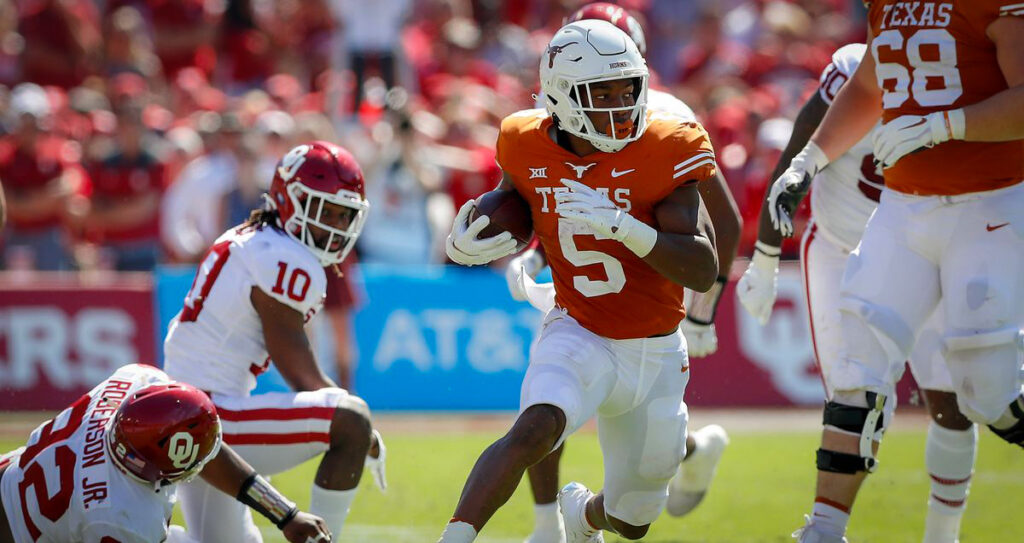 After entering the weekend on a 4-0 clean sweep of the weekday action, we finished our early slate 1-1. Ole Miss started off strong but faltered in the 2nd half allowing Kentucky to get close enough to cover the number. Utah led by 8 at the half before blowing the doors off Oregon State 42-16 which was more than enough for us to get the cover. Let’s take a look at what Saturday’s early slate has to offer us this week.

Texas has been up and down through 4 games this season. They win a game and then lose a game. After demolishing LA Monroe, they took Alabama to the brink but lost 20-19. They then handed UTSA a 21-point loss but followed that with a 37-34 loss to Texas Tech. Last week they took out West Virginia 38-20. Bijan Robinson has been the main bell cow for the Longhorns. He is averaging over 100 yards per game and has 8 touchdowns on the season.

Oklahoma has been on an extremely disappointing stretch over the last 2 weeks. After starting out 3-0 and earning a top 10 ranking, they dropped 2 straight to Kansas State at home and then on the road to TCU. Those losses have come by a combined 38 points. Dillon Gabriel has been strong and has kept the passing offense humming in each game. Defensively, the Sooners have not been able to stop anyone the last 2 games as they allowed 96 points in them.

Oklahoma is an absolute dumpster fire right now. After the 2 bad losses, they now face Texas at the Cotton Bowl and face a running back in Bijan Robinson that is going to drive them crazy. We see the Sooner’s struggles continue this week as a touchdown underdog here.

TCU is off to one of the best starts in recent years as they sit at 4-0 through the beginning of this season. They are coming off the big win over Oklahoma where they looked to make a statement winning 55-24. They are 3rd in the country averaging 48.5 points per game and 4th in the country in yards per game with 549.5. Max Duggan is on pace to make a dark horse Heisman run. He is averaging 250 yards and has thrown 11 touchdowns and no interceptions. He’s also tacked on 2 scores on the ground.

While TCU’s start has been impressive, the Jayhawks’ 5-0 start is the best in a long while. They have defeated some really strong opponents. West Virginia and Houston on the road and more recently, Duke and Iowa State at home. A win over a #17 TCU here would really turn heads. The 218 yards per game they are averaging on the ground is good enough for 31st in the country and has allowed them to control time of possession.

This is going to be the biggest game in recent Kansas football history. In other years when they faced ranked opponents, they had been having bad or mediocre seasons. This year, a win here would get them true national notoriety.

This is going to be the biggest game in recent Kansas football history. In other years when they faced ranked opponents, they had been having bad or mediocre seasons. This year, a win here would get them true national notoriety.

The Tigers are currently 3-2 with both losses being respectable ones. Their 1st was to a good Penn State team and last week to LSU 24-17. Both losses came at home and in fact, they have yet to hit the road this season. The run game has been the stronger point of their offense. They are averaging almost 160 yards per game on the ground. They have had their struggles on 3rd down where they are converting just 34.4% of the time.

Georgia is #2 in the country with a 5-0 record and is coming off a big scare last week. They trailed for most of the game on the road to a 2-2 Missouri Tigers squad. Luckily the defense showed up in a big way in the 4th quarter to force Missouri to punt on their late possessions. Kendall Milton and Daijun Edwards hit the endzone on the ground late in the game to get them a 26-22 victory. They are 8th in points allowed in the country and 31st in points scored.

Georgia is going to be looking to make a statement this weekend. Auburn is a better opponent than Missouri but this is their 1st road game of the season and it is coming at the worst possible place, in Athens after the Bulldogs had their worst performance. Auburn is going to have a really hard time scoring more than 10 points in this one and we expect the Bulldogs to blow the Tigers out and make everyone forget about the stumble against Missouri.

Utah has bounced back very nicely since their season-opening loss to Florida. They’ve rattled off 4 straight wins and are coming off an impressive 42-16 win against a good Oregon State team last week. Cameron Rising is completing 68% of his passes and is averaging 230 yards passing per game. He has tossed 13 touchdown passes and has been picked off just 2 times. Their defense has been tough, allowing just 14.4 points per game which is 21st in the country.

UCLA is undefeated and coming off their best win of the season. Washington was becoming the Pac-12 public darling until last week. UCLA hung 40 points on them in their 40-32 win. The Bruins are averaging 41.4 points per game and are one of the best teams in the country on 3rd down. 54.7% is 11th in the country in 3rd down conversion rate.

UCLA can score, there is no question, but the Utes can keep pace with them and have the advantage on defense. They also have a stronger rushing attack that will allow them to control the pace of play and time of possession. The fact that oddsmakers have made Utah the favorite here on the road is telling us they are going to put a good one together here on their way to another Pac-12 run.

Oregon State was 3-0 early this season before they faced off with #7 USC at home and lost 17-14. Last week, they picked up their 2nd straight loss on the road to #12 Utah 42-16. Both losses are extremely respectable and now head off to Stanford Stadium to take on the Cardinal. The rushing attack is averaging almost 180 yards per game. Chance Nolan was injured last week and Ben Gulbranson finished the game. Nolan is likely to be back this Saturday and will look to get the offense back on track after throwing 0 touchdowns and 6 picks in his last 2 games.

Stanford grabbed the 1st win of the season in game one over Colgate. Since then, they have played 3 ranked conference opponents and have lost all 3 by an average of 16.3 points per game. They have struggled to stop opponents from scoring and are allowing 34 points per game which is 222nd in the nation. Offensively, the passing game is their strength averaging almost 260 yards per game, and Tanner McKee is coming off his 1st game without throwing a pick.

Stanford has all 3 of their losses to good teams in the conference and it is likely true that Oregon State is a step-down and could be a game Stanford will be able to compete in and possibly win. However, this is a spot for the Beavers who have lost 2 tough matchups, to bounce back and get back to their winning ways. That is exactly what we believe will happen here.

The 4-1 Falcons of Air Force are coming off a close 13-10 over the Naval Academy that was a classic smash mouth academy game. Their lone loss came on the road to a Wyoming team that is just 3-3 on the year. In their other 3 wins, they have scored 40+ points each. As always, they are near the top of the country in rushing yards per game as that is all they do. They are averaging 370 yards per game which are 2nd in the nation.

Utah State is on the struggle bus. They won their opener against Connecticut 31-20 and have since lost 4 straight games. Alabama smoked them 55-0 and last week BYU beat them 38-26. They are struggling to score and are averaging just 17.6 points per game and have only converted on 27% of their third downs which is 258th in the nation.

In the 55-0 loss to Alabama, Utah State allowed 278 rushing yards. In the 35-7 loss to Weber State, they allowed 200 rushing yards. Now they face an Air Force team that is near the best in the country in running the ball. Not only that, Air Force is holding teams to just 14.8 points per game. They will have a legit chance at shutting out this Aggies team and the 10-point number should be no problem at all.