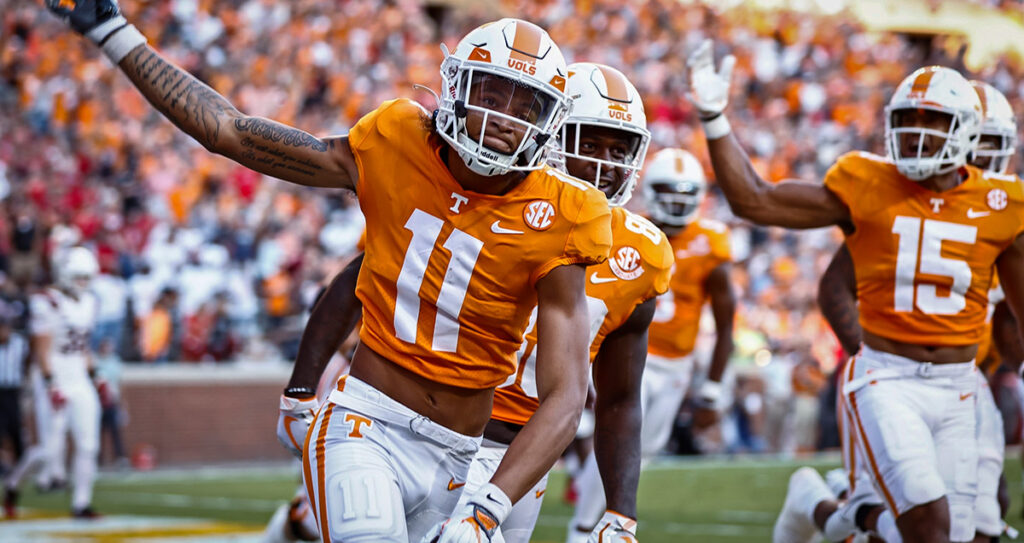 In a loaded CFB week 10 slate, no game is bigger than Tennessee vs Georgia. Give us the Vols!

Is Saturday here yet? This week 10 College Football slate looks like a special one. For the first time since Burrow vs Tua, we have the #1 team in the country taking on the #2 team in the country. And yes, we have a best bet for Tennessee vs Georgia.

Other marquee matchups on this slate include Alabama at LSU, Texas at Kansas State, and Clemson at Notre Dame. Don't lock in your week 10 wagers before reading through our best bets for week 10!

After a tremendous 4-0 start to the season, the Wildcats have hit a rough patch. They are just 1-3 over their last 4 games and most recently got annihilated by #3 Tennessee on the road last week 44-6. It was a terrible offensive performance by the Cats as they only accumulated 205 total yards, went 2 for 13 on 3rd down, and turned the ball over 3 times. The ability to stop Heisman front-runner Hendon Hooker was going to be a near impossibility but we expected the Kentucky offense to put up more than just 6 points.
Missouri sits at .500 on the year after winning back-to-back games. 1st they handled Vanderbilt 17-14 at home before taking down #25 South Carolina on the road last week 23-10. After jumping out to a 14-0 lead early in the 2nd quarter, the Tigers coasted in the 2nd half with just a couple of Harrison Mevis field goals. They forced 2 turnovers while racking up 367 yards of total offense. Wideout Dominic Lovett led the way with 10 receptions and 148 yards.

Kentucky can not afford to have a hangover from the Tennessee debacle and Will Levis needs to turn things around after throwing for less than 100 yards and 3 interceptions last week. Levis was one of the top names in this QB class and if he wants to hear his name called on draft day, he needs to prove he can take a bad performance and turn it around the next week. We believe that is exactly what he is going to do this Saturday.

The Hawkeyes were able to snap a 3-game losing streak last week as they defeated a very weak Northwestern team at home, 33-13. Losses to Michigan, Illinois, and Ohio State proceeded their Northwestern win. The Wildcats were able to hold Northwestern to just 18 rushing yards while going for 173 on the ground themselves. Kaleb Johnson was the go-to guy on the ground for Iowa as he took his 14 carries for 88 yards.
Contrary to the Hawkeyes, the Boilermakers had their 4-game win streak snapped last week when they left Madison with a 35-24 loss to the Badgers. Things were ugly from the start as Purdue fell behind 21-0 after the 1st quarter. Aidan O’Connell was inconsistent and finished with 3 interceptions to just 1 touchdown pass. They let Braelon Allen go over the century mark on just 16 carries and will need to sure up the run defense against the visiting Hawkeyes.

For the most part, this matchup is simply offense versus defense. Iowa is 10th in the country allowing just an average of 15.75 points per game while the Boilermakers are averaging over 32 points per game. As good as the Iowa defense is and can be, we believe that Aidan O’Connell will bounce back and have a much stronger game here at home. If the Boilermakers can get even 75% of their average score, it should be plenty to cover this number.

For the 1st time since 1998, the Vols find themselves ranked #1 in the country after defeating Kentucky last week. Their gift for this accomplishment? They get #3 Georgia on the road in what will be the top game of the season. In the victory over Kentucky, there was no looking ahead to this meeting as they handled business 44-6. All aspects of the Vols looked to be firing on all cylinders. Hendon Hooker has a chance to have a big Heisman moment this week against a defense in Georgia that will be his toughest test.
#3 Georgia took care of Florida last week in Athens 42-20. This was only the 3rd time this season they allowed more than 10 points in a game. Missouri put up 22, as well as, Kent State. Now, do we think this is a major concern? No, but it does prove to many that the Dogs can be hurt on the scoreboard at times. Stetson Bennett threw 2 touchdowns but also gave the ball back to Florida twice on interceptions. Georgia lost the turnover battle 3-0 but was able to overcome their mistakes last week.

Georgia has shown some holes in their game over the past few weeks. Tennessee has not and looks to be improving after each game. Hendon Hooker will lead the Vols to a cover and possible road upset here. Stetson Bennett can not give the ball away at all in this one against a quick-strike offense like Tennessee. The total is over 66 and this should be a good sign for the #2 offense in the country.

Oklahoma State is a team that looks to have multiple personalities, at least over their last 3 games. After losing on the road 43-40 to #13 TCU, they bounced back and defeated #20 Texas at home 41-34. After that win, they rolled into Manhattan, Kansas as 2.5-point dogs and got their doors completely blown off. Down 35-0 at the half, they ultimately lost 48-0 and did absolutely nothing offensively. The loss marked the 2nd loss of the season for the Cowboys with both coming on the road.
Kansas has now dropped 3 straight games after losing on the road to Baylor 35-23 last week. They were down 28-10 at the half but did not fold. With under 7 minutes let in the game, Jason Bean ran one in to cut the lead to 5 before Richard Reese answered to put the game away. This week will mark the 1st of 3 games in which Kansas will face a ranked opponent down the stretch.

Being home against a team that was just embarrassed is not the worst spot to be when you are trying to snap a losing streak and that is exactly where Kansas finds themselves. Kansas will need to get back to their roots of a strong run game and control the time of possession in this one. Being 8th in 3rd down conversion rate will help them sustain drives and keep Spencer Sanders and the Pokes offense off the field.

Clemson comes into this contest 8-0 on the season and while that doesn’t seem as if it should be much of a surprise given the program’s recent history but this has been a great run for the Tigers. They have wins over then #21 Wake Forest, #10 NC State, and most recently defeated #14 Syracuse. They overcame 4 turnovers against the Orange and dominated the run game by going off for almost 300 yards. Will Shipley looked impressive going for 170 yards and 2 scores. They held Garrett Shrader to just 167 yards passing and got to him 5 times for sacks.
Notre Dame has been unpredictable this season. After going 0-2 to start the season, they have gone on to win 5 of their next 6 but that lone loss was to an inferior Stanford team at home. Last week, against #16 Syracuse on the road, ND went for 250 yards on the ground and held the Orange to only 60 yards rushing. Audric Estime broke out for 123 yards on 20 carries for 2 scores for the Irish. Besides their last game against USC, this will be the toughest game of the final stretch for ND.

Losses to Marshall and Stanford both came at home for this ND team. Maybe the pressure seems more at home but they just seem to struggle on their home field. Clemson has been the opposite on the road. Will Shipley will be used a ton against the Irish run defense and DJ Uiagalelei will just need to avoid turning the ball over for the Tigers to be successful. We believe Clemson puts the wood to the Irish here on the road.

The Noles have finally snapped their losing streak last week by defeating Georgia Tech 41-16. They lost 3 straight to ranked teams prior to GT. #22 Wake Forest, #14 NC St, and then #4 Clemson were all losses but respectable ones. After going down 3-0, FSU turned the switch and ran away from with 24 unanswered points. FSU went for almost 250 yards on the ground and almost 400 yards through the air. That helped them overcome the 2 turnover deficit. The run game has been the driving force for this Noles team and will be what they use to attack Miami this weekend.
Miami has won 2 of their last 3 and most recently defeated Virginia 14-12 on the road. It wasn’t a pretty win and it took 4 overtimes to get it but the Canes will take a win any way they can this season. At 4-4, they are fighting to stay bowl eligible and will be extremely tested over the last 4 games of their season. The Canes have had a decent passing attack all year but leaned on the run game against Virginia in their latest win. Things could change this Saturday against a Noles team that will pressure Jake Garcia if he drops back to pass.

This is one of the oldest rivalries in college football and when we see a game like this, we like to play the dog, especially if they are at home. Statistically, the Canes are below the Noles in nearly every category but those stats won’t mean too much in this rivalry game. We believe this will stay close throughout and the points will certainly come into play. Getting over a touchdown is too enticing to pass up here.