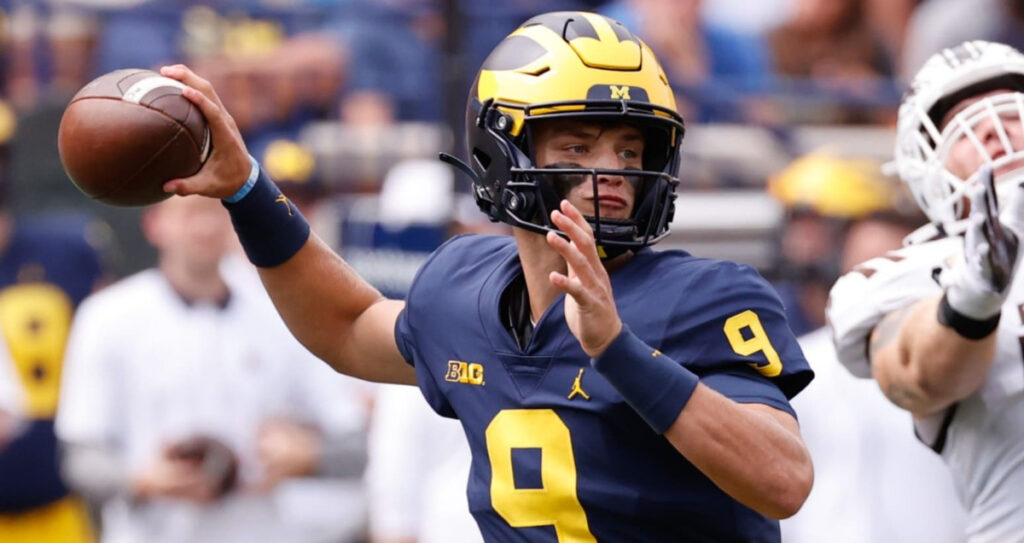 Because of Michigan's dynamic running game, we don't see JJ McCarthy doing much with his arm against TCU.

The wait is finally over! The College Football Playoff kicks off within hours, and there are bound to be some highlight performances. If you're wanting some extra action for TCU vs Michigan, you've come to the right place.

The game kicks off at 4 PM Eastern, and you can bet it'll be highly entertaining! Let’s look at the best college football player props from this game and start the new year off right. We've found some value on two quarterbacks and two wide receivers. Let's cash!

The University of Michigan’s football team has been one of the NCAA’s best rushing teams this season. Averaging over 240 rushing yards per game, Michigan can run-and-tumble their way to first downs, which will cause headaches across the board for TCU’s defense.

We like the under on McCarthy’s passing yards. In fact, in the 12 games that he has started, McCarthy has eclipsed this number just six times but has only hit the over in two of his last seven. McCarthy’s passing numbers are trending down, making the under a smash play for us this week.

Duggan worked his way into the Heisman Trophy conversation after an impressive finish to the season. He is certainly a prolific passer but has gotten it done on the ground as of late as well, rushing for over 45 yards in two of his past three games.

TCU will likely find themselves behind in this game, meaning that Duggan will have to carry the bulk of the team’s work, both from a passing and rushing perspective. We like the over for Duggan’s rushing total today for this reason.

Although Bell hasn’t necessarily lit the box score on fire this season, he has been a reliable receiving option for Michigan. If Michigan takes an early lead, look for them to turn to sure-handed Bell to make plays down the stretch.

Plus, Bell has hit the over on 3.5 in five of his last eight games, which is why we recommend taking this play. It's so good to see that this kid is finally healthy again!

If Duggan is going to have any success against the Michigan defense, he is going to need to turn to Johnston to do so. Johnston has vaulted his NFL Draft stock as of late, and the junior receiver is almost going to be playing on Sundays in the near future.

Not only has Johnston had over 68.5 yards in five of his last seven games, but he’s had over 130 yards in three of those games. Johnston’s impact cannot be understated for the TCU offense, and he should come up big again for them in the most important game of their entire season.