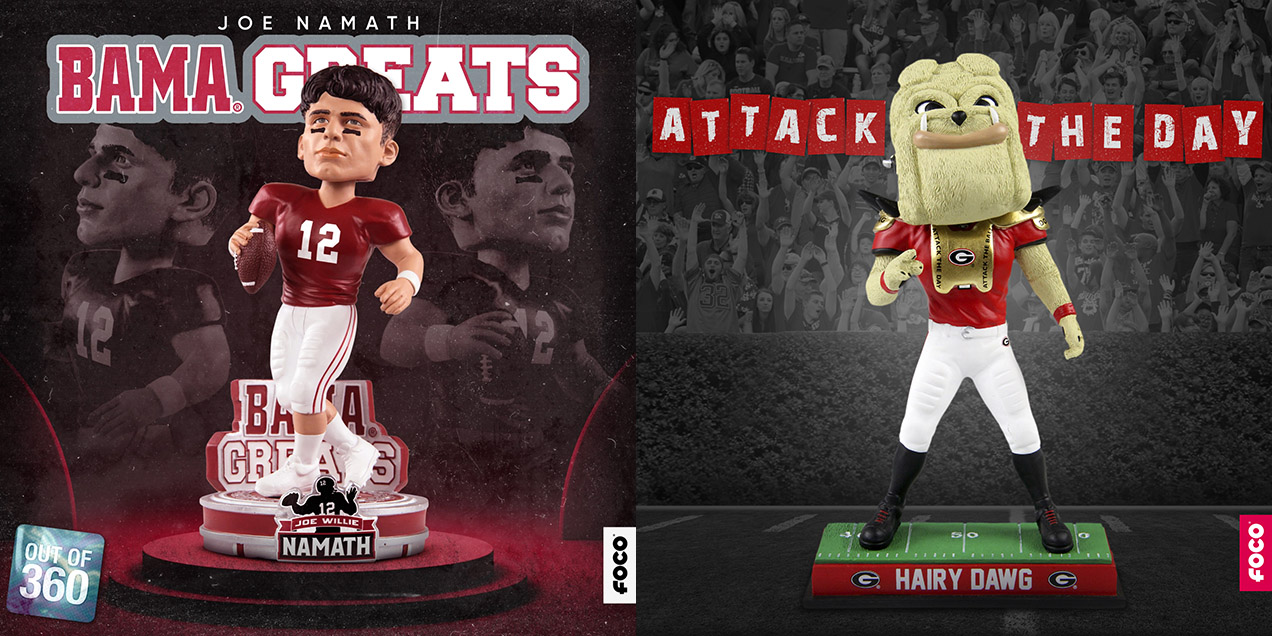 Our Favorite College Football Bobbleheads for 2022

Football season is here, which means that there are dozens of programs around the country hoping to make the next great run. College fan bases can be particularly crazy, showing their support in any number of ways.

One of the best ways to show your favorite school love is by getting an exclusive bobblehead showing off their colors, history, and pride. Here are some of the best bobbleheads for college football nuts this season.

Florida has turned out some legendary players throughout the years. Perhaps the best of the bunch, and arguably the best player in the history of college football, is Tim Tebow. Gator fans will cheer him on as he is finally inducted into the school’s Ring of Honor.

Tebow was the man at Florida, helping them to back-to-back national championships while also winning the Heisman Trophy. He became one of the most dynamic, exciting college football players to ever lace ‘em up.

Tebow shows his trademark smile, wearing the classic blue and orange home uniforms of the Gators. He stands on a Ring of Honor podium, featuring multiple decks ringed in Gator orange. Behind him is a placard of his famed #15 jersey, which will become part of Gator lore from now on.

Ohio State has turned out a litany of great receivers, particularly in recent years. Given his production while playing in front of the ‘Shoe faithful, Olave looks ready to cement his place among that long list of receivers.

Fans of the Buckeyes will certainly appreciate this bobblehead. Olave stands with his arms out, no doubt celebrating the latest in a long line of touchdown receptions. He wears the famous red and silver of Buckeye lore, his trademark number 2 on the front.

Behind him is the ‘Shoe itself, the famed Ohio Stadium. A gate entrance to the stadium signifies that this is his house and he’s ready to defend it. A must-have for Buckeyes fans anywhere.

There are a ton of legends that have come through Tuscaloosa. Before the Crimson Tide became arguably the most dominant force in the history of college football with their latest run, they were known as the home of Broadway Joe.

That’s right, Joe Namath was the famed quarterback of the Crimson Tide before managed to lead the greatest upset in Super Bowl history. Namath stands on this bobble head in the crimson #12 he made famous, eyeing his downfield targets.

The front of the base features his silhouette, as well as his full name and nickname (Willie) against a crimson background. Behind Namath himself, in the crimson and white of Alabama, is the “Bama Greats” moniker. A must-have for Crimson Tide diehards.

The Bulldogs leapt over hurdles throughout the 2021 season to finally claim their place as the best team in the nation. Even a mid-season hiccup to Alabama couldn’t stop them from finally overcoming their rival on the biggest stage.

Fans of the Bulldogs will want to remember that magical season for a long time to come. One of the best ways to do so is with this Travon Walker bobblehead. Not only does it recognize the accomplishment of the Bulldogs, but the first overall pick in the 2022 NFL Draft.

Walker stands tall on this bobblehead, wearing the red, white and black of the Bulldogs. In front of him is the crystal national championship trophy, standing just above his name spelled out over a placard and a dog collar base.

Standing behind him is the national champions moniker, something that will immortalize him in history. More importantly, it is a great way to recognize the special season had by not only Walker, but the Georgia program at large.

The Texas A&M program is rich with history. In recent years, they have emerged as a threat to the SEC, challenging the big dogs each and every season. Over that time, they have managed to put out some great talent as well.

One of those talents is former first-overall pick, defensive end Myles Garrett. During his time at College Station, Garrett made his name as one of the most feared defensive line prospects to ever lace them up. It comes as little surprise that he would go on to become the first pick in the NFL Draft.

Despite Garrett’s smiling face on this bobblehead, he is coming for the quarterback. The base mirrors a slab of marble with Garrett’s name scrawled on it. Behind him, a monument to his being one of the Aggie greats is featured in the maroon and white of the program.