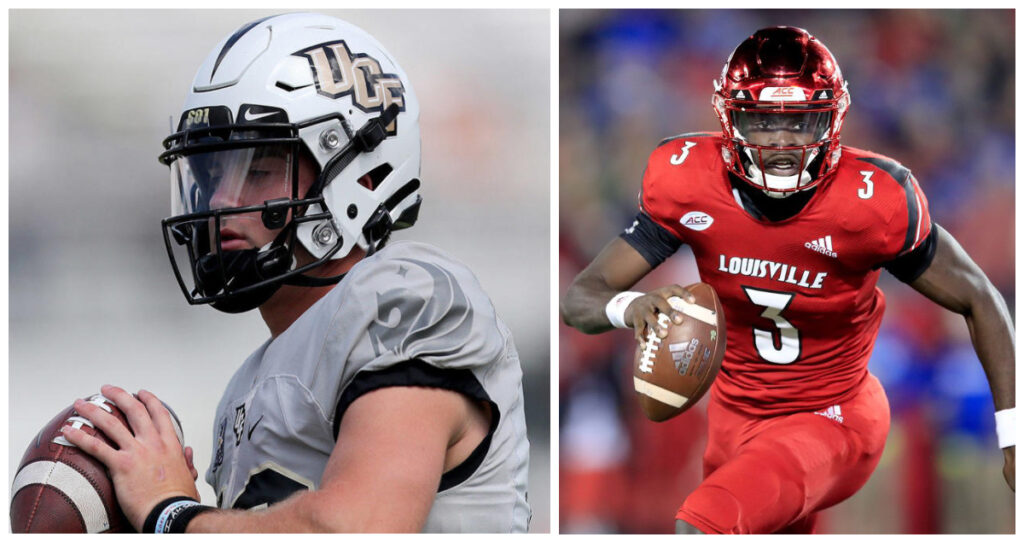 One of our college football best bets for Friday involves John Rhys Plumlee of UCF and Malik Cunningham of Louisville.

Last Friday we went 1-1 on our college football plays as our double dip on the dogs fell short. Old Dominion didn’t need any of the 8.5 points they were given as they handled Virginia Tech 20-17. They outscored the Hokies 10-0 in the 4th to finish them off.

Temple, on the other hand, needed about 24 more points to get the cover. After falling behind 24-0, Duke coasted in the 2nd half to a 30-0 final.

This Friday is a 2-game slate with Louisville heading to Central Florida and Boise State taking on New Mexico at University Stadium in Albuquerque. The Cardinals are coming off a 31-7 loss at Syracuse and UCF smoked the Bulldogs of South Carolina State 56-10.

In the other action, New Mexico is coming off a 41-0 shutout of Maine and Boise St is licking their wounds from the 34-17 loss to Oregon State. Let's bounce back with 2 college football best bets for Friday, September 9.

In their 31-7 loss at Syracuse, the Cardinals were outgained 207 to 137 on the ground. While that was telling of the outcome, the turnover story is what put the nail in the coffin. Malik Cunningham threw 2 interceptions and added a fumble to total up to 3 turnovers for the Cardinals compared to the 0 that Syracuse put up.

Tiyon Evans was the bright spot for Louisville as he took his 13 carries for 89 yards and a score. Tyler Hudson chimed in with 8 catches for 102 yards in the loss.

The Knights scored 28 points in each half on their way to the 56-10 victory over the visiting Bulldogs last week. From start to finish the Knights completely dominated the game. UCF outgained South Carolina State 600 to 91 in total yards and 29 to 9 in 1st downs.

With as bad as Louisville looked and as good as UCF looked, it would be logical to play the Knights here. Looking deeper, the Knight victory of South Carolina State really is not that impressive. And while the Cardinals lost as favorites last week, the Orange of Syracuse are not as bad as many experts believed.

The fact that the oddsmakers have set this spread under a touchdown seems a bit off to us. Nearly 70% of the public is on UCF here and the line has not budged. We believe Cunningham will hold onto the ball better in this one and be in the game to the final drive.

Boise State quickly fell behind to Oregon State 24-0 after the 1st half. They were able to crawl back within ten with 13 minutes remaining in the game but Oregon State’s Jack Colletto put an end to the comeback as he scampered 41 yards to paydirt just two minutes later.

The Broncos coughed up the ball five times and let the defense get to the quarterback twice for sacks. Taylen Green did cross over the 100-yard mark on the ground and scored both the Broncos' touchdowns.

Ten different Lobos toted the rock en route to those 267 yards but we can expect less variety in this matchup as the Lobos will likely be the ones trying to keep up with the Broncos.

Boise did not look their best at all last week at Oregon State. Truthfully, the line is a bit high and the Broncos may struggle to pull away.

However, Taylen Green of Boise should cause New Mexico some serious problems on the ground and if he is successful, he will set up the play-action passing attack that could be the difference in this matchup. We think Boise takes this one by at least three touchdowns!