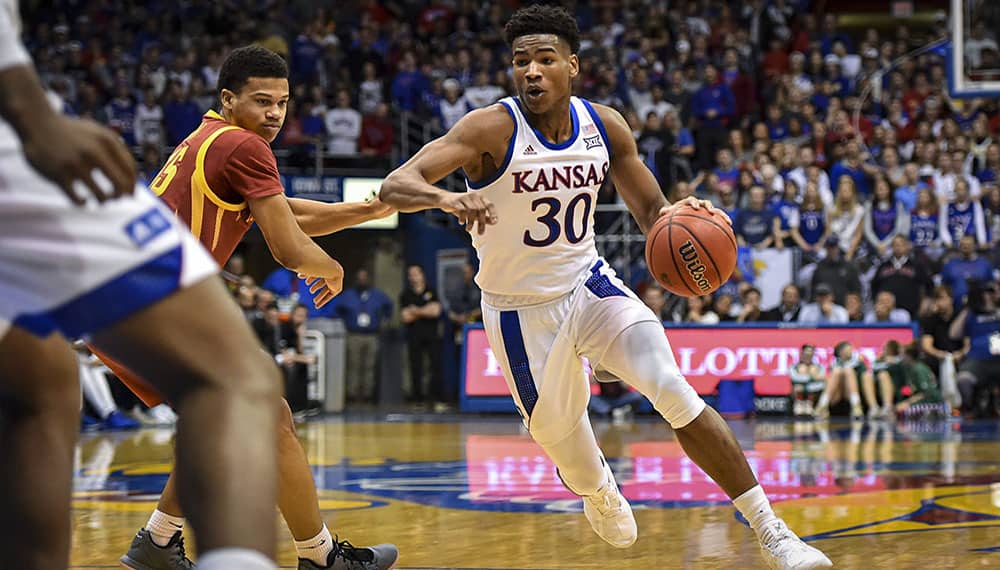 The NCAA season has kicked off to a roaring start in 2021, with one of the better non-conference tournament schedules in recent memory. There’s nothing like starting to bet seemingly “random” mid-majors at 12pm on a Tuesday afternoon.

This article will look to find some value in the NCAAB futures market after we’ve gotten a first look at these teams over the first few weeks of the season. For what it’s worth, I don’t currently have any pre-season bets on this market. I’ll highlight the short shot favorites, teams to look out for, and teams that still have value.

Teams Atop the Poll

Gonzaga is once again showing why they are the consensus #1 ranked team in the country and why they are the short shot favorite to win the national title. They are a juggernaut offensively once again, led by Drew Timme and Chet Holmgren. Timme and Holmgren rank #2 and #5, respectively in kPOY, or KenPom Player of the Year.

The Zags opened the season at 6/1 or +550 following their loss to Baylor in the National Championship game last season. This has come down slightly as Gonzaga is off to a great start, the best odds you can find are 4/1 or so.

The storied career of Mike Krzyzewski (Coach K) is coming to a close in 2022 and Duke will look to get him his sixth national title as head coach. In 2021-22, Duke has what it’s been missing for the last two years, a bonafide star and NBA prospect. There was some concern after Paulo Banchero was involved in a DWI incident, however, he himself was not the driver. Banchero seems to finally have his legs under him after some early conditioning concerns.

Duke opened at 15/1 to win the national title, but have moved down to 8/1 at best. Duke has a 7-0 record thus far and is coming off the biggest victory of the year, taking down Gonzaga in Las Vegas. It’s too early to say that Duke has “peaked”, but when a team has this level of attention, even a blue-blood like Duke, it doesn’t bode well for value in the futures market.

Perhaps the biggest mover in price thus far has been the Purdue Boilermakers. They opened the season at 40/1 in some spots and that number has crashed to 10/1 or less. Purdue currently sits at #3 in the AP Polls and for good reason. Trevion Williams is a consensus All-American, 7’4 Zach Edey is dominating in an expanded role, and sophomore Jaden Ivey has taken a big step forward.

Purdue has retained essentially the whole roster and is in prime position to take advantage of vast improvement across the board. The 2020-21 Boilermakers were disappointing at best, finishing 4th in the Big Ten and losing in the first round of the NCAA Tournament to 13-seed North Texas. Purdue is a team to watch out for in 2021-22, however, we’ve lost way too much value to put our money up at this price.

Now that we have covered the current CBB Title odds and the betting favorites, let's take a look at two bets that I'm making today and why these two teams stand out at their current odds.

The first bet I’m getting in for this season is going to be on the Kansas Jayhawks at 15/1. Kansas opened the season at 16/1, but I don’t think the edge is lost here. Kansas’ biggest problem as a true juggernaut in 2020-21 was at times a lack of playmaking.

They were one of the best defenses in the league, but Marcus Garrett at lead guard often struggled to make plays for his teammates. Bill Self looked to solve that problem through the transfer portal, bringing in Remy Martin from Arizona St. and Joseph Yesufu from Drake.

Remy Martin has slid into the starting lineup with ease, and Yesufu is providing some much-needed depth at guard. Ochai Agbaji is still one of the best players in the Big 12 and remains the most important player on this Kansas team. The reason for waiting on this bet was to get a look at how Kansas would mesh with their new players and it seems the experiment is working.

Aside from Marcus Garrett, Kansas brings back many of their important pieces including David McCormack, Christian Braun, and Mitch Lightfoot. Kansas is looking like a well-oiled machine with their veteran roster and impact transfers. They currently rank 4th in KenPom adjusted offensive efficiency, which is exactly what we are looking for.

If Kansas can retain a spot in the top-ten offenses they are an extremely dangerous team, as usual, come March. 15/1 for what feels like a top-three team is enough value for me.

There were many question marks surrounding the Arizona Wildcats after the firing of head coach Sean Miller. The Wildcats have been a strong program in the PAC-12 under Miller and have produced numerous NBA draft picks including DeAndre Ayton, Aaron Gordon, and more.

Former Gonzaga assistant Tommy Lloyd has been given the challenge of rebuilding the Arizona program and name after the FBI wire-tap debacle. The 2021-22 Wildcats rely on their “Twin tower” big men Christian Koloko and Azuolas Tubelis.

Tubelis is a Sean Miller recruit out of Lithuania, but is thriving in his sophomore season. We can expand this list of thriving sophomores to include Bennedict Mathurin and Estonian Guard Kerr Krisa. Arizona has also gotten two impact transfers to bolster their guard depth in Justin Kier and Kim Aiken.

Arizona is a huge team that looks to get easy baskets inside by working the post and getting Tubelis pick-and-pop opportunities. Arizona is top-30 in KenPom adjusted offensive efficiency and 11th in defensive efficiency. Arizona will be near impossible to score on inside, and possess multiple long wing defenders to defend the perimeter.

Arizona is loaded with length, athleticism, and European talent in 2021-22. Books have already adjusted to the Wildcat’s fast start, as we’re seeing 30/1 or 35/1 at most spots around the market. However, there might be some spots still napping as you can find Arizona at 50/1 at both BetRivers (Sugarhouse) and PointsBet. Shop around!

Arizona was unranked pre-season but is now at #17 and has a huge victory against Michigan under their belts. I expect a strong year in the PAC-12 from Arizona and I don’t think you’ll find a better number at any point this season. 35/1 is playable, but I strongly recommend a play at 50/1 if you have access to those markets.