College Basketball Best Bets: Back These 4 Favorites on Saturday 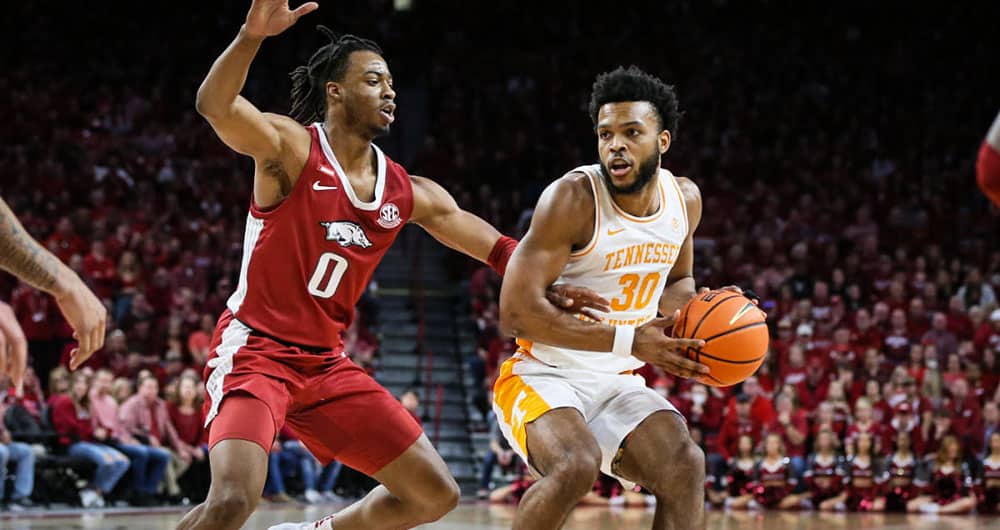 It's hard to believe that today is the final Saturday of college basketball's regular season. In fact, today's slate already includes the OVC Championship game between Morehead State and Murray State. Teams are still fighting for seeding in Power 5 conferences, with the majority of these tipping off their conference tournaments mid-week next week.

In total, we have 17 ranked teams on the schedule today and two matchups between ranked teams: Arkansas at Tennessee (-6) and USC at UCLA (-7.5). Our 4 best bets from today's loaded slate are all favorites, three of which are playing at home.

This will be the 1st meeting on the season between the two and will be the final game of the regular season for both. Foster Loyer is questionable with a lower-body injury for the Wildcats and his status could play a pivotal role in how this game plays out. He is tied for leading scorer honors on Davidson with Hyunjung Lee as they both average 16.4ppg and he is their leading facilitator with 3.5 apg.

Davidson has an opportunity on Saturday to win their 2nd ever A-10 regular season title. Their previous one came in the 2014-2015 season. They are entering the contest on a 5-game win streak and have been solid on the road all year, going 9-1 away from their home floor. If Loyer is a no-go, Lee will need to step up and play an even more prominent role than he has all year.

In their latest win, the Wildcats picked up a 73-62 home victory over George Mason. They held the rebounding edge by 8 boards and shot over 50% from the field. The Patriots were hot from the perimeter as they knocked down 11 of 27 attempts but shot just 38.2% from the field overall. Lee led the Wildcats in the absence of Loyer with 18 points and 8 boards. Luka Brajkovic picked up 15 points and 6 boards along with 3 assists in the win.

The Dayton Flyers have the potential to move to the 2nd seed with a win and some help from others in the conference. At worst, they will stay in the 3rd seed which means they are ensured a double bye no matter the outcome. This is the final home game of the season but not the final home game for almost all Flyers as only one senior is on the roster. The Flyers are winners of 9 of their last 11 games and snuck out a close one in their last game.

The Flyers are coming off a 55-53 win on the road in Richmond on Tuesday night. In a game where neither team led by more than 5 points throughout, the Flyers took the last 5-points lead with a minute and a half remaining to hold onto the win. Their 10 offensive rebounds negated the turnover margin of -5 for the Flyers. Interestingly, the Flyers finished with 4 scorers in double figures but their leading scorer on the season, Daron Holmes II was not one of them. Toumani Camara was the main man as he led them in scoring with 11 points and rebounding with 12. Holmes will need a stronger effort Saturday to win their final home game of the year.

The Flyers will have the top-ranked defense in the conference going against the top-ranked offense in the conference according to efficiency ratings. Flip the script, and the Flyers sport the #3 ranked offense compared to the Wildcats’ 7th ranked defense. Dayton shoots over 40% from deep in conference and will lean on that shooting to put down the Wildcats. Solid perimeter shooting combined with a frustrating defense will spell victory and cover for the Flyers.

ACC regular season play will come to an end for both the Virginia Tech Hokies and Clemson Tigers when they face off Saturday at the Littlejohn Coliseum. Neither team can move up in seeding for the ACC tournament with a win but they could potentially drop with a loss. Clemson would most likely need to win the ACC Tournament in order to gain a birth into the big dance. Virginia Tech, however, is currently the 4th team out of the NCAA Tournament. With a win here and another 1-2 wins in the ACC Tournament, the Hokies could be dancing on selection Sunday.

The Hokies play at one of the slowest paces both on offense and on defense. The average possession length on either end of the court ranks them in the low to mid-300s in the country. That said, they are the 4th best three-point shooting team in the country at 39.2% on the year. They will look to play slow but also shoot from deep in this one to sneak out a road win and keep their NCAA Tournament chances alive.

The Hokies come off a thrashing of the Louisville Cardinals at home on Tuesday night 75-43. The Hokies forced 18 turnovers while committing just 8 of their own. They held the Cardinals to just 7 free throw attempts in the game and just 36.3% shooting from the field. The Hokies also shot 12 of 28 for 42.9% from long distance. Justyn Mutts led the Hokies with 14 points and 10 boards, along with 6 assists.

This Clemson team has been all but eliminated from NCAA Tournament contention, yet they are continuing to play tough down the stretch. Just like the Hokies, they are on a 3-game win streak as they head into this final contest of the regular season.

Their latest win, 68-65 over Georgia Tech, was a microcosm of their continuous efforts to keep fighting. They went into the break down 6, and even saw Georgia Tech extend that lead to as much as 13 in the 2nd half. However, the Tigers kept fighting and made their way back to take the lead in the final minute and pick up the win. They were able to shoot 52.8% from the field while holding the Yellow Jackets to sub 45%. David Collins led all scorers with 19 points and added 7 boards and 5 assists. He was the only Tiger in double figures which will need to change on Saturday for them to fend off the Tournament seeking Hokies.

The Hokies are essentially playing for their postseason lives. If they were to lose this game, they would likely need to make a run to the ACC finals at the very least in order to get into the NCAA Tournament. Clemson has been on a nice run lately but none of those teams were playing with as much on the line as the Hokies are. Combine that with the fact that PJ Hall is still questionable, I like the Hokies to win this one on the road.

The East Carolina Pirates head to Wichita State to face the Shockers in the finale for both teams’ regular seasons. The two were scheduled to meet back in late December but the game was canceled and now will be facing each other for the 1st time this season. ECU leads the Shockers by 1 game in the standings, but with a win, the Shockers can hop on them and move up their seed for the conference tournament.

East Carolina’s #1 priority in this matchup with Shockers needs to be to protect the rock and limit their turnovers. If they are to let this pesky Shockers defense force them into a multitude of turnovers, like they are capable of, they could get run out of the building.

The Pirates are coming off a 64-59 home win over the visiting Tulsa Golden Hurricane. The Pirates forced Tulsa into 20 turnovers, while only committing 8 themselves. The turnovers turned into 12 more shot attempts for the Pirates and they needed every one of them. They shot just 38% to Tulsa’s 44% from the field. Tristen Newton was on fire all night. He finished with 27 points to lead all scorers and was 4 of 5 from distance. Vance Jackson contributed 12 points as the only other Pirate to reach double figures. They will need more contribution from their supporting cast on the road in Wichita on Saturday.

Wichita State is coming off a 72-62 road win over the same Tulsa team that ECU struggled against in their most recent game. The Shockers led by 9 at the half and kept Tulsa at bay the rest of the way in the 2nd half. The Shockers held Tulsa to just 16.7% from beyond the arc and absolutely demolished them on the glass 44-19. Tyson Etienne led all scorers with 18 points on 6 of 11 shooting from the field. Big man, Morris Udeze dropped 15 points and scooped 8 boards, 4 on the offensive end in the win.

I do not expect much of a contest in this matchup. The Pirates should get dominated on the boards and the Shockers defense is likely going to be too much. The number of Pirate turnovers may end up being higher than their rebound total which would be a serious issue. The duo of Etienne and Udeze should be able to get enough done on the offensive end to pick up this cover.

Tennessee was held to its lowest point total of the season (48) in its previous meeting with Arkansas on the road. The Vols have had success as home favs against ranked opponents. They won and covered at home against #3 Auburn, #4 Kentucky, and #13 LSU. With a win and a Kentucky loss, the Vols can get the 2 seed for the SEC tournament.